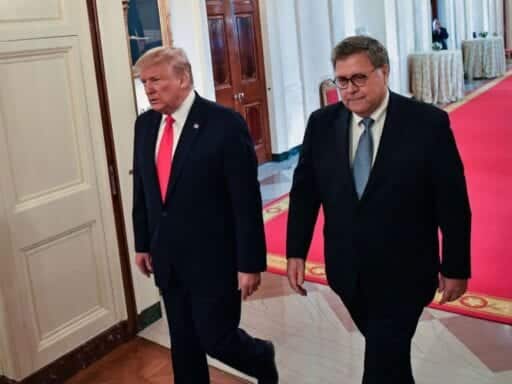 New reports from the New York Times and Washington Post shed light on this effort.

Attorney General Bill Barr has been personally urging foreign governments to cooperate with an investigation into the origins of the FBI’s Russia probe during trips abroad — and President Donald Trump himself asked the prime minister of Australia to help Barr out, several news outlets reported Monday.

Though this is being breathlessly mentioned in the same context as Trump’s request that the Ukrainian president investigate Joe Biden, it’s a somewhat different situation, one that raises its own concerns about whether Barr is politicizing the Justice Department to serve Trump’s electoral needs.

What Trump is talking about here is a probe from US Attorney John Durham into the origins of the Russia interference investigation. The scope and the nature of Durham’s probe aren’t entirely clear, but Trump supporters have high hopes that this investigation will reveal some sort of malfeasance that will vindicate the president’s claims that he was the victim of a “witch hunt.” Trump himself has been calling for such a probe for years, and Barr launched it earlier this year.

Now, the Washington Post’s Devlin Barrett, Shane Harris, and Matt Zapotosky reported Monday that Barr has been personally involved in meeting foreign intelligence officials to try to get their help with Durham’s probe. This involved a trip to Italy just last week, as well as a previous trip there, and requests to both British and Australian officials.

The New York Times’ Mark Mazzetti and Katie Benner, meanwhile, reported that Trump recently “pushed” Australia’s prime minister to help Barr with Durham’s investigation. Trump did so at Barr’s request, they report. And the AP reports that Trump has made other introductory phone calls for Barr in relation to the Durham probe.

So unlike the Ukraine scandal that launched House Democrats’ impeachment inquiry, this isn’t a free-range effort to get a foreign government to provide dirt on one of Trump’s 2020 opponents.

But it is an investigation with political implications, one that the president and his attorney general have taken a keen interest in. And Trump’s requests may well have been perceived by these foreign officials as requests for “favors,” as with the Zelensky call.

So to the extent that Trump and Barr’s demands have taken an inordinately high priority in American foreign policy, they may weigh on House Democrats’ minds going forward as they pursue their impeachment inquiry.

What we know about the Durham investigation

The background is that when President Trump was embroiled in special counsel Robert Mueller’s Russian interference investigation, he and his supporters frequently called for an investigation of, well, the investigation itself.

And just a few months after Barr was confirmed as Attorney General back in February, Barr tapped Durham, the US Attorney for Connecticut, to look into the origins of the probe.

What, precisely, Durham is looking into isn’t entirely clear. But more recently, the Justice Department has said that Durham is “exploring the extent to which a number of countries” played “a role in the counterintelligence investigation directed at the Trump campaign during the 2016 election,” according to a recent Justice Department statement.

Four particular countries have surfaced in news reports as being scrutinized by Durham: Australia, the United Kingdom, Italy, and Ukraine. (For three of those countries, Trump specifically said in public remarks in May that he hoped Barr would look into them.)

Australia’s import is clear. In May 2016, Trump campaign foreign policy adviser George Papadopoulos met Australian diplomat Alexander Downer for drinks at a London bar. There, Papadopoulos reportedly told Downer that he knew that the Russians had dirt on Hillary Clinton. Two months later, after DNC emails hacked by Russia were posted by WikiLeaks, Downer tipped off the US government about what Papadopoulos had told him.

Shortly afterward, at the end of July, the FBI officially opened its counterintelligence investigation into Trump campaign aides’ Russia ties. So Australia is, in a sense, responsible for the creation of what would later morph into the Mueller investigation.

Downer’s information seemed to be good: Papadopoulos had indeed gotten a tip from a source he believed to have Russian ties, Maltese professor Joseph Mifsud, about Russia having emails related to Clinton. He shared this information with others and later pleaded guilty to lying to the FBI about his contacts with Mifsud.

But lately, Papadopoulos has been claiming he was set up by officials from Western intelligence agencies and insisting Mifsud may have been on some Western government’s payroll. No information has yet surfaced to vindicate these claims, but Barr may be looking in to them.

What Barr and Durham hope to get from the United Kingdom and Italy isn’t as clear, though they may also relate to Papadopoulos or to the Steele dossier allegations (which were assembled by a former British spy) or to information collected about another Trump campaign aide, Carter Page.

As for Ukraine, the DOJ confirmed that Durham is scrutinizing the Ukraine. The department said he had not “yet contacted the Ukrainian government,” but that “certain Ukrainians who are not members of the government have volunteered information to Mr. Durham, which he is evaluating.”

In addition to insisting that Ukrainian president Volodymyr Zelensky investigate the Bidens, Trump also said they should investigate the DNC server and whether it was “in Ukraine.” It is unclear if this relates to Durham’s probe.

The argument from Trump supporters in defense of Durham’s probe is that either foreign or domestic officials were spreading bogus accusations about Trump and his associates’ Russia ties to try and drum up an investigation against him for political reasons. But while it is of course possible that some sources in the process had less-than-pure motives, many of these concerns have been based in conspiracy theories popularized in conservative media outlets.

Trump critics, meanwhile, have feared Durham’s investigation will be a political hit job used as a pretext to smear law enforcement or intelligence officials, either in the US or abroad, for simply doing their jobs and pursuing a legitimate investigation into Trump’s Russia ties. Durham’s reputation as a straight shooter helped ease those fears for a time but the newly reported involvement of Barr may well worsen them.

More than 100 people arrested in Ohio immigration raid
Why Trump taking credit for the Covid-19 vaccines could be a good thing
What Amy Coney Barrett’s confirmation will mean for environmental law and Joe Biden’s climate plan
Registered to vote? Here are the voter registration deadlines in all 50 states.
This week in TikTok: Are you cottagecore or more “dark academia”?
Amazon, Apple, and Google are working together so that your “smart” home works better