Trump and Putin: what we know is damning 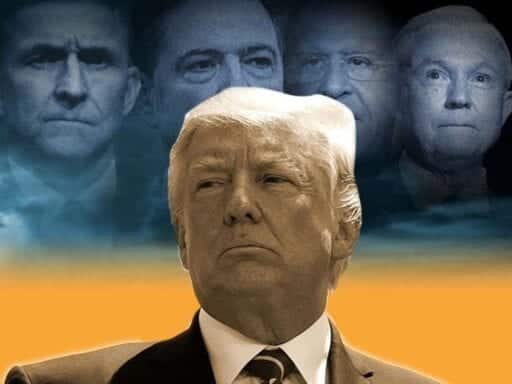 In Helsinki, Trump’s true message to Putin will be: “Thank you.” And we have no idea what to do about it.

Trump was referring to the emails Hillary Clinton had deleted as irrelevant to her work at the State Department. That is to say, he was asking, straightforwardly and publicly, for Russian agents to break into Clinton’s computer systems, steal documents she had deleted, and release them to the public.

Apparently, the Russians listened. According to the indictments special counsel Robert Mueller revealed on Friday, that same day in 2016, Russian hackers attempted, for the first time, to hack into “email accounts at a domain hosted by a third-party provider and used by Clinton’s personal office.” They also “targeted seventy-six email addresses at the domain for the Clinton campaign.” To be clear, Russia’s campaign to interfere in the election was ongoing by July 2016, what Trump’s request seems to have done was focus their efforts on Clinton’s emails.

There are a number of plausible explanations for what happened here. Perhaps the Russians heard Trump’s call and heeded it. Perhaps Trump’s invitation was accompanied by a private plea — maybe Paul Manafort or Roger Stone passed along the idea to Russian contacts. Maybe it’s just an unhappy coincidence for the Trump campaign.

Today, in Helsinki, the president of the United States is holding a friendly meeting with the Russian leader who sabotaged an American election on his behalf, and who has been rewarded by seeing American foreign policy pivot in a pro-Russian direction.

If that’s not bad enough to provoke a serious response from the American political system, what is?

What we know about the Trump campaign, the Trump White House, and Russia

We know, at this point, that Russia orchestrated a massive theft of information from the Democratic Party and the Hillary Clinton campaign, and used that information to help Donald Trump win the election.

We know that Trump publicly asked Russia to do exactly what they did — to hack Clinton’s emails — and we know that Trump repeatedly praised Vladimir Putin, at considerable political cost, in the aftermath. We know that Trump associates, like Roger Stone, appeared to have advance warning of the release of the hacked emails.

We know that the willingness to cooperate with the Russians wasn’t an idiosyncratic musing of Trump’s, but suffused the top ranks of his campaign: Trump’s inner circle — including Manafort, Jared Kushner, and Donald Trump Jr. — eagerly took a meeting with Russian operatives promising dirt on Clinton. And we know Trump himself dictated the statement lying about the purpose of the Trump Tower meeting.

We know, from Trump’s own testimony, that he fired the director of the FBI to end his investigation into Russia’s role in the 2016 election. We know that Trump has wanted to fire both his attorney general and his deputy attorney general because he feels they’ve failed to protect him from this investigation. Tellingly, the Trump administration has moved from arguing that the president did not obstruct justice to arguing that, by definition, the president cannot obstruct justice.

We know in that in 2008, Donald Trump Jr. said of the Trump organization, “Russians make up a pretty disproportionate cross-section of a lot of our assets.” We know that in 2014, Eric Trump added, “We don’t rely on American banks. We have all the funding we need out of Russia.” We know that, from 2003 to 2017, “buyers connected to Russia or former Soviet republics made 86 all-cash sales — totaling nearly $109 million — at 10 Trump-branded properties in South Florida and New York City.”

We know that Paul Manafort, Trump’s campaign manager, had ties to the Kremlin and was deeply in debt to Oleg Deripaska, a Russian oligarch closely connected to Putin. We know Manafort was in communication with Deripaska’s team during the election, and that he asked, of his powerful position in Trump’s campaign, “How do we use [it] to get whole?”

We know that Russia’s efforts to help Trump went far beyond hacked emails — they included social media campaigns to inflame racial divisions on his behalf, armies of bots meant to elevate news stories helping him and hurting Clinton, and even efforts to compromise state voting machines.

We know that the Trump campaign interfered in the Republican National Committee’s drafting of its platform to soften the language on Russia and Ukraine. We know that Kushner sought a secret communications channel with Russians so the US government couldn’t hear their negotiations. We know that Trump has personally fought both his administration and his party to stop sanctions punishing Russia for electoral interference.

We know that there is no single issue that has bedeviled the Trump administration as long or as much as Trump’s connections to Russia. We know that, since the election, Trump has bucked both his party and decades of American foreign policy to try to protect Russia from sanctions, pull American support back from both NATO and the EU, and forge a closer personal relationship with Putin. We know Trump insisted on the Helsinki meeting with Putin over the objections of his staff and despite the absence of any clear agenda.

Imagine it’s 2012 and someone described to you everything we would know in 2018. Would this sound like a hazy, unclear state of affairs? Or would it sound like we actually knew more than enough — indeed, a terrifying amount?

The big picture on Trump and Russia

In New York magazine, Jonathan Chait published an interesting, if speculative, vision of a worst-case scenario: that Trump is, and has been for decades, a compromised Russian asset. The circumstantial evidence Chait amasses for this theory is chilling in its quantity, even if it remains far from proving the theory.

But Chait’s piece, like much in this debate, reflects the view that we are still largely in the dark about the true nature of the Trump organization’s relationship with Russia. We’re not. At this point, we know an enormous amount about the connections between Trump and Russia, about Russia’s role in the 2016 election, about the Trump organizations efforts to hide their contacts with Russians, about Trump’s efforts to impede the investigation into the subject, and about Trump’s treatment of Russia and Putin and NATO since getting elected.

“Every single time we’ve heard of that the Russians reached out to offer something — dirt on Hillary Clinton, access to another trove of e-mails, secret meetings, back channels — the common theme of every single individual in Trump’s orbit was, ‘Yes. Help us out,’” says Susan Hennessey, a former National Security Agency official and the executive editor of Lawfare. “That is the really astounding picture that has emerged.”

It is not entirely clear to me how different the various stories that could yet be told really are. In the most innocent version of the tale, the cooperation between the Trump campaign and Russia came because Trump telegraphed what he wanted to Russia, and Russia telegraphed what they wanted to Trump, and both sides did the other’s bidding.

How different is that, really, then an email between Putin and Trump agreeing to cooperate during the election and then forge a closer partnership once Trump took the White House? What, precisely, rides on the question of whether the communication was private or public?

Similarly, the case that Trump sought to obstruct the investigation has passed an almost comical point of definitiveness. He fired the FBI director investigating him, publicly demanded his attorney general do more to protect him, and lied to the public about key events. So what are we still waiting to learn? What is it that we don’t yet know that would mean more than what we’ve already found out?

What we don’t know is what to do

Learning the truth is important for its own sake, and there is much left to find out. But the obsessive focus on what we still don’t know reflects a hope, among Trump’s opponents, that Mueller will find something, reveal something, bait Trump into doing something, that will trigger consequences of some kind. The truth is there is nothing so automatic in the system, and no reason to believe further revelations would call forth that kind of response.

The big issue, at this point, isn’t what we don’t know; it’s that we have no idea what to do with what we do know.

The Trump campaign coordinated — privately or publicly or both — with Russia to steal documents from the Democrats and win the election. In the aftermath, as president, Trump has pursued a pro-Putin foreign policy and fought efforts to investigate or punish Russia’s crimes in 2016. What is the remedy for that? And even if there was one, who has the incentive and credibility to impose it?

Congressional Republicans know their future is tied to Trump’s survival. Anything that weakens his administration weakens their 2018 reelection prospects, their ability to fill judgeships, their ability to pass tax cuts. Their political lives depend on Trump’s political strength.

While it’s an interesting counterfactual to imagine the way the GOP would be reacting if all of these revelations were attached to President Bernie Sanders’s 2016 campaign, it is fantasy to imagine they will do anything save protect Trump to the best of their ability.

Congressional Democrats don’t have the power to do anything right now, and such, are focused on taking back Congress in 2018. But even if they win the election, their priority will turn to retaking the presidency in 2020, and that’s going to mean focusing on health care and Social Security, not Russia and the 2016 campaign.

For that precise reason, the 2018 and 2020 elections cannot and will not act as a clear vehicle for accountability on Trump and Russia. From Supreme Court justices to tax policy to Obamacare’s future to environmental regulations, there is too much at stake in any given election, and there are too few choices available to voters, for them to answer a problem as complex and unusual as this one.

As for the rest of the legal system, keep in mind: There’s nothing necessarily illegal about Donald Trump publicly asking Russia to hack the Clinton campaign’s emails, just as there’s nothing illegal about him pursuing a stunningly pro-Putin foreign policy in the aftermath of receiving Russia’s aid. The actual hacking of the emails was illegal, but who’s going to hold Russia accountable for it? The Trump administration that asked for, and benefitted from, their help?

The ridiculousness of both the question and the answer makes the point. Mueller’s indictments were announced just before Trump and Putin’s summit, and it first led to talk of whether Trump might cancel the meeting (of course he didn’t), and then speculation over whether and how he might confront Putin over Russia’s actions.

But everyone knows that Trump’s actual response to Russia’s intervention on his behalf has been gratitude and solicitousness — what other response is there to a world power doing exactly what you asked of them in a time of political need?

Subscribe to the Ezra Klein Show wherever you get your podcasts!

Vox Sentences: Michael makes landfall
How Netflix’s new mafia documentary failed
Why are brands so bad at apologizing?
Senate Republicans have a new stimulus bill. Here’s what’s in it.
Trump’s agreements in Central America could dismantle the asylum system as we know it
Rep. Elijah Cummings’s funeral featured a powerful indictment of Trump’s character