Trump and the fragile belonging of American Jews 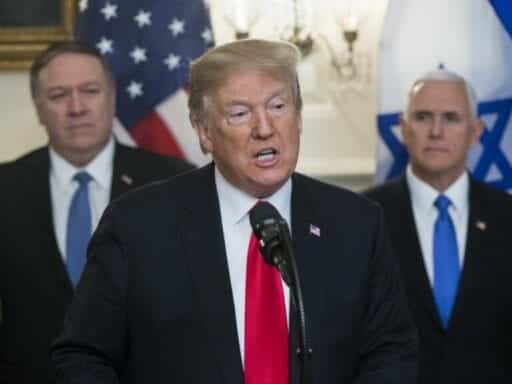 The president’s spree of anti-Semitic comments reveals why Jews can’t feel truly safe in his America.

It’s hard to know what’s most offensive in President Donald Trump’s outbursts about Jews this week.

It could be his Tuesday night allegation that the eight out of 10 American Jews who support Democrats are guilty of a “total lack of knowledge or great disloyalty [to Israel],” engaging in the anti-Semitic canard of Jewish dual loyalty that Trump himself condemned when Rep. Ilhan Omar (D-MN) used it.

It could be his Wednesday morning tweetstorm, in which he quotes Wayne Allen Root, a conspiracy theorist and self-described “Jew turned evangelical Christian,” to declare that Israeli Jews love Trump “like he’s the King of Israel. They love him like he is the second coming of God.” In Trump’s eyes, he’s the Jesus that Jews don’t believe in — but really should.

Tying the two outbursts together is Trump’s underlying motivation, which might be the most offensive part all.

Trump wants American Jews should forget about his long history of anti-Semitic comments and his declaration that there were “very fine people” among the Charlottesville Nazis and vote for him because of his blank check support for Israel. He wants us to forget about the upsurge in white nationalism and anti-Semitic hate crimes that seems to have been a product of his political rise, including three synagogue shootings in the past year alone, because he gets along well with Prime Minister Benjamin Netanyahu. He wants us to ignore our political values, vast policy and principled differences with the Trump agenda, because Israel.

Trump wants American Jews to think of him as their friend, all of the evidence staring our community in the face that he isn’t. If the past day’s outbursts have any upside, it’s that they reveal just how false this charade is — and show that American Jews are yet another minority group threatened by the Trump presidency.

The contingent whiteness of American Jews

There’s a perennial debate among American Jews about whether we qualify as “white.” It’s an odd conversation — it often ignores the existence of non-white Jews entirely — but it gets at an important question: To what extent can American Jews trust America’s white Christian majority to protect their community and civil rights?

Historically, the answer is “not very much.” During the Civil War, General Ulysses S. Grant blamed Jews for a black market in cotton and, in punishment, attempted to expel them from parts of Tennessee, Mississippi, and Kentucky. Henry Ford blamed the Jews for World War I, and white supremacist terrorists targeted eight synagogues for bombings between 1957-58. Social clubs and universities banned and restricted Jewish access; Harvard and Yale had tight quotas on Jewish admissions as late as the 1960s.

Anti-Semitism clearly survived in the United States even after the full horror of the Holocaust was revealed to the world. Yet things have undeniably gotten better, to the point where some have argued that the situation of Jews in America has been fundamentally transformed. Mainstream American politics and culture has moved so far in a philo-Semitic direction, on this view, that Jews need not worry about the specter of state-sponsored hatred.

“The Trump presidency seethes with hostility toward many different minority and subordinated groups. But Jews have been elevated to a special protected category,” David Frum, who is Jewish, wrote in the Atlantic on July 24. “Gone are the days when Trump tweeted out a Star of David atop stacks of money.”

Less than a month later, Trump labeled Jews “disloyal” and declared himself our stand-in messiah.

Frum’s argument centers on the idea that Jews have transcended our past status as a marginalized group — that today, even right-wing Christians are so friendly to Israel, the Jewish community, and its interests that we can conclude Trump’s bigotry toward other groups won’t come for the Jews as well:

The comedian Chris Rock performed a classic comedy sketch about how bigotry always accelerates toward the Jews at the end. “That train,” he quipped, “is never late!” But what if that train is late? What if it’s been canceled altogether, at least insofar as it departs from Trump Station? What if the old community of interest between American Jews and other minorities is dissolving, leaving only the weaker tie of a community of values?

Jews of European descent enjoy many of the privileges of whiteness — especially when they aren’t visibly Jewish. But we also are only contingently accepted as equal participants in white American society. A political movement that threatens all minority groups invariably makes anti-Semitic forces more powerful, as the most virulent anti-Semitism lurks among the broader community of bigots.

We Jews are most certainly part of the “Other” with a capital-o, a tiny percentage of the country seen as different and distinct from the majority culture. We are targeted for attacks by the growing white supremacist movement and smeared by the president when we don’t do what he wants.

Such a situation is not durable security or true acceptance. It’s an iron fist hidden behind a blue-and-white velvet glove.

Live results for the Washington primary elections
2 primary races to watch in Indiana
The Senate impasse over the massive $1.8 trillion coronavirus stimulus, explained
10 great Stephen King stories that are ripe for film adaptation
The 5 best TV shows of August 2019
It Chapter Two is fun and scary, but lacks what made Chapter One great