Trump and the Navy are on a collision course 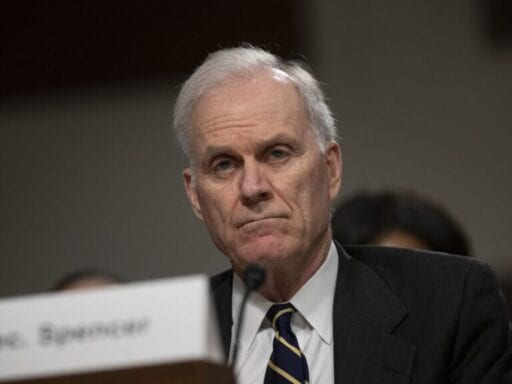 Trump’s meddling in a war-crimes case may lead top Navy officials to resign.

HALIFAX, Nova Scotia — A fight between President Donald Trump and the Navy has spilled out into the open over a controversial case involving the Navy SEALs — and it may lead to a top Pentagon official resigning in protest.

Chief Petty Officer Edward Gallagher was accused of murdering an ISIS captive, shooting civilians, and threatening those in his charge who gave their superiors information on him during his time in Iraq. He was acquitted by military jury of those charges in July, but the Navy still demoted him after he was found guilty of posing in a photo next to the dead body of the teenage detainee.

Trump has taken a keen interest in Gallagher’s case. Last week, he signed an order directing to restore the commando’s previous rank. Then on Thursday, the president tweeted that the Navy should stop a review into whether or not to boot Gallagher out of the elite unit, which would lead to the his loss of the coveted gold Trident pin.

The Navy will NOT be taking away Warfighter and Navy Seal Eddie Gallagher’s Trident Pin. This case was handled very badly from the beginning. Get back to business!

But the Navy is defying Trump’s pressure. Multiple reports indicate the military service may still punish Gallagher and taking his pin away. Navy Secretary Richard Spencer, the military department’s highest-ranking civilian official, and Rear Adm. Collin Green, the unit’s commander, have both reportedly threatened to resign should Trump intervene in the case.

That on its own would encompass one the greatest military rebukes of Trump during his presidency. But Spencer denied the reports during a speaking engagement at the Halifax International Security Forum in Canada. “I’m still here,” he said during a panel on Arctic security. “I did not threaten to resign.”

During the session, Spencer’s Twitter account released his full denial statement (which means someone on his staff surely sent the message).

“Contrary to popular belief, I am still here. I did not threaten to resign. We are here to talk about external threats and Eddie Gallagher is not one of them.” pic.twitter.com/ysa5A6pYkd

It’s still clear that Trump and Spencer are at odds. Just one day earlier, Spencer told Reuters he believed the Gallagher review should proceed unimpeded. “I believe the process matters for good order and discipline,” he said.

Most military experts are appalled by what Trump has forced his top military and defense officials to do with respect to Gallagher.

“The president has placed military leadership in a difficult position,” Bishop Garrison, who served two tours in Iraq in the US Army, told me, adding that the military justice system and the chain of command are in place for a reason, and are to be followed.

“If there are egregious violations of the trust we have bestowed to that system, then it is appropriate for Congress to step in in its oversight authority and for the executive to? work with them in a transparent manner,” continued Garrison, who is now at the Human Rights First advocacy group. “This situation has not been that in the least.”

The Trump-Navy standoff could lead to a drawn out conflict between the president and the military over the coming days and weeks, coming at a time when Trump can ill-afford more problems with his own administration amid impeachment considerations. Yet Trump believes American troops accused of war crimes deserve the benefit of the doubt for fighting in the heat of battle, saying in May, “We teach them how to be great fighters, and then when they fight sometimes they get really treated very unfairly.”

Ironically, that stance has now placed him in a battle with his own military.

Who died in Game of Thrones’ Battle of Winterfell, and who survived: the full list
BoJack Horseman season 5 is a bold, bracing look at a culture that shirks responsibility
Why North and South Dakota are suffering the worst Covid-19 epidemics in the US
Why cashier’s checks are part of so many online scams
Live results for the Ohio 12th special election
What makes HBO’s Sharp Objects so good is hiding in plain sight