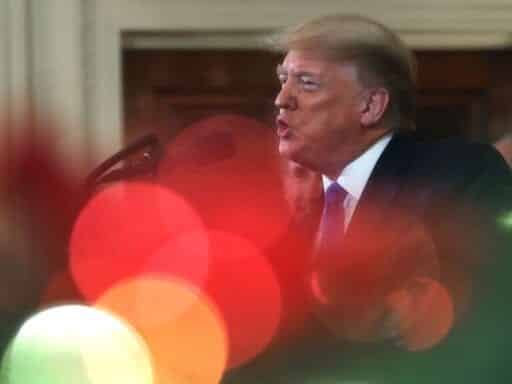 And the posts are very bad.

As the House of Representatives prepares to take an initial vote on articles of impeachment on Thursday, President Donald Trump had a morning of “executive time” that was out of control even by his lofty standards.

As this is written around 2:30 pm East Coast time, Trump — who has very little on his schedule for the rest of the day — has posted a whopping 108 tweets or retweets on Thursday alone, surpassing his single-day posting record of 105 which was just set last Sunday.

Despite the fact that he’s spent most of his day online, Trump claimed during a White House event late in the morning that he was having a “very busy day.”

Trump, who has already posted 90 tweets or retweets today, just said at a White House event that he’s having a “very busy day.” pic.twitter.com/K7I3ZCLxkW

To begin with the most egregious example, the day after 16-year-old climate activist Greta Thunberg was named Time magazine’s youngest-ever Person of the Year, Trump mocked her, tweeting that she “must work on her Anger Management problem, then go to a good old fashioned movie with a friend! Chill Greta, Chill!”

So ridiculous. Greta must work on her Anger Management problem, then go to a good old fashioned movie with a friend! Chill Greta, Chill! https://t.co/M8ZtS8okzE

It’s not the first time Trump has attacked Thunberg on Twitter, and Greta had some fun with Trump’s latest jab. But the 73-year-old president of the United States attacking a teenager with Asperger’s is a very bad look — especially considering that just last week, Trump and his defenders pretended to be outraged when Stanford University law professor Pamela Karlan merely mentioned Barron Trump’s name during an impeachment hearing.

Trump’s Greta tweet was undoubtedly the most unsavory he posted during his Twitter binge on Thursday, but it was far from the only bad one. Fourteen minutes after the Greta tweet, Trump — who is currently pretending he has good-faith concerns about corruption in Ukraine and elsewhere — shared an advertisement posted by the Trump Organization, a business he still owns and profits from, promoting his Mar-a-Lago resort in Florida.

“I will be there in two weeks, The Southern White House!” Trump said, conflating properties he profits from with the publicly funded residence in which he’s supposed to do the people’s business.

I will be there in two weeks, The Southern White House! https://t.co/2djJrzAEfZ

To cite a few other examples that illustrate where the president’s head is at, he retweeted a post from Rudy Giuliani characterizing Democrats following the Constitution’s impeachment process as an “attempted coup”; characterized FBI agents as “dirty cops”; lauded Fox News’s ratings, adding, “It’s great to have a wonderful subject, President Trump”; and, in an apparent attempt to make it look like he’s doing something constructive, touted a Chinese trade deal that he’s been hyping without results for more than a year.

These tweets are over 1 year apart. Trump has been hyping a China deal for more than a year. pic.twitter.com/wqIxDld3lA

These tweets, coming as they do less than 48 hours after Trump delivered one of his ugliest rally speeches in recent memory in Hershey, Pennsylvania, suggest he’s not coping particularly well with the strain of impeachment. But they also speak to the stakes of the 2020 election, in the likely event that Trump isn’t ultimately removed from office by the GOP-controlled Senate.

Regardless of whether you think Trump’s attempts to leverage Ukrainian diplomacy into political favors for his campaign rises to the level of a high crime or misdemeanor that warrants his removal from office, Trump’s attacks on a teenage climate activist and promotion of his own business say something about the character of the man who currently holds the highest office in the land. And one thing above all else is clear — Trump isn’t changing.