Trump attempts to clean up after Putin meeting: “I have GREAT confidence in MY intelligence people” 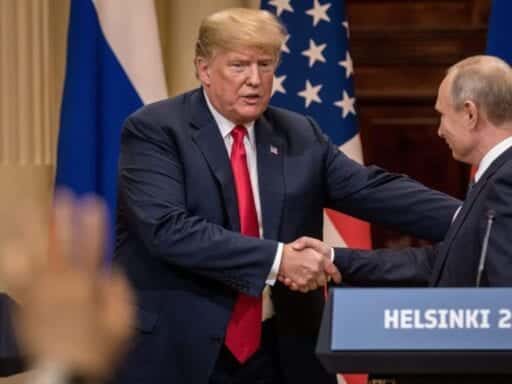 But the president omitted the part where he said the Russian leader was “extremely strong and powerful” in his denials about 2016 meddling.

The whiplash left behind from President Donald Trump’s extraordinary press conference with Russian President Vladimir Putin hasn’t quite abated, but Trump has already begun to respond on Twitter.

“As I said today and many times before, ‘I have GREAT confidence in MY intelligence people,’” he wrote. “However, I also recognize that in order to build a brighter future, we cannot exclusively focus on the past — as the world’s two largest nuclear powers, we must get along.”

As I said today and many times before, “I have GREAT confidence in MY intelligence people.” However, I also recognize that in order to build a brighter future, we cannot exclusively focus on the past – as the world’s two largest nuclear powers, we must get along! #HELSINKI2018

This is a very misleading version of what Trump actually said at the press conference in Helsinki on Monday. “I have great confidence in my intelligence people,” Trump did indeed say. “But,” he continued, “I will tell you that President Putin was extremely strong and powerful in his denial today.”

Trump was responding to a question from an Associated Press reporter, who asked whether Trump believed the assessment of his US intelligence community over the denials from Russia about interfering in the 2016 election. Trump made it clear in that statement — and many others — that he has much more faith in Putin than he does in his own law enforcement and intelligence agencies.

Nor are Russia’s attacks on American democracy in the past, as Trump seemed to suggest in his tweet. Director of National Intelligence Dan Coats — the nation’s top spy and one of Trump’s “intelligence people” — warned at an event Friday that “the warning lights are blinking red” when it comes to Russian and other hostile countries’ cyberattacks on US infrastructure. And Coats responded to Trump’s Helsinki press conference with his own forceful statement, reiterating the intelligence community’s assessment that Russia most definitely meddled in the 2016 election.

Trump’s elevation of Russia — at the expense of America’s allies, no less — has sparked outrage and condemnation from lawmakers and former US officials, among others.

Trump followed up this tweet with propaganda that showed pictures of him and Putin standing side by side, an alarming elevation of one of America’s adversaries. It was, in some respects, a continuation of a press conference in which Trump publicly and repeatedly deferred to Putin — which ultimately makes his professed faith in his “intelligence people” meaningless.

Opponents say Zimbabwe’s election was a sham. The ruling party is trying to silence them.
Exclusive: State Department officials warned Trump not to revoke protections for immigrants
Vox Sentences: A suicide bomber attacks an Afghan school
Why the death of democracy may be overhyped
Obama’s message to young people of color: “I want you to know that you matter”
Shel Silverstein’s extremely cozy houseboat is for sale