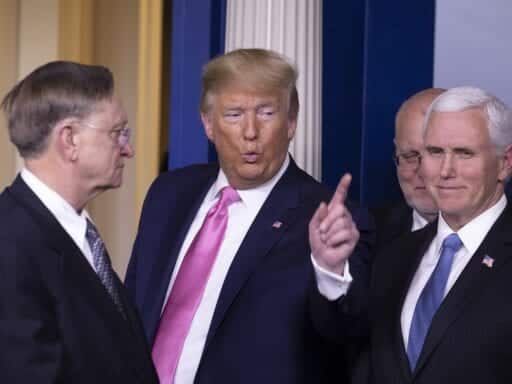 The president’s argument rests on a misunderstanding of how time works.

President Donald Trump tried to pin this week’s stock market slide in the face of a potential coronavirus outbreak on Democrats. But the case he made to do that was nonsensical — even by his standards.

During a news conference on Wednesday that was meant to quell fears, Trump explained away the Dow Jones Industrial Average’s nearly 2,000-point dip on Monday and Tuesday not first and foremost by acknowledging reality — which is that investors are spooked by fears we’re amid the early stages of a global pandemic — but by insisting that they’re spooked by the prospect of Bernie Sanders or Joe Biden becoming the next president.

“I think the financial markets are very upset when they look at the Democrat candidates standing on that stage, making fools out of themselves, and they say, ‘If we ever have a president like this,’” Trump said, referring to the most recent Democratic presidential debate held in South Carolina. “When they look at the statements made by the people standing behind those podiums, I think that has a huge effect.”

But there’s a problem: The Democratic debate in question took place on Tuesday night, after American markets closed for the day. By then, the Dow had already endured two days of significant losses — 1,032 points on Monday and another 879 points on Tuesday. So Trump’s explanation for the market slide rests on a fundamental misunderstanding of how time works.

If his claim about markets being spooked by the Democratic debate held water, you would’ve expected the Dow to plummet again on Wednesday. But it didn’t. It dropped just 122 points. There’s just no evidence that Democrats are at fault.

Trump’s explanation for the market slide may have been absurd, but the point was to reassure the American public that the broader coronavirus situation is under control and that there’s no reason for panic in the markets or elsewhere.

But as Trump spoke on Wednesday, the Washington Post broke news of the first coronavirus case in the United States that doesn’t seem to be linked to travel to affected regions of the world or with known contact with someone already infected with Covid-19, the disease coronavirus causes. As my colleague Kelsey Piper wrote, that development “suggests the coronavirus may now be spreading in the country, person-to-person — with this person just the first to be symptomatic, seek medical care, and test positive.”

Responding well to such a public health crisis would be a challenge for even the most competent presidential administration, but as Vox’s Matthew Yglesias wrote, the Trump administration is in a uniquely bad position to respond to this one. The global economy is clearly picking up on the threat.

So there’s good reason to believe that the markets may not fully rebound anytime soon. There’s not much Trump can do about that, but it’s a problem for him considering how much political capital he’s staked on the strength of the Dow.

The Washington Post reported that privately, “Trump has become furious about the stock market’s slide” and “believes extreme warnings from the Centers for Disease Control and Prevention have spooked investors.”

During his news conference on Wednesday, Trump praised the work of the CDC, but also said he agrees with conspiracy theories pushed by Rush Limbaugh and others who say the outbreak being weaponized against him.

“I agree with it,” Trump said, alluding to Limbaugh’s comments. “And I’d like it to stop.”

“I agree with it … and I’d like it to stop” — here’s Trump saying during his coronavirus news conference yesterday that he agrees with Rush Limbaugh’s conspiracy theory that the outbreak is being weaponized against him to hurt him politically pic.twitter.com/sQ75J6Nko6

Limbaugh, who was granted the Presidential Medal of Freedom by Trump during the State of the Union speech earlier this month, has also compared Covid-19 to the common cold. While there’s a lot we don’t yet know about Covid-19, including its exact morality rate, a recent paper from the medical journal JAMA pegged it at 2.3 percent.

Standing next to Trump, Dr. Anne Schuchat, the principal deputy director of the CDC, made sure to praise the “aggressive containment strategy” that Trump also touted, but also provided a more sober assessment of the overall situation than the president did.

“We do expect more cases,” she said. “The trajectory of what we’re looking at over the weeks and months ahead is very uncertain.”

The 12 Days of Christmas: the story behind the holiday’s most annoying carol
Manchin opposition weakens DC statehood chances
Pandemic learning “pods” don’t have to be just for the rich
The US needs a lot more hospital beds to prepare for a spike in coronavirus cases
This graphic explains why 2 degrees of global warming will be way worse than 1.5
Papadopoulos given 14-day sentence as part of the Mueller investigation