Trump blasted US allies within minutes of arriving at NATO summit 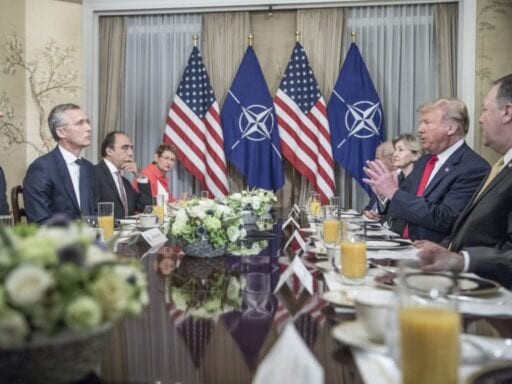 He even said Germany was “captive to Russia.”

The two-day NATO summit that began on Tuesday is off to a seriously rocky start, due to President Donald Trump.

The US president used his first event there, a bilateral breakfast with NATO Secretary General Jens Stoltenberg, to lecture the alliance about its own defense spending. Trump even proceeded to say that Germany is “captive” to Russia.

That’s a stunning way to begin proceedings, as events like this usually begin with niceties and general statements about “transatlantic unity.” Instead, the alliance’s most important member kicked things off by berating some of its closest allies.

And if this is how it all starts, it’s hard to fathom how it might all end.

“Many countries are not paying what they should,” Trump said publicly as he sat across from Stoltenberg. “And, frankly, many countries owe us a tremendous amount of money for many years back, where they’re delinquent, as far as I’m concerned, because the United States has had to pay for them.”

Trump continued, “This has gone on for decades,” adding, “but no other president brought it up like I bring it up.”

Trump has long blasted NATO on this point. On Tuesday, the day Trump flew to Brussels for the summit, the president tweeted: “NATO countries must pay MORE, the United States must pay LESS. Very Unfair!” Five days earlier at a rally in Montana, Trump had used even more forceful language. “They kill us,” he said, adding “we’re the schmucks paying for the whole thing.”

The president has a point, NATO experts tell me. Only the US and three other countries spend at least the expected 2 percent of GDP on their own defense — the amount all NATO countries agree to spend — although Stoltenberg says that number will soon climb to eight members.

Trump isn’t the first president to complain about other NATO countries’ military spending: Everyone from John F. Kennedy to Barack Obama criticized NATO allies over this. Where Trump crucially differs from other presidents is he believes many of America’s 28 NATO allies, as he says, “owe us a tremendous amount of money” because they heavily rely on the US.

But experts observe he’s wrong about how NATO spending works. “We are asking NATO allies to invest more in their OWN national defense budgets. There are no past dues. No one is delinquent. It’s not a country club,” Julie Smith, a European security expert who served as a deputy national security adviser to former Vice President Joe Biden, tweeted on Tuesday.

As expected, Trump berated Germany — Europe’s most prosperous country and the second-largest contributor of troops to NATO missions behind the US — for spending only 1 percent on defense.

But then he made a striking claim: “Germany, as far I’m concerned, is captive to Russia because it’s getting so much of its energy from Russia,” Trump said at the breakfast. “We have to talk about the billions and billions of dollars that’s being paid to the country we’re supposed to be protecting you against.”

Here’s the background: Germany approved and started building what’s known as the Nord Stream 2 pipeline this year, with plans to complete the construction by 2020. This will help Germany import tons of Russian gas to power the country’s homes, industries, and military.

What worries Trump, it seems, is that this Russia-to-Germany pipeline is being built by the Russian state-owned energy giant Gazprom. That could potentially give Moscow major influence over Berlin, especially since Germany imports about 47 percent of its natural gas from Russia. But Germany imports just 9 percent of all of its energy, which undercuts Trump’s claim that Germany will somehow be beholden to Moscow.

Still, Trump thinks this is a bad deal, to say the least.

Trump also noted that Germany’s former leader, Gerhard Schroeder, works in the Russian energy industry. Schroeder is a close friend of Vladimir Putin and even hails him as a “flawless democrat.” Trump will meet with Putin in Helsinki on July 16, just four days after the NATO summit ends.

German Chancellor Angela Merkel offered her own remarks upon her arrival.

“I experienced firsthand that a part of Germany was occupied by the Soviet Union,” she told reporters. “It is good that we can now make our own decisions.“

So let’s be clear about what happened: Trump used his first opportunity to bash one of America’s most important European and NATO allies, and showcase his disdain for the decades-old, US-led alliance. It’s a major break from the way the US conducts itself at these meetings, and it could portend an even greater rift within the alliance.

If this is a sign of how Trump will act over the next two days, buckle up.

Why Eastern European countries aren’t attacking Trump over NATO
I’ve read the plans to reopen the economy. They’re scary.
The best and worst of the biggest streaming services
Trump judge says his ruling attacking protesters’ First Amendment rights was wrong
In defense of reading the same book over and over again
The Vox Senate interview: Barbara Bollier is making the Kansas Senate race competitive for Democrats