Trump boasted that his polls are “through the roof.” Fox News quickly proved him wrong. 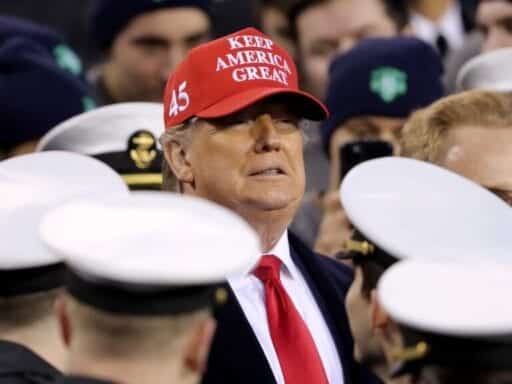 Share
Loading...
Trump stands with the Navy side of the field to start the second half of the game between the Army Black Knights and the Navy Midshipmen at Lincoln Financial Field on Saturday in Philadelphia, Pennsylvania. | Elsa/Getty Images

New polling conducted by the president’s favorite cable network contains almost nothing but bad news for him.

During a White House press event on Friday, President Donald Trump insisted, without evidence, that impeachment is backfiring on Democrats.

“The polls have gone through the roof — for Trump,” he said. “I could show you numbers … nobody has ever seen numbers like this before.”

It took less than 48 hours for the president’s favorite cable news channel to release a poll that strongly suggests he’s making stuff up.

As the above graphic indicates, those numbers haven’t significantly changed from late October. Other polls released in recent days by NPR/PBS/Marist and CBS also indicate that the country has been and continues to be close to evenly divided on impeachment. But one thing they do not show is the surge of support that Trump has been hyping as Democrats have moved toward impeaching him.

The Impeachment Scam is driving Republican Poll Numbers UP, UP, UP! Thank you Shifty.

Fox News’s latest impeachment poll is far from the first they’ve conducted that has looked bad for Trump. But the disconnect between the network’s polling and its spin was evidenced in the way Fox News framed its latest poll on its website, where the top-line takeaways were “Trump job approval ticks up, views on impeachment steady” — not the jarring finding that half of voters want him removed from office.

Even though they tried to spin the numbers in the most positive light for him, Trump responded to the Fox News poll by lashing out at the network in a tweet in which he tagged the wrong Twitter account and urged the network to “Get a new pollster!”

The @foxnewPolls, always inaccurate, are heavily weighted toward Dems. So ridiculous – same thing happened in 2016. They got it all wrong. Get a new pollster!

Trump’s tweet may have been in reference to another part of the latest Fox News poll showing that if the election was held today, Joe Biden would best him by a 48 percent to 41 percent margin.

But Trump’s suggestion that the Fox News polling shouldn’t be taken seriously because they were off in 2016 is a mistaken one. The network’s final 2016 poll found Hillary Clinton leading Trump by a four point spread (48 percent to 44 percent) that was quite close to Clinton’s ultimately margin of victory in the popular vote (48 percent to 46 percent).

Less than 10 minutes after posting that tweet, Trump posted another boasting of “Approval Rating in Republican Party = 95%” It was at least the twelfth time Trump cited that specific number on Twitter, without even once linking to a poll indicating he isn’t totally making it up.

The Covid-19 pandemic could be the last straw for high drug costs
Hawaii is banning sunscreens that kill coral reefs
Hawaii is facing a rare threat: a major hurricane
Why the death of democracy may be overhyped
Obama says that Americans are seeking “improvement” not “revolutionary” change
Elizabeth Warren’s first question at an Iowa event: Why release your DNA results?