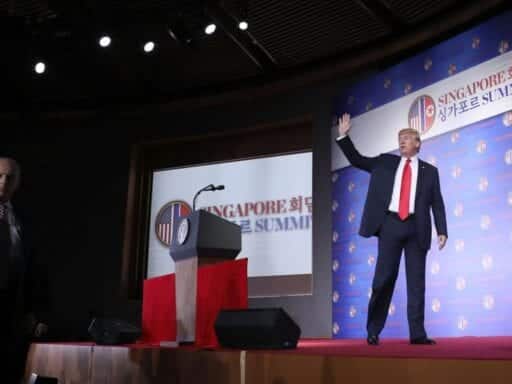 Amid reports North Korea isn’t going along with denuclearization, Trump wants everyone to thank him for not being at war.

Amid reports that North Korea is not winding down its nuclear arsenal as promised, President Donald Trump lashed out on Twitter on Tuesday morning. He declared that if it were not for him, the United States would be at war with North Korea.

There have been multiple reports in recent days indicating that North Korea is increasing production of fuel for nuclear weapons, improving infrastructure at one of its nuclear facilities, and figuring out ways to hide its weapons and production from the United States. The reports have landed less than a month after President Trump met with North Korean leader Kim Jong Un at a summit in Singapore, where Trump claimed to have secured denuclearization from North Korea.

If recent reports, which cite US intelligence agencies, of North Korea’s activities are correct, it appears that North Korea is trying to get as much as it can out of Trump — who has already offered major concessions, including canceling joint US-South Korean exercises on the Korean peninsula — while keeping its nuclear activities going.

On Tuesday morning Trump said in a tweet there were “many good conversations” with North Korea going on and bragged that it has been months since the country last launched rockets or tested nuclear missiles. “All of Asia is thrilled,” he wrote. “Only the Opposition Party, which includes the Fake News, is complaining,” he added. “If not for me, we would now be at War with North Korea!”

Many good conversations with North Korea-it is going well! In the meantime, no Rocket Launches or Nuclear Testing in 8 months. All of Asia is thrilled. Only the Opposition Party, which includes the Fake News, is complaining. If not for me, we would now be at War with North Korea!

Trump isn’t the only one in the administration in denial about what’s happening in North Korea. His national security adviser John Bolton in a Sunday appearance on CBS’s Face the Nation said the White House is “very well aware of North Korea’s patterns of behavior over decades of negotiating with the United States.” In the same interview, he asserted that the US would be able to “dismantle the overwhelming bulk” of North Korea’s programs within a year.

As Vox’s Alex Ward pointed out, North Korea experts reacted negatively to Bolton’s assertions. North Korea has not disclosed where its nuclear, chemical, and biological weapons are, and it’s unlikely that it’s willing to dismantle its nuclear program.

Not long ago, we didn’t worry Trump couldn’t save us from war with North Korea. We were afraid he would cause it

On June 13, the day after his Singapore trip, Trump declared in a tweet there was no longer a nuclear threat from North Korea.

Just landed – a long trip, but everybody can now feel much safer than the day I took office. There is no longer a Nuclear Threat from North Korea. Meeting with Kim Jong Un was an interesting and very positive experience. North Korea has great potential for the future!

In months prior to the summit, his tweets and comments had ignited fears that nuclear war with North Korea might actually become a reality.

Trump and Kim exchanged a string of insults and threats. Trump insulted Kim’s weight and height, and Kim went after Trump’s age, infamously referring to him as “mentally deranged” and a “dotard.” Trump in August of last year threatened to meet North Korea with “fire and fury like the world has never seen” if Pyongyang made more threats.

Tensions have eased in recent weeks, but the threat of imminent war was always one that Trump helped create.

The Quarry is a slow-burn Western about guilt, racism, and salvation on the US-Mexico border
75 books from university presses that will help you understand the world
Civil rights organizations want advertisers to dump Facebook
Trump lawyers keep accusing Democrats of manipulating evidence. But they’re doing that themselves.
It’s Kirsten Dunst vs. a pyramid scheme in her capitalism-skewering new Showtime series
The shutdown’s effect on the US economy, explained