Trump called for unity against political violence. He didn’t mention what he said last week. 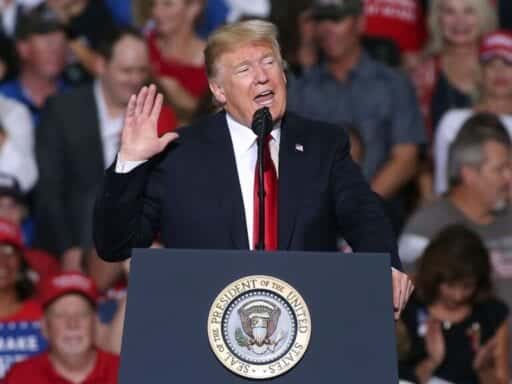 During a short, staid address to the nation on the state of a string of attempted bombings of political figures, President Trump called on Americans to “unify and send a clear message that acts of political violence have no place in the United States.”

His words were remarkably presidential. He definitively condemned the violence and clearly described the federal investigation underway, promising any resources necessary.

Despite his polished remarks, Trump missed an opportunity. We don’t know who is behind the bombs addressed to Democrats. We don’t know if it’s someone motivated by Trump or someone or something else entirely. Trump shouldn’t take responsibility for violence that could have nothing to do with him. But he could have used the moment to own up to his own rhetoric, to apologize for the times he’s taken his attacks on his political rivals too far at rallies or in the heat of the moment on Twitter.

Trump could have attempted to actually make the unfolding crisis a moment of unity by seeking redemption. But he didn’t. And the final days before the midterms will be a test of whether the moment has changed him much at all.

Trump backed political violence just last week, and the week before that, and before that

Trump has stomped on democratic norms since the very beginning of his campaign and even last week, when he explicitly endorsed a candidate because he committed an act of political violence.

“Any guy that can do a body slam … he’s my guy,” Trump said to cheers and laughter at a campaign rally for Rep. Greg Gianforte.

Gianforte “body-slammed” a Guardian reporter last year, breaking his glasses, after the reporter asked him a question about health care — in the middle of the Obamacare repeal fight on Capitol Hill.

In the weeks before endorsing that incident, Trump targeted other liberals with veiled threats or language meant to vilify his adversaries.

Two weeks ago, he went on Fox & Friends and attacked Attorney General Eric Holder for calling Democrats to “kick” Republicans in the midterms. “He better be careful what he’s wishing for,” Trump told Fox News. “That’s a disgusting statement for him to make.”

The week before that, he accused liberal billionaire George Soros of paying women to pretend to be the victims of sexual assault and protest Brett Kavanaugh’s nomination to the Supreme Court, tweeting: “The very rude elevator screamers are paid professionals only looking to make Senators look bad. Don’t fall for it! Also, look at all of the professionally made identical signs. Paid for by Soros and others. These are not signs made in the basement from love! #Troublemakers.”

He’s also got into it with Rep. Maxine Waters when she encouraged liberals to confront Republicans in public places. “Congresswoman Maxine Waters, an extraordinarily low IQ person, has become, together with Nancy Pelosi, the Face of the Democrat Party. She has just called for harm to supporters, of which there are many, of the Make America Great Again movement. Be careful what you wish for Max!” Waters said she started to receive death threats after his remark.

And of course, throughout his campaign and even now, when Trump mentions Hillary Clinton at a rally, his crowd of supporters starts to chant, “Lock her up!” A few weeks ago, he accused her of collusion with Russia, which set off the chant.

As much as it would have been a good moment, in theory, for Trump to take a look at his words, he can’t really change.

He ran for the presidency on a platform of division, drumming up fear among white voters about immigrants, global trade, and changing cultural norms. He vilified his opponent. He promised to be the defender of the white working class. Now he’s trying to save his Republican majority in Congress by stoking the same fears and vilifying opponents again. He needs conflict.

He doesn’t have a much better option. Republicans discovered that their policies are very unpopular — from their push to repeal Obamacare to their tax cut bill. So instead, they’ve pivoted to claiming credit for policies they don’t actually support (like protecting preexisting conditions) and drumming up, again, fear of immigrants (focusing obsessively on a caravan of Central American refugees) — all for the purpose of trying to vilify the opposition.

Trump called for the country to come together today. But he knows division is what keeps him in power.

Stavros Agorakis contributed to this report.

These 5 people are still waiting for their stimulus checks
How regular people are using Amazon affiliate links to make money
House to vote Wednesday on immigration bill as GOP leaders try to find consensus
Instagram’s co-founders just quit. That could be bad news for Facebook.
The other hospital workers on the front lines of the pandemic
Trump hates being laughed at. This video seemingly shows world leaders doing just that.

The future of the office has been put on hold