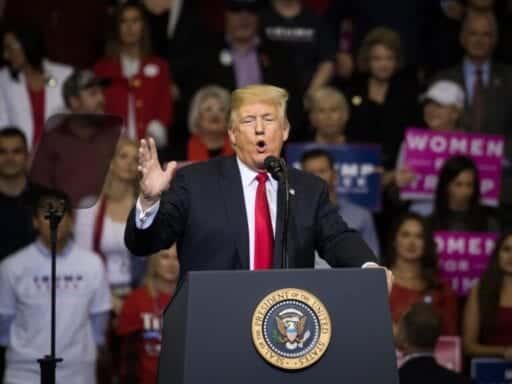 After a string of attempted bombings against Democrats, Trump cast blame away from himself for divisive political rhetoric.

President Donald Trump sounded more somber than usual as he kicked off a Mosinee, Wisconsin, rally on Wednesday. It didn’t take him long to turn a call for unity in the face of political violence into a jab at the media and an allusion to Democratic “mobs.”

The news of the day was dominated by attempts to send pipe bombs to high-profile Democrats — including former Presidents Barack Obama and Bill Clinton, Hillary Clinton, former Attorney General Eric Holder, former CIA Director John Brennan, and billionaire and philanthropist George Soros. All were sent packages containing “potentially destructive devices.” (The package addressed to Brennan was sent to CNN, and the package addressed to Holder ended up at the Florida office of Debbie Wasserman Schultz, the former Democratic National Committee chair.)

After two years of encouraging his crowds to “lock her up” (and once tweeting a video in which he body-slammed a man with a CNN logo superimposed on his face to the ground), Trump was the one calling for an end to political violence.

His prescription was calling for unity — and then blaming the media.

“Any acts or threats of political violence are an attack on our democracy, itself,” Trump said. “No nation can succeed that tolerates violence or the threat of violence as a method of political intimidation, coercion, or control.”

Right after asking the country to come together, Trump sounded off on the media for what he characterized as sowing divisiveness.

“As part of a larger national effort to bridge our divides and bring people together, the media also has a responsibility to set a civil tone and to stop the endless hostility and constant negative and oftentimes false attacks and stories,” Trump said. “Have to do it. They’ve got to stop.”

Trump also appeared to foist some of the blame for the heightened tension on Democrats. Though he did not mention the party by name (or note that many of those targeted were Democrats or had served in Democratic administrations), the president alluded to “mobs,” something he has clearly tied to the Democratic Party in his pre-midterms messaging of “jobs not mobs.”

“We should not mob people in public spaces or destroy public property,” Trump said at the rally. “No one should carelessly compare political opponents to historical villains, which is done often.” (Earlier this week, Trump’s Council of Economic Advisers released a report on socialism that compared Elizabeth Warren and Bernie Sanders to Mao Zedong and Joseph Stalin.) “It’s done all the time,” Trump said. “Got to stop.”

The president added the way to settle disagreements peacefully was at the ballot box, nodding to the November 6 midterms that are just a few weeks away.

Then he made sure to point out that he was keeping his own behavior in check — a joke that ended the solemn message with a sort of wink to the audience.

“By the way, do you see how nice I’m behaving tonight?” Trump said. “Have you ever seen this? We’ve all been behaving very well. We want to keep it that way.”

The president was in the position of asking for less discord and an end to political violence on Tuesday night, which is somewhat of an unusual position for him.

During the 2016 campaign, Trump once wondered aloud if there was something “Second Amendment people” could do to stop Hillary Clinton from being able to pick judges — seemingly alluding to violence against the Democratic nominee. And Trump has made light of attacks on reporters, something he did at a rally just last week.

Trump has stomped on democratic norms since the very beginning of his campaign and even last week, when he explicitly endorsed a candidate because he committed an act of political violence.

“Any guy that can do a body slam … he’s my guy,” Trump said to cheers and laughter at a campaign rally for Rep. Greg Gianforte.

Gianforte “body-slammed” a Guardian reporter last year, breaking his glasses, after the reporter asked him a question about health care — in the middle of the Obamacare repeal fight on Capitol Hill.

Trump revels in picking fights with the media and the Democratic Party — and he managed to get in a few jabs even while calling for unity on Wednesday night in Wisconsin.

The absurd 24 hours unleashed by one bad White House answer on Russia
Alaska Republican Sen. Dan Sullivan wins a second term
This filmmaker spent months interviewing neo-Nazis and jihadists. Here’s what she learned.
The Trump administration will start sending most immigrant families arrested at the border back to M...
Andrew Yang will be the only candidate of color on stage in the Democratic debate
Federal watchdog says “substantial likelihood of wrongdoing” at US broadcasting agency