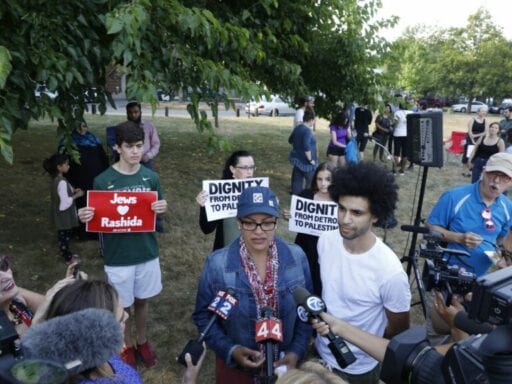 Donald Trump criticized Tlaib’s refusal to visit Israel after officials said she could come if she didn’t protest, as Nancy Pelosi worked to move on.

President Trump criticized Rep. Rashida Tlaib’s (D-MI) decision to decline Israel’s offer to allow her to visit her grandmother in the West Bank under strict political conditions on Friday evening, calling it “a complete setup.” He also said that Tlaib’s grandmother was “the only real winner” of the situation since she “doesn’t have to see Tlaib.”

Rep. Tlaib wrote a letter to Israeli officials desperately wanting to visit her grandmother. Permission was quickly granted, whereupon Tlaib obnoxiously turned the approval down, a complete setup. The only real winner here is Tlaib’s grandmother. She doesn’t have to see her now!

House Speaker Nancy Pelosi seemed inclined to dismiss the president’s role in creating controversy over the congresswoman’s planned trip, however, telling the Associated Press on Friday that she sees Trump and Israeli Prime Minister Benjamin Netanyahu’s recent cooperation in barring visits from US lawmakers critical of Israel as something that will not have a lasting impact.

“We have a deep relationship and long-standing relationship with Israel that can withstand Donald Trump and Benjamin Netanyahu,” Pelosi said. “We cannot let their weaknesses stand in the way of our ongoing relationship.”

Trump’s and Pelosi’s latest comments reflect their sharply divergent outlook on the US-Israeli relationship: Trump sees Israel as a means for advancing domestic political goals — an opportunity to divide Democrats and demonize lawmakers who criticize Israel harshly for its treatment of the Palestinians. Pelosi, by contrast, wants to depoliticize the US-Israeli relationship, and wants to return it to a policy realm of bipartisan consensus.

The controversy began when Netanyahu blocked Tlaib and Ilhan Omar (D-MN) from entering Israel on Thursday, citing their support of the Boycott, Divestment, and Sanctions movement (a campaign that in part calls for a boycott of Israeli goods and for companies to stop doing business in the country) against the country.

The unprecedented move to bar US lawmakers from visiting Israel on political grounds came immediately after Trump tweeted, “It would show great weakness if Israel allowed Rep. Omar and Rep. Tlaib to visit Israel,” claiming that they “hate Israel & all Jewish people.” Trump also reportedly lobbied Israel’s government to block the visit privately as well.

It would show great weakness if Israel allowed Rep. Omar and Rep.Tlaib to visit. They hate Israel & all Jewish people, & there is nothing that can be said or done to change their minds. Minnesota and Michigan will have a hard time putting them back in office. They are a disgrace!

While both lawmakers have been critical of Israel, and Omar in particular has criticized the influence of the pro-Israel lobby on her congressional colleagues, neither has said, as the president maintains, that they hate Israel. And while some have accused Omar of employing anti-Semitic tropes, neither congresswoman has shown any sign of “hating all Jewish people.”

Tlaib and Omar had been scheduled to go on a private trip organized by a Palestinian-led nonprofit, traveling across Israel and the West Bank, where Tlaib has family. As Vox’s Jen Kirby explained, after having her entry barred by the Israeli government, Tlaib then decided to try to find another way to visit her family:

[A]fter the announcement, Tlaib appealed to Israeli Interior Minister Aryeh Deri, asking that she be permitted to visit her relatives in the West Bank — specifically her grandmother, who is in her 90s. “This could be my last opportunity to see her,” Tlaib wrote. “I will respect any restrictions and not promote boycotts against Israel during my visit.”

After the request, Israel reversed its decision for just Tlaib, and granted her permission to visit after she agreed in writing not to promote the boycotts, according to the New York Times. In a statement, the Israeli interior minister’s office said that it hoped “she would keep her commitment and that the visit would truly be solely for humanitarian purposes.”

But on Friday, Tlaib rejected Israel’s offer, saying that she would not visit under the conditions set forth. “I can’t allow the State of Israel to take away that light by humiliating me & use my love for my sity to bow down to their oppressive & racist policies,“ Tlaib wrote on Twitter Friday.

“I have decided that visiting my grandmother under these oppressive conditions stands against everything I believe in–fighting against racism, oppression & injustice,” she added.

Silencing me & treating me like a criminal is not what she wants for me. It would kill a piece of me. I have decided that visiting my grandmother under these oppressive conditions stands against everything I believe in–fighting against racism, oppression & injustice. https://t.co/z5t5j3qk4H

Despite Tlaib writing she’d only offered to agree to Israeli restrictions on her speech in order to see her grandmother and that she’d decided to sacrifice a chance to visit her loved ones in order to take a stand, Trump responded to Tlaib’s change of heart by suggesting the entire thing was a political stunt.

“Israel was very respectful & nice to Rep. Rashida Tlaib, allowing her permission to visit her ‘grandmother.’ As soon as she was granted permission, she grandstanded & loudly proclaimed she would not visit Israel,” Trump tweeted Friday.

Pelosi, meanwhile, worked to reframe the controversy as being more than yet another attack by Trump on a member of the Squad (a group of progressive congresswomen that includes Omar and Tlaib), but as a minor hiccup in a strong US-Israeli alliance that would endure beyond the partisan politicking of the day.

“We have a strong relationship with Israel as well as a deep love and respect for the people of Israel,” Pelosi said. “And, again, this is not going to undermine that, try as President Trump will to do that.”

For her part, Tlaib’s grandmother, Muftiyah Tlaib, told the Washington Post that she is “so proud” of her granddaughter.

“What I can say about Rashida and Omar is that they are starting to knock on the door and say something is wrong,” Muftiyah Tlaib said. “Hopefully in the future they will change something in the opinions of ordinary American people.”

Nevertheless, she also expressed sadness about being unable to spend time with her granddaughter, whom she last saw in 2007.

“She’s in a big position, and she cannot visit her grandmother,” she told the Post. “So what good is the position?”

The great rebuild
Eric Greitens' nonprofit was 'criminal enterprise,' but committee must end: Mo. lawma...
More than a quarter of all birds have disappeared from North America since 1970
Supreme Court punts on two cases regarding partisan election districts
Before Alexandria Ocasio-Cortez, here are 5 of the biggest U.S. political upsets
President Trump to King Felipe VI: We love Spain

Keep an eye on breakthrough Covid-19 cases. But don’t freak out.

Tennessee has one of the lowest vax rates. Republicans are working to keep it that way.