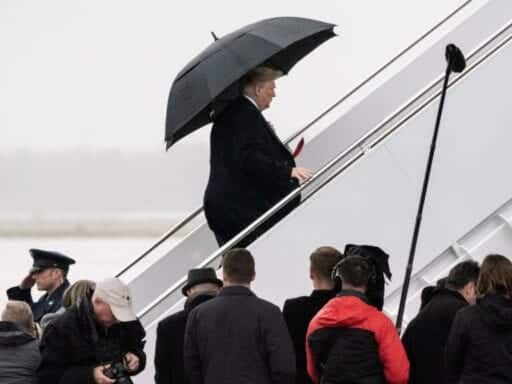 He made the comments ahead of a speech to the Future Farmers of America.

President Donald Trump called the Saturday attack on a Pittsburgh synagogue “an anti-Semitic act,” his strongest comments yet in the shooting’s aftermath.

Trump is in Indianapolis to speak with the Future Farmers of America, but started his speech with strong comments on the multiple deaths and at least six injuries during a baby-naming ceremony.

“This wicked act of mass murder is pure evil, hard to believe, and frankly, something that is unimaginable. Our nation and the world are shocked and stunned by the grief,” Trump said. “This was an anti-Semitic act. You wouldn’t think this would be possible in this day and age.”

He added, “anti-Semitism and the widespread persecution of Jews represents one of the ugliest and darkest features of human history.”

His remarks come just hours after he said the carnage at the synagogue could’ve been reduced if it had tighter security. He also said the gunman should get the death penalty.

Read Trump’s full remarks on the shooting at during his Saturday speech below:

[A]s you know, earlier today, there was a horrific shooting targeting and killing Jewish Americans at the Tree of Life synagogue in Pittsburgh, Pennsylvania. The shooter is in custody.

And federal authorities have been dispatched to support state and local police and conduct a full and thorough federal investigation. This wicked act of mass murder is pure evil, hard to believe, and frankly, something that is unimaginable. Our nation and the world are shocked and stunned by the grief.

This was an anti-Semitic act. You wouldn’t think this would be possible in this day and age. But we just don’t seem to learn from the past. Our minds cannot comprehend the cruel hate and the twisted malice that could cause a person to unleash such terrible violence during a baby-naming ceremony. This was a baby-naming ceremony, at a sacred house of worship on the holy day of Sabbath.

Antisemitism and the widespread persecution of Jews represents one of the ugliest and darkest features of human history. The vile, hate-filled poison of antisemitism must be condemned and confronted everywhere and anywhere it appears. There must be no tolerance for antisemitism in America or for any form of religious or racial hatred or prejudice.

You know that. You know that very well. You know that very well. You’re outstanding people. You were brought up incredibly by outstanding parents in most cases. And I just want to thank you for your understanding because today, with one unified voice, we condemn the historic evil of antisemitism and every other form of evil. And unfortunately, evil comes in many forms. And we come together as one American people. I have just spoken, go ahead. We should, we should.

I have just spoken with the mayor of Pittsburgh, Bill Peduto, terrific guy, and with the governor of Pennsylvania, who have I been dealing with quite a bit lately on the hurricanes, and other things, Tom Wolf — two terrific people — to assure the full and complete resources of my administration in the investigation of this.

They really do. They do so much for us. And they really are unsung heroes. They don’t get the credit they deserve. But I have always given them the credit. These are incredible patriots, incredible people.

We mourn for the unthinkable loss of life that took place today. And we pledge in their name to fight for a future of justice, safety, tolerance, morality, dignity, and love. We must all rise above the hate, move past our divisions, and embrace our common destiny as Americans.

And it doesn’t mean that we can’t fight hard and be strong and say what’s on our mind, but we have to always remember those — we have to remember the elements of love and dignity and respect and so many others. As we hold Pennsylvania and the great people of Pennsylvania close in our hearts and prayers, I am glad to be here today in the wonderful state of Indiana.

Yes, the UK media’s coverage of Meghan Markle really is racist
7 key races and ballot initiatives to watch in this November’s elections
Donald Trump will be acquitted. American politics will be convicted.
5 common questions about social distancing, answered
Halloween costumes have a size problem
The chaotic delay of the Ohio primary, explained