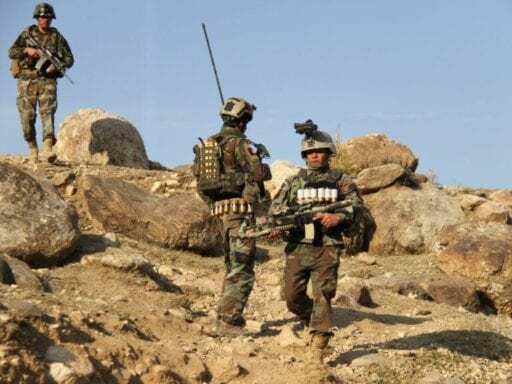 Peace between the US and the Taliban could have been announced as early as next week. Now it is off the table.

President Donald Trump halted peace talks with the Taliban Saturday in a series of tweets in which he denounced the group’s continued attacks during the peace process. The president also claimed he’d arranged a secret meeting with Taliban leaders at Camp David — a meeting he said he decided to cancel following a Taliban attack that killed a US soldier and at least 11 other people in Kabul last week.

Unbeknownst to almost everyone, the major Taliban leaders and, separately, the President of Afghanistan, were going to secretly meet with me at Camp David on Sunday. They were coming to the United States tonight. Unfortunately, in order to build false leverage, they admitted to..

….an attack in Kabul that killed one of our great great soldiers, and 11 other people. I immediately cancelled the meeting and called off peace negotiations. What kind of people would kill so many in order to seemingly strengthen their bargaining position? They didn’t, they….

….only made it worse! If they cannot agree to a ceasefire during these very important peace talks, and would even kill 12 innocent people, then they probably don’t have the power to negotiate a meaningful agreement anyway. How many more decades are they willing to fight?

The tweets seemed to signal at least a temporary end to a would-be deal between the US and its main adversary in the ongoing conflict in Afghanistan. That deal would have seen the US withdrawing troops from the country it has occupied for nearly two decades in exchange for the Taliban cutting ties with extremist Islamist groups and playing an active role in ensuring terror groups could not operate within Afghanistan.

And many, including Afghan President Ashraf Ghani, have been openly skeptical about the proposed deal, arguing it omitted a crucial commitment: The Taliban would not have been required to stop attacks on Afghans or the Afghan government’s military. The Taliban doesn’t recognize the Afghan government, and the group’s insistence on only committing to peace with the US was major problem during negotiations, according to CNN. As Vox’s Zeeshan Aleem reported, critics closer to home had similar issues with the peace process, concerned US withdrawal would create a dangerous security vacuum:

Afghanistan’s government has not been involved in negotiating the agreement, and the deal as currently drafted does not grant the Afghan people any protections from Taliban attacks. Critics, including military officials and congressional Republicans, have argued that in having failed to extract a commitment of protection from the Taliban, US negotiators are leaving innocent people to die.

Ghani’s administration had similar security concerns, particularly given a recent spate to violent terrorist attacks against civilians largely blamed on the Taliban. Due to these concerns, Ghani postponed a planned summit with Trump next week, according to Afghan officials.

What comes next is not entirely clear. While the Afghan government hasn’t responded directly to Trump’s tweet, a spokesperson for Ghani said, “We have always said that a real peace is possible only when the Taliban stop killing Afghans, accept a ceasefire and start direct negotiations with the Afghan government,” adding that the government “appreciates the sincere efforts of its allies” to bring peace in the country.

A spokesperson for the Taliban called Trump’s decision “a political issue,” and told the Associated Press the future of the deal is still up in the air: “We are waiting for our leaders and will update you.”

On Sunday, Secretary of State Mike Pompeo told ABC’s George Stephanopoulos a troop withdrawal could still happen, but that “the president hasn’t yet made a decision on that.” Pompeo also told CNN’s Jake Tapper that if the Taliban can make a “significant commitment” towards restoring the Trump administration’s trust in the group, peace talks could resume. However, the secretary tempered that by saying, “If the conditions aren’t appropriate on the ground and proper to protect America, we’re not going to enter into any deal.”

Deadly attacks have plagued Afghanistan throughout the peace talks

In calling off the peace deal, Trump indicated a deadly attack near the US embassy in Kabul that left an American soldier dead was the tipping point to stop negotiations. “What kind of people would kill so many in order to seemingly strengthen their bargaining position?” he tweeted.

Throughout the summer, the Taliban has carried out multiple attacks that have killed dozens of people. In early July, it killed around 40 people, including children, in the capitol city. Clashes between Taliban and Afghan government fighters have killed hundreds more.

One is that the insurgents hope to put pressure on the US by eroding its will to stay in the country. The other is that there remain factions inside the Taliban that don’t want to negotiate peace and therefore continue to exact violence in the capital and elsewhere. As of now, it’s unclear which theory best explains the timing of this attack.

It’s not certain whether the talks at Camp David were actually set to happen, as many others who are usually in the know — including US officials, foreign diplomats, Afghan officials, and Taliban representatives — had given no indication that the administration had set up the secret meeting with the militant group, NBC reported.

However, it’s clear the cancellation of all peace negotiations came as a surprise to those involved, and to US allies. A Taliban official told NBC Trump’s tweet “not only shocked us, it made us realize the people we were talking with were not sincere in peace talks.”

Trump’s tweet came hours after some of his top officials, including Secretary of Defense Mark Esper, were out promoting the agreement. And Norway, which also has troops in Afghanistan through the NATO-led International Security Assistance Force, had also begun preparations for the anticipated negotiations between the Afghan government and the Taliban.

In the short term, the cancelled talks mean that little is likely to change on the ground. The fundamentalist group will continue to ravage Afghan communities and US troops will largely remain. Whether there is a path forward for negotiated peace in the country — which US forces entered 18 years ago — remains to be seen.

The problem with Trump’s “reality show” pictures, according to Obama’s photographer
What poll watchers actually do, and Trump’s troubling rhetoric about them, explained
In Such a Fun Age, everyone wants the black girl’s attention, but she just wants a real job
Amazon will spend $5 million to prop up Seattle businesses harmed by coronavirus precautions
It’s official: women have been nominated for a record number of House seats
Why some conservatives are rethinking libertarian economics