Trump cancels his state visit to Denmark over Greenland 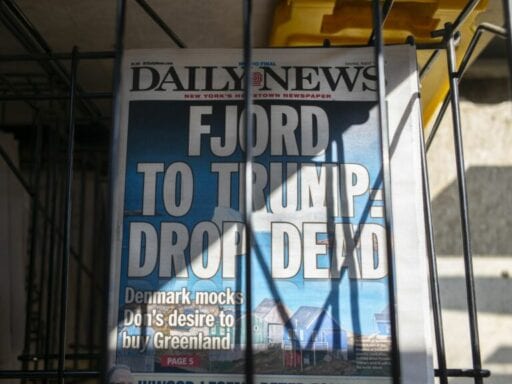 Share
Loading...
The Daily News plays off a classic headline to report on Trump’s attempts to buy Greenland. Now the US president is snubbing Denmark. | Robert Nickelsberg/Getty Images

So we all kind of thought the whole Trump-buying-Greenland thing was mostly a joke.

Denmark’s Prime Minister Mette Frederiksen appeared to think so, too, calling the idea of buying the autonomous Danish territory “absurd.” Many Greenlanders seemed to make light of it, too. Even President Trump made the rare joke at his own expense, tweeting a picture of a golden Trump Tower looming above tiny cabins, saying, “I promise not to do this to Greenland!”

But of course that wasn’t the end of it — and now it’s turned into a somewhat serious diplomatic spat. On Tuesday evening, Trump tweeted that “based on Prime Minister Mette Frederiksen’s comments, that she would have no interest in discussing the purchase of Greeland, I will be postponing our meeting schedule in two weeks for another time …”

“The Prime Minister was able to save a great deal of expense and effort for both the United States and Denmark by being so direct,” he added in a follow-up tweet. “I thank her for that and look forward to rescheduling sometime in the future!”

….The Prime Minister was able to save a great deal of expense and effort for both the United States and Denmark by being so direct. I thank her for that and look forward to rescheduling sometime in the future!

Yes, the president of the United States just started a squabble with a NATO ally over a half-serious plan to buy the territory of Greenland, which was never for sale for in the first place.

Frederiksen gave a press conference Wednesday morning to respond to Trump’s cancellation, saying she received the news with “regret and surprise.” She reiterated the close ties between the US and Denmark, and said she hoped they could continue dialogue in the future, particularly on issues in the Arctic. Although Greenland still isn’t for sale.

Other Danish officials met Trump’s announcement with consternation and a little bit of anger. Former Prime Minister Helle Thorning-Schmidt questioned if this was actually the joke. “Deeply insulting to the people of Greenland and Denmark,” she wrote.

Another former prime minister, Anders Fogh Rasmussen, wrote that Trump’s decision was “a setback for our countries’ diplomatic relations, but it may be for the best.”

“The Arctic’s security & environmental challenges are too important to be considered alongside hopeless discussions like the sale of Greenland,” he said.

Denmark’s Queen Margrethe II had invited Trump for a state visit on September 2 and 3, which the White House announced in late July. Few details about the visit had been released, besides Trump engaging in bilateral talks and meetings with business leaders.

But Trump would have been only the fourth sitting US president to make a state visit to Denmark, so it was a fairly big deal. (It’s also kind of weird Trump canceled because, politics aside, he loves himself a state visit.)

Frederiksen told reporters during her press conference Wednesday that preparations had been well underway and the country had already put in a lot of effort. The US ambassador to Denmark had even tweeted that Denmark “was ready for POTUS,” just hours before Trump called the whole thing off.

This Greenland thing shouldn’t have been a thing, but now it is a thing

The Wall Street Journal reported last week that Trump was interested in Greenland because of its strategic location and natural resources. Trump said as much on Sunday, saying that “strategically for the United States, it would be nice.”

Modern-day interest in Greenland, however, is more about drilling and mining.

As Tim Boersma and Kevin Foley put it in their 2014 Brookings Institution report, “as the Arctic ice continues to melt due to global warming, Greenland’s mineral and energy resources — including iron ore, lead, zinc, diamonds, gold, rare earth elements, uranium and oil — are becoming more accessible.”

If Greenland were to become part of the sovereign territory of the United States, then the US government could dispense rights to these mineral and energy resources as it sees fit, which might be lucrative for various interested parties.

Trump also called it “essentially a real-estate deal” — though it’s not quite that. While the US has bought countries before (including what is now the US Virgin Islands from Denmark), and the Truman administration offered to buy Greenland in the 1940s, Denmark could not trade away the territory without Greenland’s consent.

And now a seemingly half-serious proposal bouncing around the White House has threatened a rift with one of the US’s longest-running allies.

Denmark is a strong NATO partner and has fought alongside the US (and lost soldiers) in Afghanistan and Iraq. It’s of strategic importance because of its proximity to Russia and its location in the Arctic. And while Denmark doesn’t want to sell Greenland, it has leased out territory for the US to host a military base there.

This is also the latest in a series of fights with what are supposed to be America’s closest allies. This summer alone, Trump has tried to make the UK ambassador to the US persona non grata over leaked cables, insulting the outgoing prime minister in the process; sent his hostage negotiator to Sweden over a relatively minor trial for a well-connected celebrity; and is now snubbing Denmark over a fantastical idea to buy an Arctic island that isn’t for sale. Trump will also attend the G7 in France this weekend, and if last year is any indication, something will likely go awry.

Trump’s mistreatment of America’s allies has been a constant theme among critics of his foreign policy, one that’s coming up more and more on the campaign trail, where 2020 Democrats are promising to undo the damage to America’s alliances Trump has caused and prioritize NATO and other US alliances.

It’s one thing if there are legitimate disputes; there’s room to defend, for example, Trump’s push to get NATO allies to spend more for defense. It’s another thing when America’s partnerships are weakened at the expense of Trump’s very weird whims.

The UK Parliament is voting on Brexit amendments Tuesday. What does it mean?
After Trump supporters surround a Biden bus in Texas, the FBI opens an investigation
Community was one of the most inventive shows in TV history. Don’t let it be forgotten.
Why the MyPillow guy was at the White House, explained as best we can
Minneapolis officer Derek Chauvin charged with murder in the death of George Floyd
The moment Trump officially left Washington