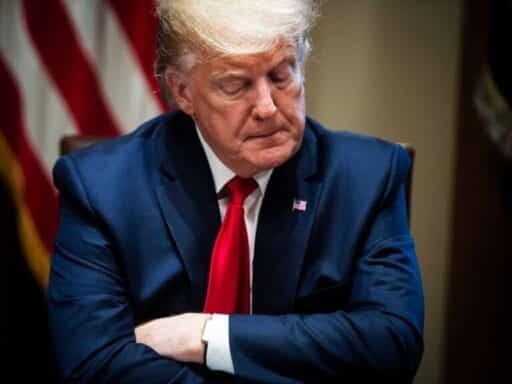 Trump claims support for impeachment is “down into the 20’s in some Polls.” But these polls do not seem to exist.

And it isn’t clear Trump is referencing numbers from any actual polls, like the data he cited Monday that he said shows support is “down into the 20’s in some Polls.”

Support for Impeachment is dropping like a rock, down into the 20’s in some Polls. Dems should now get down to work and finally approve USMCA, and much more!

Morning Consult’s findings are slightly down from early October, near the beginning of the impeachment inquiry, when its pollsters found 88 percent of Democrats supported impeachment. But they remain in line with polls taken ahead of the first public impeachment hearings, like an October 8 Quinnipiac University poll that found 85 percent of Democrats wanted to see Trump impeached and removed from the White House.

Similarly, polling among Republicans has not made any major shifts.

Beyond slight declines in Democratic and Republican support, there has also been a decrease in support for impeachment among independent voters — something that the president has celebrated on Twitter, retweeting allies like Rep. Mark Meadows who have pointed out this trend.

Meadows cited a November poll from Emerson College that found 34 percent of independents in support of impeachment, down 14 percentage points from the level of support registered in the college’s October poll.

What none of these polls show is support for impeachment in the 20s, as Trump has claimed. It is possible that figure stems from a report from conservative firm Rasmussen — an organization’s whose polls have not always proved overly accurate, but that usually favor the president. A mid-November survey from that company found 18 percent of voters believe Trump will be impeached “before serving his full term in office.” This is not the number who support impeachment, but simply the number who think impeachment (and presumably removal from office) will happen.

It is also possible the president is simply misrepresenting available data, something he has done on Twitter before, most often when sharing his approval rating.

While Trump’s reading of the polls does not appear to be accurate, it is fair to say that support is down slightly overall. In the weeks following House Speaker Nancy Pelosi’s announcement of an impeachment inquiry into Donald Trump, support for impeachment was on the rise across all political affiliations, suggesting Democrats were wise to begin the inquiry.

Recent trends are not necessarily cause for alarm among Democratic leaders, particularly as it remains to be seen whether recent downturns last or are fleeting. Support for impeachment has fluctuated before, and it is important to note available polling was conducted toward the beginning and middle of public impeachment inquiry hearings, not following them.

During those hearings, witnesses gave sworn testimony painting a picture of a campaign led by the president that subverted US foreign policy in Ukraine into a mechanism for domestic political gain, and many of the witnesses who arguably had a greater degree of insight into Trump’s role in the scandal, like US Ambassador to the EU Gordon Sondland, testified toward the end.

House Democrats certainly hope that those hearings will increase public support for impeachment, giving them a clear mandate to continue the process, and they still may, meaning recent polls — real or imaginary — are not really something for the president to celebrate.

A beginner’s guide to the debate over nuclear power and climate change
Mr. Feldman goes to Washington
Who’s who in the impeachment hearings
“Are you a doctor?” The unchecked racism faced by physicians of color.
Virginia’s state legislature elections are Democrats’ first big enthusiasm test before 2020
Midterms 2018: New York’s Alexandria Ocasio-Cortez slated to become youngest woman in Congress