Trump claims he has 100 photos of Comey and Mueller “kissing.” We tried to find some. 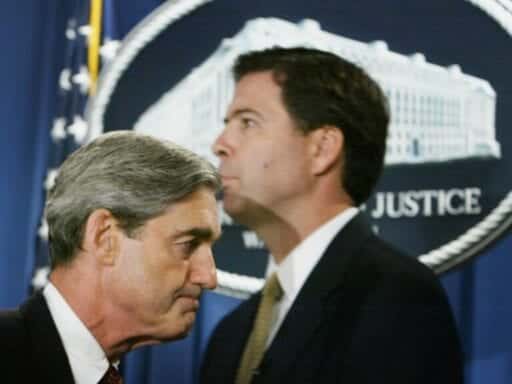 But in a lengthy and wide-ranging interview with the conservative news outlet The Daily Caller, the president listed a brand-new grievance.

“I could give you 100 pictures of him and Comey hugging and kissing each other,” Trump said in the interview, the full transcript of which was released on Wednesday. “You know, he’s Comey’s best friend.”

One hundred photos? That’s a lot of photos to have of two former FBI directors. Mueller and Comey do have a well-documented professional history together — and the president has complained about their friendship before. Vox decided to do a little digging through the wires to see if there was any photographic evidence to back up Trump’s allegation.

Long story short, we couldn’t find any — but we did find several incriminating photos of the two in the same general space, or looking at each other at press conferences.

Trump and his allies have cited Mueller and Comey’s past work together and perceived professional regard as evidence that the special counsel’s investigation is biased against the president and that Mueller can’t be impartial during the investigation, as it was the fallout from Comey’s firing that prompted the appointment of a special counsel.

But Trump’s 100 photos claim is, of course, just another attempt to undermine and muddy the special counsel’s investigation. Or maybe it’s possible Trump just got confused.

Singapore’s Covid-19 case fatality rate is remarkably low. Why?
7 key races and ballot initiatives to watch in this November’s elections
We’re failing in the opioid crisis. A new study shows a more serious approach would save lives.
Scott Pruitt resigns as EPA administrator
The Mueller indictments reveal the timing of the DNC leak was intentional
Mitt Romney is now just like every other Republican: he’s with Trump for the tax cuts