Trump claims he wants to lower drug prices. He’ll have to convince his own party to do it. 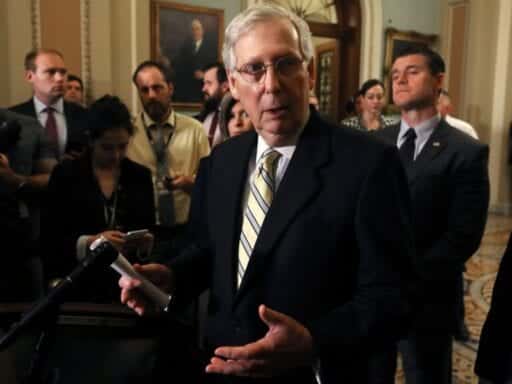 GOP reluctance around increasing regulation could stymie any bills on this issue.

House Democrats’ prescription drugs bill may have just been introduced, but Senate Republicans are already over it — even as President Donald Trump keeps promising voters he wants to get something done.

“Socialist price controls will do a lot of left-wing damage to the healthcare system. And of course we’re not going to be calling up a bill like that,” Senate Majority Leader Mitch McConnell said in an interview with Politico. Trump, meanwhile, argued that Congress should “help” lower America’s drug prices, which are some of the highest in the developed world, and gave a shout-out to both Pelosi’s proposal and another bill from Sens. Chuck Grassley (R-IA) and Ron Wyden (D-OR).

Because of my Administration, drug prices are down for the first time in almost 50 years — but the American people need Congress to help. I like Sen. Grassley’s drug pricing bill very much, and it’s great to see Speaker Pelosi’s bill today. Let’s get it done in a bipartisan way!

This difference in reactions highlights a fault line between the president and many members of his own party on this issue. While Senate Republicans have long been skeptical of increasing government regulation on drug prices, Trump has suggested he’s much more supportive of it, raising the subject as part of his 2016 presidential campaign platform, and reviving it during the 2018 midterm cycle as well.

House Democrats, however, are effectively calling his bluff with their new proposal: They want to enable the secretary of Health and Human Services to directly negotiate on as many as 250 drugs a year, for people covered by Medicare as well as private insurance plans. This bill, they argue, is an attempt to tackle the problem, while the administration stands by and Senate Republicans stonewall.

Democrats’ proposal offers the latest test of whether the Trump administration will act to bring down drug prices, an effort it’s stumbled on up until this point. Whether Trump can convince Senate Republicans to act on either the House bill, or other options introduced in the Senate, could be a sign of how committed he is to pushing something through.

Senate Republicans aren’t expected to cave easily on this subject — and they remain a central obstacle to getting things done.

“I caution the idea that [Democrats] can work just with the White House, not because of unreliability, but just because the Senate cares a lot about this,” Brendan Buck, a partner at Blue Engine Media, who had advised former House Speaker Paul Ryan, previously told Vox.

The GOP’s sustained opposition on the matter was made especially clear earlier this year when Senate Republicans pushed back on a bill from one of their own.

Sens. Chuck Grassley (R-IA) and Ron Wyden (D-OR), for example, have a bipartisan prescription drug legislation that would cap out-of-pocket costs for those covered by Medicare Part D and curb annual price hikes to ensure they are no more than the rate of inflation. Grassley’s bill is much less ambitious than House Democrats’ proposal, and even though it has also gotten a shoutout from Trump, Senate Republicans remain wary of it: When it passed out of the Finance Committee, nine Republicans of 15 voted against it.

Trump will need to offer full-throated support for legislation on drug prices if he’s interested in changing this dynamic. While bringing down prescription drug prices is an issue that has broad bipartisan support from voters, Republicans have been pretty set in their positions on it.

According to a 2018 poll from Kaiser Family Foundation, 63 percent of voters think there is not enough regulation on drug prices, including 72 percent of Democrats and 53 percent of Republicans. Senate Republicans, though, have long been cautious about increasing government oversight in the process — and positive sentiment around regulation isn’t necessarily going to sway them.

A tenet of the Grassley-Wyden bill, which would limit a drug’s annual price hikes to the rate of inflation or lower, is among those that Republicans pushed back against despite passing out of committee. “It’s my view that we should not use this sledgehammer of a universal price control, imported from Medicaid, to deal with that relatively narrow problem and to disrupt a program that’s working very well,” Sen. Patrick Toomey (R-PA) said during a committee vote, Kaiser Health News reports.

Pelosi’s first priority is pushing this bill through the House

Senate approval aside, Pelosi is first set on advancing this bill through the House. If she’s able to do this, it enables the speaker to argue that Democrats have lived up to one of their 2018 chief campaign promises. (True, it won’t have come to fruition, but it’ll be a marker to show that they tried.)

Before she’s able to, however, she’ll have to win over some members of her own party. Although House progressives lauded several aspects of the current version of the bill — negotiation for drug prices would be directly handled by HHS instead of any kind of arbiter, for example — members of the Congressional Progressive Caucus still have some concerns, a congressional aide tells Vox.

For one, the 250-drug number isn’t a mandatory target; instead, the proposal sets the floor at negotiating on a 25-drug minimum, and progressives worry this could significantly limit the number of drugs that get covered. For another, the proposal is less clear on how it would prevent companies from selling new drugs at exorbitant list prices in the first place. (The proposal relies on international reference pricing as a barometer for price negotiations, so a new drug could potentially have less data to work with on this front.)

These are questions that will be worked through as part of House Democrats’ upcoming hearings and markups on this legislation, the Democratic aide said, noting that there’s openness to changing how many drugs are supposed to have price negotiations annually. Additionally, any companies that bring new drugs to market without an international reference price would automatically be forced to lower the drug’s initial price by 15 percent. On top of that, the aide said, the negotiation price would be subject to even further reductions based on the HHS secretary’s evaluation.

Navigating the dissent in Democratic caucus will be vital to the proposal’s advancement in the House. The Senate, meanwhile, doesn’t seem particularly keen on moving anything either way.

A 2017 speech speaks to Brett Kavanaugh’s views on Roe v. Wade
Trump’s trade war is hurting the global economy
Nikki Haley delivers remarks on leaving the Human Rights Council
How to bake bread
US officials say their pressure on Iran is working — and that’s why tensions are getting worse
Trump’s misleading tweet about changing your vote, briefly explained