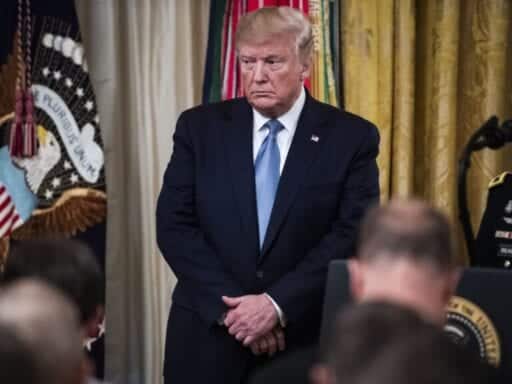 President Donald Trump seems to think that House Democrats’ move to push forward with an impeachment inquiry is actually good news for him — and he’s attempting to use polls to make that case.

This week, Trump posted tweets touting unnamed polls that he says show Democrats “will lose many seats in 2020” and another alluding to Thursday’s House vote formalizing the impeachment process and vowing “[t]he public is watching and seeing for themselves how unfair this process is … we will take back the House!”

He also claimed impeachment will “backfire”:

“It does appear it has to do with Nancy Pelosi retaining her Speakership in the next Congress. She would like that so she’s going to put it to a vote because that’s what her political left really wants.” @SteveDoocy @foxandfriends A disgraceful use of Impeachment. Will backfire!

In reality, however, polling indicates that the impeachment inquiry is broadly supported in the battleground states that are key both to Trump’s reelection hopes and the balance of power in Congress.

New York Times/Siena College polling released last week indicates that a majority of voters in Arizona, Michigan, North Carolina, Pennsylvania, and Wisconsin support an impeachment inquiry, with a plurality of Florida voters supporting it as well. Trump won all six of those states in 2016.

A majority of voters in 5 battleground states support support the impeachment inquiry (and a plurality in Florida does too) pic.twitter.com/I7OSNXmpzn

That same poll indicates that majorities in each of those states currently oppose Trump’s removal from office. But as the Nixon Watergate hearings taught us, public hearings laying out the evidence that Trump abused his office during his dealings with the new Ukrainian government could change that in a hurry, and those hearings are likely to begin as soon as later this month.

Also concerning for Trump is a new Washington Post/ABC poll that shows his approval rating among Republicans sliding to a record low of 74 percent — down eight points from September and 13 points from July. Overall, the poll pegs Trump’s approval rating at 38 percent, with nearly half of Americans (48 percent) strongly disapproving of his job performance (Trump’s overall disapproval rate is 58 percent).

The Post/ABC poll is consistent with other recent surveys indicating that while impeachment remains a very divisive issue on which Americans are nearly evenly split, those who disapprove of Trump’s performance (58 percent, according to the Post/ABC) are increasingly united in their desire that he be impeached and removed from office (49 percent, compared to 47 percent who do not support his impeachment and removal). In other words, America is polarized not just between those who support Trump and those who don’t, but between a minority that supports Trump and a near-majority who is so opposed to him that they want him removed from office.

October was a rough month for Trump’s polling overall. Perhaps most notably, a Fox News survey conducted between October 6 and 8 found a majority of voters (51 percent) support his impeachment and removal from office — a significant jump from the last time Fox News polled the question in July, when only 42 percent of respondents supported removing Trump.

Trump, as he is in the habit of doing, responded by bashing Fox News’ pollster and touting seemingly fake polls indicating he’s much more popular than he seems to be.

95% Approval Rating in the Republican Party. Thank you!

But even pro-GOP pollsters that Trump has repeatedly boosted show his approval slipping as the Ukraine scandal has escalated throughout the fall. On Friday, Rasmussen’s daily tracking poll showed Trump’s approval rating at 45 percent — down from 53 percent as recently as September 24.

Trump’s polling has slid as he’s struggled to develop a coherent response to the Ukraine strategy. He continues to insist he did nothing wrong in his efforts to leverage American aid into investigations of political benefit to him, but people aren’t buying it — the Post/ABC poll found that 55 percent think he did something wrong, compared to 35 percent who disagree.

Trump also continues to cite a “transcript” of his now-infamous July call with Ukrainian President Volodymyr Zelensky as evidence of his innocence — “READ THE TRANSCRIPT!” he tweeted on Thursday — but an NSC aide who was on the call testified this week that the White House’s call summary document left out important words and phrases.

But the worst news for Trump may be this: Even Senate Republicans who have staunchly defended Trump have started to indicate they are taking the impeachment effort more seriously. The reverberations from Trump’s slide among Republicans are seemingly being heard on Capitol Hill.

Silicon Valley’s favorite charity is asking its donors to give away hundreds of millions of dollars....
Eric Greitens' nonprofit was 'criminal enterprise,' but committee must end: Mo. lawma...
What happens to the Supreme Court (and the Constitution) if Trump wins
Trump’s policies have enabled police violence against black Americans
What were the other 2020 Democrats doing on debate day?
India’s coronavirus lockdown and its looming crisis, explained