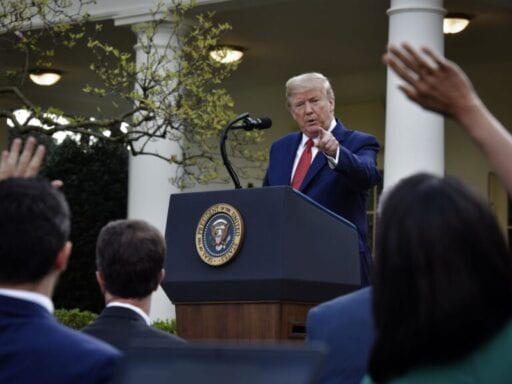 Trump is making up conspiracy theories about mask thefts, instead of using the DPA to produce more.

President Donald Trump is attacking New York hospital officials over something that isn’t their fault — and is a problem he himself could help solve with the Defense Production Act.

Speaking about the shortage of protective masks throughout the country at a press conference Sunday, Trump brought up New York hospitals’ dire need for the equipment during the coronavirus pandemic, which has infected over 140,000 Americans as of March 30. He suggested there was something strange about the rate at which providers are going through the masks.

The answer is that there is a great need for masks at the moment. Beyond the surging number of patients hospitals are seeing, best practices also dictate those who interact with patients infected with Covid-19 dispose of all the personal protective equipment (PPE) they are wearing during that interaction — masks included.

Given the shortage of PPE, however, medical professionals have begun to disregard those practices, using sterilization techniques and other methods to extend the life of their gear. But even with those measures, there is not enough PPE to go around. But rather than empathize with that distressing scenario, Trump suggested Sunday that the shortage has some sinister origins:

Something is going on, and you ought to look into it as reporters. Where are the masks going? Are they going out the back door? How do you go from 10,000 to 300,000? And we have that in a lot of different places. So, somebody should probably look into that, because I just don’t see, from a practical standpoint, how that’s possible to go from that to that. And we have that happening in numerous places — not to that extent; that was the highest number I’ve heard.

To make sure he was understood, the president later underscored his claim by saying, “I don’t think it’s hoarding … I think maybe it’s worse than hoarding.”

The remarks drew criticism from health care workers who did not appreciate being accused of stealing as they risk their lives to treat people with a novel illness, including from the president of the Greater New York Hospital Association, Kenneth Raske, who said in a statement, “New York’s health care workers are treating exploding numbers of Covid-19 patients around the clock — willingly and without complaint. … They deserve better than their president suggesting that PPE is ‘going out the back door’ of New York hospitals.”

Trump’s campaign responded to this criticism by tweeting a video from a press conference New York Gov. Andrew Cuomo gave on March 6, in which he said, “There have been thefts of medical equipment and masks from hospitals, believe it or not — not just people taking a couple or three, I mean just actual thefts of those products.”

President Trump is listening to health care professionals. Some have reported that people are stealing large numbers of masks and medical equipment from hospitals.

Cuomo went on to say he asked his state police to investigate the thefts, but also suggested it was opportunists who were stealing the equipment and reselling it, saying he’d directed officers to “look at places that are selling masks, medical equipment, protective wear, feeding the anxiety” — rather than to investigate hospital workers themselves.

It is true that some New York medical professionals have admitted — as a few did to Reuters’ Nick Brown and Joseph Ax — that they have resorted to stealing PPE. But not to resell, and not for any nefarious purpose: only so that they can keep working while protecting themselves and their patients.

“Masks disappear,” a nurse at New York’s Mount Sinai Hospital said. “We hide it all in drawers in front of the nurses’ station.”

Sometimes, Brown and Ax report, the masks are taken from areas of the hospitals that treat other types of patients by those treating coronavirus patients. This petty theft, a doctor at one hospital told the reporters, is done because the only masks available when the story was published on March 27 were those that had been donated by the staff’s family members or that team leaders had been able to buy with their own money on the open market.

This reporting would suggest there are some thefts, but hardly on the scale the president has suggested, and only what is needed to keep hospitals running given the federal government had not been able to provide them with badly needed supplies.

Trump can’t stop crime, but he could stop masks and ventilators from being in such high demand

As Vox’s Alex Ward has explained in detail, presidents are empowered to direct manufacturing of needed equipment during crises through the Defense Production Act (DPA).

The law works by giving the federal government priority in ordering raw materials and in taking delivery of goods — even if others are “in line” ahead of the federal government, it gets to receive its orders first. The DPA also allows the government to ask companies to make certain things, like masks, and to give financial or equipment loans to help those companies fulfill those requests.

Trump has wavered on using the act, or has refused to “invoke the P”, as he puts it, in any sweeping way. He has thus far only used it to require General Motors to speed up production and reduce the cost of their offered ventilators, and has refused to use it to push any other firm to produce anything else.

One reason Trump has cited for his refusal to use the act is that it would turn the United States into a socialist country.

Of course, as Ward has explained, the DPA doesn’t cause companies to be subsumed, or even partly owned, by the federal government — it just directs them to make items the country needs, like masks and ventilators.

All this makes the president’s strange accusations sad and ridiculous. The fact is, New York — and every place in the US currently struggling to treat high volumes of Covid-19 patients — needs goods that simply do not currently exist.

The scarcity of these materials has anecdotally led to some petty theft and overall led to criminals attempting to profit from a difficult situation. But spinning up conspiracy theories isn’t the way to solve the problem. Taking responsibility for the production of what citizens need to survive the coronavirus crisis is. And Trump can do so at any time.

Wildlife is in peril, but that doesn’t mean conservation has failed
Piers Morgan made fun of Daniel Craig for carrying his baby. The response from dads was adorable.
Trump’s policies are putting vulnerable immigrants at risk as coronavirus spreads
The perfect virtual video store isn’t Netflix. It’s DVD.com.
Trump echoes NRA talking points, showing that “background checks” talk was all a charade
A top House Democrat just lost his primary — to a socialist