Trump decries “political violence” at rally, then attacks the media and Democrats 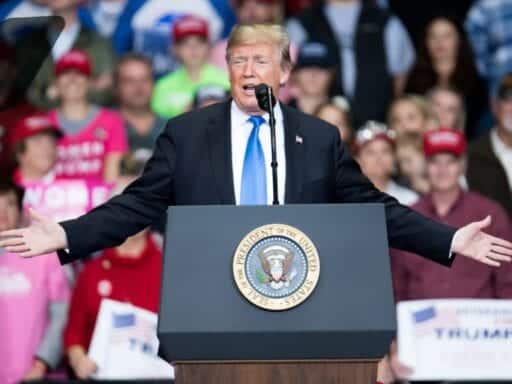 It’s back to business as usual.

President Donald Trump opened a rally in Charlotte, North Carolina on Friday decrying “political violence” after pipe bomb suspect Cesar Altieri Sayoc Jr. was charged with sending bombs to 13 prominent Democrats and critics of the president. But that nonpartisan message didn’t last long: He then transitioned into a regular Trump rally, complete with the typical “lock her up” chants and attacks on the media.

Trump has offered a dissatisfying response to the bombs sent to figures such as former President Barack Obama, former Secretary of State Hillary Clinton, and news outlet CNN this week. He seems to recognize that a typical presidential response would be to call for unity and denounce violence, but he can’t stay away from some of his divisive rhetoric.

Friday’s rally at the Bojangles’ Coliseum in Charlotte was no different: Trump began with an attempt at a measured response, and then even within those opening remarks transitioned to finger-pointing at the media and Democrats.

“Political violence must never, ever be allowed in America, and I will do everything in my power to stop it,” Trump said a few minutes into his speech. He called for “terrorist actions” to be prosecuted and punished “to the full extent of the law” and congratulated law enforcement for their work.

“Everyone will benefit if we can end the politics of personal destruction,” Trump said. “We must unify as a nation in peace, love, and harmony.”

He then pointed a finger at the media, who he said has a “major role to play as far as tone and as far as everything.” He decried “constant unfair coverage, deep hostility, and negative attacks” from the press.

“We have seen an effort by the media in recent hours to use the sinister actions of one individual to score political points against me and the Republican Party,” he said, eliciting boos and chants of “CNN sucks” from the audience.

Sayoc, a 56-year-old Florida man, appears to have been an avid Trump supporter, and his online activity includes pro-Trump memes, conspiracy theories, and threats to some of the people to whom he eventually sent pipe bombs, including former Vice President Joe Biden and former Attorney General Eric Holder.

Trump, who has been trying to stoke fears about Democratic Party mobs, then turned his attention to the other party. He said people don’t “blame the Democrat Party every time radical leftists seize and destroy public property and unleash violence and mayhem.”

His attacks continued into Saturday, with Trump tweeting out a link to a Breitbart story about the rally and his defense of his supporters, who the media was “smearing.”

Trump Thunders at Media for Smearing His Supporters after Bomb Scares https://t.co/Ggdhs9reY3 via @BreitbartNews

If Trump really is concerned about the pipe bombs and what they say about the state of political divisions in America, he’s not showing it.

Friday’s rally was largely business as usual — he talked about “Crooked Hillary” and “Cryin’ Chuck Schumer,” referring to the Senate minority leader from New York. He brought up California Democratic Rep. Maxine Waters (D-CA), who also was sent a bomb, but then backed off.

“I’m going to be nice tonight, so I won’t say,” Trump said. He has previously called her “low IQ.”

Most of the night was a typical Trump rally — he fired up the crowd by falsely claiming Democrats want open borders and pushing fears on immigration. He touted jobs numbers, complained about NATO, and made misleading statements on health care. He talked about “fake news.”

Trump seemed aware that his conduct was under scrutiny, emphasizing that he was going to be “nice” in his remarks. It’s a situation he’s been in all week: knowing what a president is supposed to do in these situations, and not being able to help himself in doing otherwise.

While speaking to reporters ahead of the rally on Friday, Trump said he took no blame for his rhetoric. “There is no blame,” he said. “There is no anything.”

He added that Republicans need to recapture their “momentum” after the bomb incidents and indicated that, if anything, he thinks he should go harder. “I think I’ve been toned down,” he said. “I could really tone it up.”

Rudy Giuliani’s rambling new statements on Michael Cohen and the Trump Tower meeting, decoded
AppleTV+, reviewed
Al Franken needs to stop comparing his resignation to death
Life Itself is a disaster of a movie, caught in a web of its own privilege
Biden is the only frontrunner without a disability plan
After losing more than $1 billion, GM makes a deal with striking workers