Trump demands Obama be made to testify in the Senate 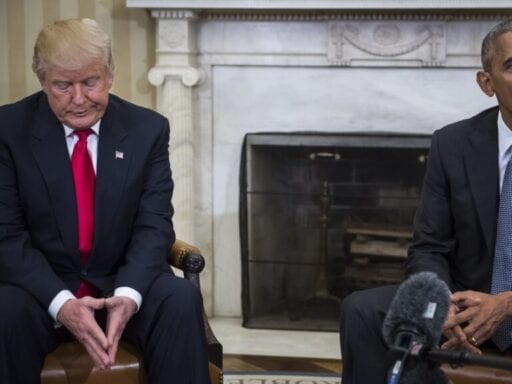 In his latest tweet, Trump seems to be ordering Sen. Lindsey Graham to put Obama through a kind of show trial.

For the past few days, President Trump has been talking nonstop about something he has termed “OBAMAGATE” — a largely incoherent conspiracy theory that positions former President Obama as the mastermind behind a conspiracy to use federal law enforcement to undermine Trump’s campaign and presidency.

It is, in effect, the new birtherism: an unfounded campaign against the legitimacy of America’s first black president that Trump is trying to exploit to rally the political faithful.

This morning, Trump seriously escalated his campaign against Obama, tweeting at one of his most reliable supporters in the Senate, Lindsey Graham, to force Obama to testify before Congress about this allegedly dastardly plot.

The specific wording of the tweet — “Do it… just do it” — is striking; the request sounds like a childish dare, as if Trump were daring Graham to shave his head during a late-night Zoom call. But the absurdity of the language shouldn’t distract from the nefariousness of the request.

If I were a Senator or Congressman, the first person I would call to testify about the biggest political crime and scandal in the history of the USA, by FAR, is former President Obama. He knew EVERYTHING. Do it @LindseyGrahamSC, just do it. No more Mr. Nice Guy. No more talk!

The president of the United States is labeling a fringe right-wing conspiracy theory “the biggest political crime and scandal in the history of the USA, by FAR.” He’s also more or less ordering a particularly compliant senator — who happens to chair the Judiciary Committee — to use the powers of the Senate to treat one of his predecessors as a potential criminal suspect or witness on the basis of this conspiracy theory.

Throughout Trump’s presidency, he has consistently treated the investigatory and law enforcement powers of the US government as tools to be deployed for purely political reasons. During the coronavirus crisis, when his presidency is once again in mortal danger, he has stepped on the gas on this kind of abuse of power — the Justice Department has dropped charges against Trump’s former national security adviser Michael Flynn, who had pleaded guilty, and Trump now seems to be trying to get them to treat Obama like a criminal.

In democracies, presidents are not supposed to use law enforcement agencies as shields for their crooked political allies and swords against their political enemies. The threat that Trump poses to the rule of law, and the basic principles of a free society, has never been clearer.