Trump didn’t want an investigation into Biden. He wanted a political show. 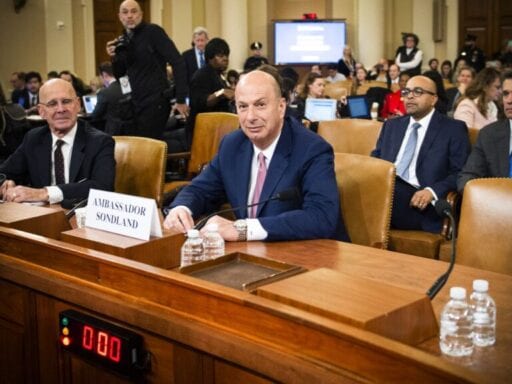 Sondland’s most quietly damning statement: A real investigation by Ukraine was not the explicit goal.

Ambassador Gordon Sondland’s Wednesday House testimony was full of revelations. One of them is that President Donald Trump never seemed to ask Ukraine for an actual investigation of Vice President Joe Biden or his son, Hunter.

All he wanted, according to Sondland, was a public announcement of an investigation. He wanted a show.

This striking evidence first surfaced during Intelligence Committee Chair Adam Schiff’s questioning, in which Schiff presses Sondland on what exactly the quid-pro-quo exchange was between Trump and Zelensky. Sondland says that Zelensky would receive a White House meeting in exchange for the announcement of an investigation into Burisma, the company whose board Hunter Biden served on, as well as alleged Ukrainian involvement in the 2016 election.

Sondland is clear: “He didn’t actually have to do them, as I understood it.” There was never an ask for an actual investigation, just an announcement:

SCHIFF: And in order to perform that official act [a meeting in the Oval Office], Donald Trump wanted these two investigations that would help his reelection campaign, correct?

SONDLAND: I can’t characterize why he wanted them. All I can tell you is this is what we heard from Mr. Giuliani.

SCHIFF: But he had to get those two investigations if that official act was going to take place, correct?

SONDLAND: He had to announce the investigations. He didn’t actually have to do them, as I understood it.

Daniel Goldman, the attorney who did a good chunk of the questioning for the Democratic side, came back to this issues later in the hearing. Here’s the key point:

GOLDMAN: Giuliani and President Trump didn’t actually care if they did them, right?

SONDLAND: I never heard, Mr. Goldman, anyone say that the investigations had to start or be completed. The only thing I heard from Mr. Giuliani or otherwise was that they had to be announced. … President Trump presumably, communicated through Mr. Giuliani, wanted the Ukrainians on-record publicly that they were going to do those investigations.

GOLDMAN: You never heard anyone say that they really wanted them to do the investigations.

SONDLAND: I didn’t hear either way.

Sondland’s revelation rips away the last of the pretense that Trump cared about corruption in Ukraine. He wanted a televised announcement of an investigation into Hunter Biden that could use to cast a pall on the Biden campaign, just as the email morass damaged Hillary Clinton in 2016. All he ever asked for was a sort of political show trial that would allow him to run the same playbook he ran against “Crooked Hillary.”