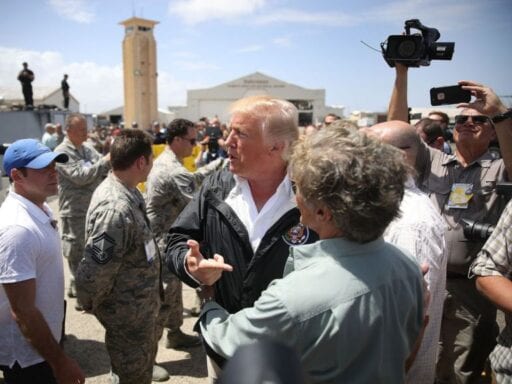 As the first deaths from Hurricane Florence are being reported, President Donald Trump is doubling down on his false claims that Hurricane Maria’s death toll of nearly 3,000 Americans in Puerto Rico last year was inflated in order to do him political harm.

The president, in a pair of tweets on Friday evening, said the number of people estimated to have died as a result of the 2017 storm in Puerto Rico went up “like magic” and that there’s “no way” the death count is actually so high. Trump first surfaced this new conspiracy theory on Thursday, suggesting that Democrats had somehow inflated the death toll in order to make him look bad.

That’s not what happened. Researchers at George Washington University in August published an independent report saying that 2,975 people died in Puerto Rico as a result of Hurricane Maria from September 2017 to February 2018. Puerto Rico’s government and Gov. Ricardo Rosselló, who commissioned the GWU study, have accepted the estimate and updated their official death toll from Hurricane Maria accordingly.

“When Trump visited the island territory last October, OFFICIALS told him in a briefing 16 PEOPLE had died from Maria.” The Washington Post. This was long AFTER the hurricane took place. Over many months it went to 64 PEOPLE. Then, like magic, “3000 PEOPLE KILLED.” They hired….

….GWU Research to tell them how many people had died in Puerto Rico (how would they not know this?). This method was never done with previous hurricanes because other jurisdictions know how many people were killed. FIFTY TIMES LAST ORIGINAL NUMBER – NO WAY!

The context of Trump’s tweets are troubling on their own, but they also come as Hurricane Florence has made landfall on North and South Carolina, causing catastrophic flooding, leaving almost 1 million people without electricity, and killing several people, including an infant.

The research on Hurricane Maria’s death toll is entirely plausible

In the first week of Hurricane Maria in 2017, the government said the official death toll was 16. They later updated it to 64, where it remained until August, though researchers and several other media outlets, including Vox, found evidence that the number was likely much higher.

The estimate of 2,975 deaths is the best we now have. But it is still just that — an estimate — and could change at some point. Gov. Rosselló acknowledged as much in August, saying, “It could be less, it could be more, as time passes.” But there’s good reason to believe that the death toll is closer to that than the original 16 or 64 figures.

As Vox’s Alexia Fernandez-Campbell points out, GWU’s findings are consistent with estimates from scientists at Harvard and Penn State. Many people died after Hurricane Maria but still because of it — because they couldn’t get clean water, prescription drugs, medical attention, food, or other things they needed to stay alive. Or because of suicide.

Those are indirect hurricane deaths normally counted in a disaster’s official death toll. In other words, not, as Trump claimed in his Friday evening tweets, not some method that “was never done with previous hurricanes.”

The GWU researchers found that the death count remained at 64 for so long because Puerto Rican doctors had been poorly trained and didn’t understand Center for Disease Control and Prevention guidelines for attributing deaths to a disaster in death certificates, Vox’s Eliza Barclay explained:

Which meant that in the first few weeks and deaths after the storm, doctors failed to record many deaths that were indirectly related to the storm — but still worthy of inclusion in the death toll, per CDC guidelines — such as people who couldn’t get medical care because of the ongoing power outage. In the absence of reliable data from death certificates, researchers then used a statistical method approved by the World Health Organization to measure excess mortality to come up with the 2,975 deaths.

“Gathering data, including death tolls, during and after a catastrophe is often difficult but researchers have developed a number of approaches over the years,” Samantha Montano, a disaster expert and writer, told Vox. “The methodology used in the GWU study was, in my opinion, an appropriate approach given the constraints of the situation.”

The GWU researchers are standing by their study. Gov. Rosselló responded to Trump’s Friday claims on Twitter, offering to walk him through the report and telling him there is “no reason to underscore the tragedy” in Puerto Rico.

“I hope you consider sending a message of support to show you stand with all of the US Citizens in Puerto Rico that lost loved ones,” he wrote. “It would certainly be an act of respect and empathy.”

Does Congress need to approve any military action against Iran? Republicans aren’t so sure.
The latest batch of swing state polls shows a healthy Biden lead
Trump just signed a bipartisan bill to confront the opioid epidemic
9 ideas to solve the broken institution of policing
How Russian hackers infiltrated the federal government
Trump is woefully confused about why more coronavirus testing is vital