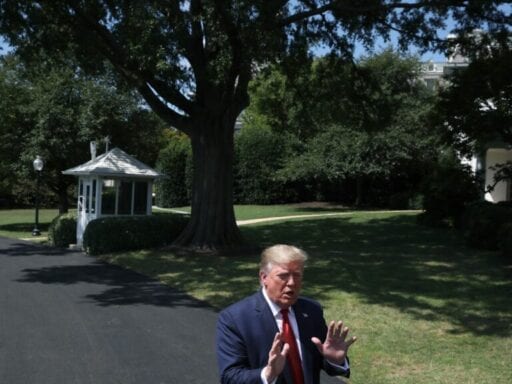 It took Trump two weeks to go from saying he wanted to do something to trying to justify doing nothing.

“I’m looking to do background checks,” Trump said, without providing any details. “I think we can bring up background checks like we’ve never had before … [Congress is] getting close to a bill.”

“We have to have very meaningful background checks,” he added.

What a difference two weeks makes. During a Q&A session with reporters on Wednesday, Trump completely reversed himself, saying, “We already have strong background checks.”

He also portrayed the National Rifle Association — which spent $30 million to elect him — as something akin to a co-equal branch of government, and echoed NRA talking points by expressing concern that any new gun control measures would be “a slippery slope.”

Asked what happened to his appetite for background check legislation, Trump abruptly changes the topic to the border, then says “we’re dealing with the NRA” — as if the gun lobby is a co-equal branch of government.

At another point, Trump was pressed on whether he regards the reality that 109 Americans die each day from gun violence as a public health emergency. He essentially responded by saying all deaths matter.

Trump’s comments came a day after he reportedly called NRA chief executive Wayne LaPierre and informed him that he’s no longer interested in pursuing legislation that would mandate universal background checks for all gun sales.

“He was cementing his stance that we already have background checks and that he’s not waffling on this anymore,” a source who was briefed on the call told Elaina Plott of the Atlantic. “He doesn’t want to pursue it.”

Trump has done this before

Trump’s comments after the shootings in El Paso and Dayton weren’t the first time he’s pretended to be interested in background checks, only to reverse course after the issue fell from the front pages. In the immediate aftermath of a shooting at a high school in Parkland, Florida, that left 17 dead in February 2018, Trump said during a news conference, “There’s a movement on to get something done. We want to be very powerful on background checks.”

But nothing came of it, and four months later, Trump addressed the NRA, saying, “Your Second Amendment rights are under siege. But they will never, ever be under siege as long as I’m your president.”

Both last year and this month, Trump responded to mass shootings by initially pushing vague “background checks” legislation to create the perception that he’s doing something. But he then quietly moves on when gun violence is no longer dominating the headlines.

The Trump administration has taken a couple of steps to address gun violence. Late last year, the administration published a regulation banning bump stocks, which effectively let semiautomatic weapons mimic machine guns and were used by the Las Vegas shooter in October 2017 to carry out the deadliest mass shooting in the country’s recent history. And in March 2018, Trump signed a spending bill that, as the Atlantic put it, used “a combination of incentives and punishments to prod federal agencies and the military to upload records into the background-check system for purchasing guns.”

Neither of those measures, however, was enough to prevent the El Paso and Dayton attacks. And even if Trump did throw his weight behind universal background checks and Congress sent a bill implementing them to his desk, it really wouldn’t be sufficient — as Holmes Lybrand of CNN explained, it’s doubtful background checks would have prevented the El Paso and Dayton shooters from obtaining their weapons:

There is no indication that the shooting in Dayton, Ohio, would have been prevented by proposed universal background checks or legislation to bolster the federal background check system. The alleged El Paso, Texas, shooter purchased his firearm legally and there is no evidence that he had a criminal history that a background check would’ve caught.

And as a mass shooting that killed three and injured 15 more late last month in Gilroy, California, illustrated, state-level action is also insufficient. Although California has strong gun laws, the gunman simply traveled to Nevada and bought a WASR-10, a derivative of an AK-47, and then traveled back to the Bay Area with it. That gun, like the ones used in El Paso and Dayton, allow mass shooters to shoot 15 or more people within 30 seconds.

Trump, however, wants to talk about everything besides federal action on high-powered guns. In recent days, he has sought to reframe the El Paso and Dayton shootings as really being mental health problems — never mind that other countries have people with mental illnesses without having regular mass shootings — and floated the idea of building new mental institutions.

Trump frames gun violence as a mental illness problem and says “I think we have to start building institutions again.” pic.twitter.com/aiJ1N98HFb

Trump no longer deserves the benefit of the doubt

CNN reported on Wednesday that at least 27 people have been arrested over threats to commit mass shootings since the shootings in El Paso and Dayton. Unfortunately, in today’s America, the question of the next mass shooting is one of when, not if.

The next time around, Trump — who in the wake of Parkland expressed profound confusion about just how easy it is to obtain high-powered firearms — shouldn’t get the benefit of the doubt. His talk about “background checks” is just a lot of sound and fury meant to conceal the fact that he intends to do nothing.

The extraordinary danger of being pregnant and uninsured in Texas
Why it can seem appealing to move home during a crisis — even when it’s not recommended
Actor Mark Duplass apologizes for praising conservative pundit Ben Shapiro
The RNC weaponized exhaustion
Outdoor dining and drinking is allowed. But is it safe?
Kentucky AG releases Breonna Taylor grand jury audio recordings