Trump endorsed one of his critics. Will it be enough to help her win her runoff in Alabama? 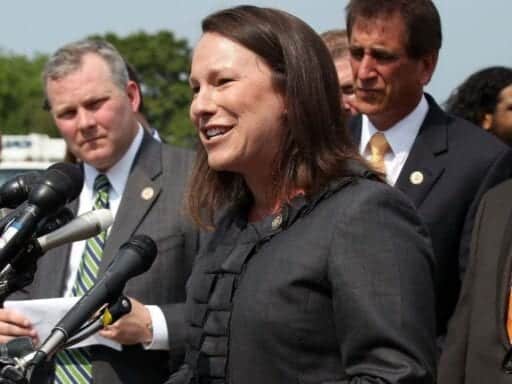 Rep. Martha Roby says she has “no regrets” about her 2016 critiques of the president.

Rep. Martha Roby — who failed to win her primary outright in June — hopes to turn it all around on Tuesday during the runoff election.

Roby backed off her endorsement of Donald Trump after the infamous Access Hollywood tape surfaced in October 2016 — and got slammed during the primary for her critiques. Potentially because of such attacks, she failed to garner 50 percent of the vote against competitor Bobby Bright, which sent both of them to a runoff.

Since that primary, however, Roby has secured a coveted endorsement from Trump, which she hopes will guarantee a victory on Tuesday.

Roby has had a history of robust wins in Alabama’s Second Congressional District since she was elected to the House in 2012 — but many saw her lackluster primary performance as a direct result of comments she had levied against the president, a sore spot that Bright, a former Democrat turned Trump fan, hammered mercilessly in his campaign advertising. (“Roby turned her back on the president when he needed her most,” one attack ad argued.)

Her short-lived opposition toward Trump has been seen as an Achilles’ heel in a state that overwhelmingly continues to support him. Although Roby was elected by double digits in 2012 and 2014, certain Republicans were so upset by her response to the Access Hollywood tape that they even pushed a last-minute campaign for a write-in candidate in 2016, with more than 29,000 voters opting to go that route.

Roby still won, but her margin of victory was much slimmer than in previous races. Because of this dynamic, other Republicans sensed an opening in this year’s primary, with a number of candidates — including Bright — lining up to take her on. While Roby was still seen as the slight favorite going into the runoff on Tuesday, GOP leaders in Alabama say that Trump’s endorsement will help make that victory all the more certain.

Although Alabama candidates have proven the exception to the rule (see: Roy Moore and Luther Strange), Trump’s endorsement has been pivotal in a number of elections in this primary cycle (see: Mark Sanford). In June, Trump — after reported cajoling from House Republican leaders including Kevin McCarthy and Paul Ryan — appeared to extend Roby an olive branch.

In one of his trademark tweets, Trump threw his support behind Roby and slammed her opponent as a “Nancy Pelosi voting Democrat.”

Congresswoman Martha Roby of Alabama has been a consistent and reliable vote for our Make America Great Again Agenda. She is in a Republican Primary run-off against a recent Nancy Pelosi voting Democrat. I fully endorse Martha for Alabama 2nd Congressional District!

Many think Roby would have still eked out a win without the Trump endorsement, but several Republican leaders say it’s helpful to leverage both his backing and his critiques of her opponent. Bright has a pretty big weakness in his own record: He served for one term as a Congress member representing the district … as a Democrat.

“It’s a big deal,” Alabama GOP Rep. Bradley Byrne told Roll Call. “President Trump is very popular in Alabama in general, but in the southern part of the state that Congresswoman Roby and I represent, he’s even more popular.”

Trump’s high approval ratings in the region mean that his position on Roby will likely bear significant weight in this race, according to Jess Brown, a retired political science professor from Athens State University. “Alabama is one of six to eight states where Trump’s approval rating is high,” Brown told Al.com. “With a low turnout as expected for the runoff, the Trump endorsement, while probably not needed for Roby to win, is a net positive for her.”

In posting the endorsement, Trump also neutralized one of the key points of attack Bright was using against Roby. “The only real negative I’ve heard has been her lack of support for Trump — and so when Trump came out and endorsed her, it negated that,” Bill Armistead, a former state GOP chair, said in an interview with Politico.

Bright has his own troubled record to defend

Bright is also a familiar face to voters in the Second Congressional District. He was the first Democrat the district had elected in more than four decades, and served as its representative from 2009 to 2011 until Roby unseated him. Although he identified as a Democrat during his previous time in Congress, Bright says he’s always been a firm proponent of conservative viewpoints.

The Montgomery Advertiser’s review of Bright’s voting record shows he is quite conservative. He sided with Republicans more frequently in Congress than he did with Democrats during his tenure, and has long backed pro-gun and anti-abortion stances.

There’s one vote, however, that continues to haunt him: Bright voted to support Nancy Pelosi for the House speakership in 2009. Roby has been hitting him with that fact across her campaign ads in an effort to drill down on his partisan past.

“With his vote in favor of Nancy Pelosi, Democrat Bobby Bright helped to pave the way for Obamacare and the countless crippling regulations that continue to burden businesses and hardworking families in Alabama,” a Roby spokesperson told the Advertiser.

Bright, meanwhile, has sought to frame himself as more closely connected to the people who live in the district and paint Roby as a creature of the Washington swamp. He’s said her Trump endorsement was the result of political backroom dealings and adopted much of the president’s “America First” rhetoric as his own.

He’s also argued that he opted to stay on committees that were more relevant to their constituency when he held the seat. Bright sat on the Armed Services, Agriculture, and Small Business committees during his time in Congress, while Roby currently sits on the Judiciary and Appropriation committees.

Roby and Sanford aren’t quite the same

One of the immediate comparisons that come to mind in examining Trump’s treatment of Roby is Rep. Mark Sanford, another Republican Congress member who has been a vocal critic of the president. While Trump has seemingly embraced Roby with open arms, he did the exact opposite with Sanford during the South Carolina primary, tweeting a critique hours before polls closed that ultimately damned his campaign.

There’s another key characteristic that separates the two. While both lawmakers have espoused their concerns with the president, Roby has been a consistent supporter of his policies. Sanford, meanwhile, has been a recurring detractor of them. According to a FiveThirtyEight analysis, Roby has voted in line with Trump’s position more than 96 percent of the time, while Sanford has done so slightly more than 69 percent of the time.

Her backing for Trump’s record is something Roby has touted repeatedly on the campaign trail, where she’s vocally touted her support for efforts like the border wall. “I’m proud of my record. I’m proud we’ve been able to do the things and accomplish the things the people sent me to Washington to do,” she said during an event in May, the Montgomery Advertiser reports. “But there’s work left to be done.”

This record could be one of the factors that convinced Trump to support her. “The truth is that she is in fact a reliable vote for him,” University of Alabama political science professor Richard Fording told Al.com.

Roby is walking a fine line and maintaining her critiques

Despite the potential harm they could have on her campaign, Roby hasn’t backed down from her 2016 comments about Trump. In an interview with Fox News last week, she said she has “no regrets” about her prior critiques.

During the presidential election, Roby — alongside a number of congressional lawmakers — had said that “Trump’s behavior makes him an unacceptable candidate for president,” after the Access Hollywood tape revealed him bragging about assaulting women. “I cannot look my children in the eye and justify a vote for a man who promotes and boasts about sexually assaulting women,” she said at the time.

In an interview with Fox News, she also pushed back on the ongoing efforts to relitigate the 2016 election. “The campaign is long over. We have been governing and President Donald Trump is just that — he’s president of the United States. Of course, I want him to be successful.”

Starting this past weekend, Roby’s campaign has been running robocalls recorded by Vice President Mike Pence, which highlight the Trump endorsement, according to BuzzFeed.

Clearly, she’s not the only one who’s ready to move on.

Poll: Elizabeth Warren now leads the Democratic primary field in Iowa
As He Questions His Opponent’s Health, Trump Finds His Own Under Scrutiny - The New York Times
This new airplane model will know when you’ve unbuckled your seatbelt
The EU will bar American travelers because of US coronavirus spread
How to talk to kids about racism, explained by a psychologist
Why more Republican women are running for the House than ever before