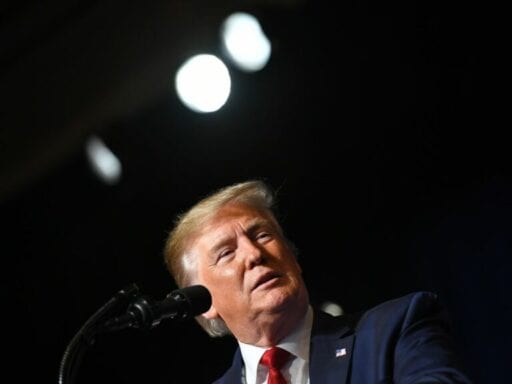 His Friday announcement ups the ante even as worries about a potential recession continue to grow.

President Donald Trump on Friday announced increased tariffs in response to penalties China had levied that morning on $75 billion worth of US products — a wave of tariffs that were themselves a Chinese response to earlier US penalties.

These latest US levies, a development Trump waited to announce until after the stock market had closed, raise existing penalties on $250 billion in goods being imported from China to a 30 percent tax. They also levy an extra 5 percent tax — for a total of 15 percent — on another $300 billion in products that were set to be taxed starting September 1. The tariff hikes on the former goods are slated to go into effect on October 1.

For many years China (and many other countries) has been taking advantage of the United States on Trade, Intellectual Property Theft, and much more. Our Country has been losing HUNDREDS OF BILLIONS OF DOLLARS a year to China, with no end in sight….

….Sadly, past Administrations have allowed China to get so far ahead of Fair and Balanced Trade that it has become a great burden to the American Taxpayer. As President, I can no longer allow this to happen! In the spirit of achieving Fair Trade, we must Balance this very….

…unfair Trading Relationship. China should not have put new Tariffs on 75 BILLION DOLLARS of United States product (politically motivated!). Starting on October 1st, the 250 BILLION DOLLARS of goods and products from China, currently being taxed at 25%, will be taxed at 30%…

…Additionally, the remaining 300 BILLION DOLLARS of goods and products from China, that was being taxed from September 1st at 10%, will now be taxed at 15%. Thank you for your attention to this matter!

Trump’s move ups the ante on an increasingly tense trade war that’s causing growing fallout in the stock market. In anticipation of these taxes, the Dow dropped more than 600 points on Friday after Trump tweeted out a threat earlier in the day. As Vox’s Jen Kirby has reported, Trump may be reacting to China’s latest moves now, but the country’s recent tariffs were actually in response to actions he had previously taken:

China, of course, is pushing back against Trump’s own levies. The president in August announced 10 percent tariffs on $300 billion in Chinese products starting September 1, which, when combined with previous tariffs, effectively taxes nearly all Chinese goods.

Friday’s announcement builds off several earlier rounds of tariffs that Trump had previously laid out. Last fall, the US levied a 10 percent tariff on $200 billion in Chinese imports, with a focus on products that are predominately sold to businesses. This past May, the administration raised that tax to a 25 percent tariff. (Those are the goods that will now be taxed at 30 percent.) Additionally, Trump set another 10 percent tariff to go into effect on September 1 on $300 billion in Chinese goods, a tax that’s expected to affect more consumer products. (Those goods will now be taxed at 15 percent.)

Before China announced its retaliatory tariffs Friday, Trump had said he would delay some of the tariffs slated for September 1 due to concerns that they would slow spending during the holiday season. Those tariffs applied to popular consumer goods including cellphones and clothing and are now scheduled for December 15, a timeline his Friday tweets did not comment on.

Trump’s use of tariffs is part of a larger protectionist strategy he’s employed in what he says is an effort to bring jobs back to the US, curb the US trade deficit, and hold China accountable for alleged intellectual property abuses. But as Vox’s Kirby noted, the world’s two largest economies don’t seem set to resolve their differences anytime soon:

China’s latest move is a reminder that Washington and Beijing are no closer to ending this economic brinksmanship or signing any sort of deal. China and the US are supposed to resume trade talks in September, but no date has been set yet.

Given the uncertainty plaguing not only the US economy but other economies around the world — including Germany and China — Trump’s ongoing spat over tariffs does little to ease worries about a potential recession, even if investors won’t fully react to the news until Monday.

The Senate just passed a $480 billion “interim” stimulus bill to tide over small businesses
A coronavirus reading guide for the perplexed, the anxious, and the obsessive
Airlines to Trump: we won’t help you separate migrant kids from parents
After another mass shooting, Trump chooses to focus on knife crime — in London
Why the US has failed in its coronavirus response, in one Trump interview
Los Angeles voters just delivered a huge win for the defund the police movement