Trump finally had a competent press conference on the coronavirus 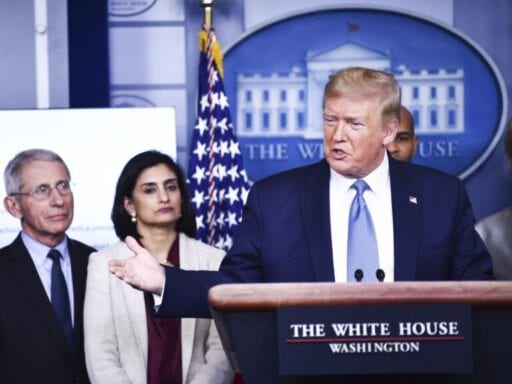 It’s the bare minimum, but it’s important for public health.

President Donald Trump finally held a press conference on Monday in which he didn’t contradict the advice of experts and gave solid advice to Americans on the coronavirus pandemic — after weeks of a public response that experts have described as unhelpful and disturbing.

At the top of the conference, Trump talked up new guidelines by the federal government about what individuals should do to slow the spread of Covid-19, the disease caused by the novel coronavirus.

“My administration is recommending that all Americans, including the young and healthy, work to engage in schooling from home when possible, avoid gathering in groups more than 10 people, avoid discretionary travel, and avoid eating and drinking at bars, restaurants, and public food courts,” Trump said.

The guidelines emphasize social distancing — a key part of what experts argue is necessary to slow the illness and save lives.

This was a noticeable backtrack for Trump, who on Sunday suggested that young people don’t have to worry about Covid-19 and argued “it’s a very contagious virus, it’s incredible, but it’s something we have tremendous control of.”

Trump even walked back those specific comments, claiming he meant that his administration is doing a good job trying to control the situation. Asked whether he meant if the virus itself is under control, he responded, “That’s not under control for any place in the world.” He also acknowledged that the current outbreak, and the economic impact from it, could continue for months.

He also gave the podium to experts, including respected public health officials like Anthony Fauci and Deborah Birx, to explain both the guidelines themselves and the evidence behind them. Trump even let them correct his comments — particularly that the guidelines will be reevalauted after 15 days, after Trump suggested they could be necessary until July or later.

This is, in many ways, Trump meeting the lowest of bars possible as the president during a disease outbreak: calmly providing correct information, leaning on the experts, and trying to rally the American public to action.

But it’s a still marked shift from where the Trump has been in the past few weeks. He previously tweeted comparisons to the common flu, which in fact appears to be less deadly and spread less easily than the coronavirus. He called concerns about the virus a “hoax.” He said on national television that, based on nothing more than a self-admitted “hunch,” the death rate of the disease is much lower than public health officials projected. And in February, he said of the coronavirus, “One day it’s like a miracle, it will disappear.” (As of March 16, the country has more than 4,100 confirmed cases and 71 deaths, according to Johns Hopkins University.)

Public health experts were highly critical of this messaging. Ashish Jha, director of the Harvard Global Health Institute, called it “deeply disturbing,” adding that it’s “left the country far less prepared than it needs to be for what is a very substantial challenge ahead.”

Now, there were still Trumpy moments, like when he gave his administration a 10 out of 10 for its response to the crisis — which many public health experts would disagree with.

And whether Trump’s new tone lasts in the days and weeks ahead, especially as the pandemic deepens, remains to be seen. But it’s a welcome development, however long it lasts, that could help save lives.