Trump finally uses the Defense Production Act to make ventilators. But that might not solve the problem. 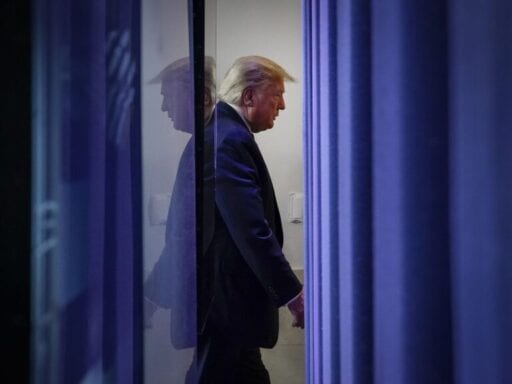 Share
Loading...
President Trump has been widely criticized for his slow and erratic response to the coronavirus pandemic. | Drew Angerer/Getty Images

Making ventilators is hard. Getting politicians to agree on paying for them is harder.

The ventilator shortage created by the novel coronavirus has forced President Trump to do something he has spent much of his presidency fighting against: use government authority to compel a private business to do his bidding.

Trump announced today that he is using the Defense Production Act (DPA) to force General Motors (GM) to carry out federal contracts to make ventilators and give those contracts priority over any other orders. While this may make more ventilators available sooner, it still doesn’t guarantee that America will have enough ventilators by the time patients across the country need them.

Earlier this week, President Trump expressed doubt about the need for ventilators and used the issue to attack Democratic state governors, including New York’s Andrew Cuomo. The president’s controversial statements about ventilators follow several weeks of urgent debate about the global shortage of these life-saving machines in the face of a disease that attacks the lungs. Because of this, some companies that make other products have stepped forward to possibly fill the shortage by using their factories to make ventilators.

The White House was set to announce a deal with Ventec Life Systems, a Washington state-based ventilator maker, and GM on Wednesday, according to the New York Times. The car company would produce Ventec ventilator systems in one of its factories, throwing its manufacturing might behind addressing the nation’s shortage. But that announcement was put on hold once the Federal Emergency Management Agency (FEMA) saw it would cost more than $1 billion, with both the number of ventilators the joint venture could actually produce and the number of ventilators that will be needed still unknown.

Most medical experts agree we will need more ventilators than we currently have — any additions to the supply could mean the difference between life and death for thousands of Americans — but according to the Times, some government officials were afraid of being left with an “expensive surplus” of the machines if they bought too many.

On Friday, President Trump blamed GM for the holdup, saying the company initially claimed it could produce 40,000 ventilators but had to revise those estimates down to 6,000, which would take at least a month. He also implied that cost was, indeed, an issue.

As usual with “this” General Motors, things just never seem to work out. They said they were going to give us 40,000 much needed Ventilators, “very quickly”. Now they are saying it will only be 6000, in late April, and they want top dollar. Always a mess with Mary B. Invoke “P”.

Trump’s tweet followed an interview with Sean Hannity, during which the president downplayed the need for more ventilators, even as many public health experts and governors have expressed an urgent need for them. Governor Andrew Cuomo said on March 24 that New York, the current epicenter of the outbreak in the US, needs 30,000 ventilators in the next two weeks as the coronavirus outbreak reaches a peak in his state.

“I have a feeling that a lot of the numbers that are being said in some areas are just bigger than they’re going to be. I don’t believe you need 40,000 or 30,000 ventilators,” Trump said, doubting Cuomo. “You go into major hospitals sometimes, and they’ll have two ventilators. And now all of a sudden they’re saying, ‘Can we order 30,000 ventilators?’”

After the Hannity interview and his tweets about GM, Trump then yelled at Ford to “get going” on ventilators, too, but there is no indication that Ford will do any better than GM. In fact, it’s unlikely that it can. Now that Trump is actually using the power of the DPA, quickly making large numbers of ventilators remains a complicated task.

Ventilators, simply put, are machines that help people breathe when they can’t breathe on their own. Air is delivered through a tube in the patient’s windpipe into the lungs, mimicking the way we breathe naturally.

Covid-19, the disease caused by the coronavirus, targets the lungs and can cause complications like pneumonia and acute respiratory distress syndrome. Severe cases will require a ventilator to be able to deliver enough oxygen from the lungs to the rest of the body. Without one, the patient could die.

A ventilator shortage, then, will mean some patients are denied lifesaving care. And, as has already happened in Italy, doctors may have to choose which patients get ventilators and therefore live and which ones don’t and die. Hospitals in America are already preparing for this possible future: A draft letter from Michigan’s Henry Ford Health System was leaked on social media on Thursday night that outlined Henry Ford’s possible policy if it has to choose which of its patients get ventilators in the case of a shortage — and which ones don’t. Henry Ford said the letter was not yet an active policy.

According to the New York Times, there are about 170,000 ventilators in the US while the American Hospital Association estimates 960,000 people will need them over the course of the pandemic — which is why public health experts continue to recommend that people do whatever they can to slow the spread of the virus so that not all patients need ventilators at the same time.

“In a worst-case scenario, in which there is an exponential surge in Covid-19 cases, the need for ventilators could greatly outstrip the number available,” Dr. Tom Frieden, former head of the Centers for Disease Control and Prevention (CDC) and current CEO and president of Resolve to Save Lives, told Recode.

There are some simple reasons why we might end up with a shortage. In normal circumstances, 170,000 ventilators are more than enough for the ICUs and operating rooms that use them. In fact, some of the ventilators we do have are in storage, showing that there isn’t — at least, there wasn’t — a pressing need for them. Meanwhile, hospitals aren’t in the habit of buying extra equipment they don’t need. They typically can’t afford to do so.

Even if they could buy them, manufacturers are struggling to fulfill the orders. Eric Gjerde, the chief executive of a small ventilator company called Airon Corporation, told Wired that his company sells 50 ventilators “in a good month.” Now, he’s getting orders for thousands and isn’t able to fulfill them all.

“Making ventilators is not a trivial process,” Gjerde said. “It’s just too dangerous to be thrown into the hands of people who don’t know what they’re doing.”

Other companies are experiencing a similar push to increase manufacturing. GE Healthcare, which makes medical devices including ventilators, issued a statement saying it is exploring “all options to support this increased need,” including increasing production lines and adding shifts. A Swiss company told the Wall Street Journal that it is trying to double its ventilator production to 400 units a week, and an Irish company told the paper it is doubling its workforce to try to meet demand.

Tesla to the rescue?

And then there’s Elon Musk. Never one to pass up proposing tech solutions to well-publicized problems, Musk tweeted on March 19 that his companies, namely Tesla and SpaceX, could also produce ventilators to help fill shortages, adding that they “are not difficult.”

Our country is facing a drastic shortage and we need ventilators ASAP — we will need thousands in this city over the next few weeks. We’re getting them as fast as we can but we could use your help!

We’re reaching out to you directly.

No. There are several factors preventing, say, an electric car factory from instantly switching over to making ventilators. Musk saying they “cannot be produced instantly” is an understatement.

In America, ventilators are tightly regulated and must undergo a years-long rigorous testing and approval process for reasons that should be obvious: When you put someone’s life in the hands of a machine, you have to make sure it works. As MIT Technology Review explains, there are also supply chain issues with both the materials needed to make these machines and the people who know how to build them, neither of which Tesla or SpaceX factories likely have immediately available. Matt Callaghan, the co-founder of One Breath, which Tech Review profiled, intended to produce ventilators for countries in the developing world. He said that the soonest it could even start producing its devices for American hospitals would be nearly a year — and that was a best-case scenario.

“[That] makes us a second-wave solution when you’re looking at the current outbreak,” Callaghan told Tech Review.

Ventilators aren’t cheap, either. At $25,000 to $50,000 each, according to the Washington Post, they can be less expensive than a Tesla, but they also require skilled people to run them. All expenses considered, keeping extra ventilators on hand might require an investment that many hospitals can’t afford, especially if they may never need them. In the case of a pandemic, the US government would buy them instead — other countries’ government are doing this — but it has yet to do so. Trump’s new order to GM could change this, but, as it has recently made clear, the Trump administration is just as reluctant to spend money on possibly unnecessary ventilators as hospitals are (though it does have significantly more funds available to do so).

“Because these are complicated pieces of medical equipment and are built from hundreds of smaller parts produced by companies all over the world — all of which are facing an increase in demand right now — there is no simple way to rapidly increase production,” Frieden said. “Furthermore, operating ventilators requires tubing, oxygen, trained staff, and many other materials.”

That said, it’s not out of the realm of possibility that Tesla or Musk could, at some point, produce ventilators. Musk is in talks with Medtronic to produce its ventilators in one of its solar panel factories, GM has its agreement with Ventec, and Ford is working with GE Healthcare to try to increase its ability to produce ventilators. Over in the United Kingdom, which only has 5,000 ventilators, vacuum cleaner kingpin Dyson — a company that does specialize in machines that regulate the movement of air — designed its own ventilator. The UK’s National Health Service has already ordered 10,000 of them, but they have yet to be produced beyond the prototype stage, nor have they been approved by UK regulators — a process that would normally take two to three years there but will presumably be sped up in this case.

But how many ventilators these efforts may produce (if any) and when is still very much unknown. Part of the reason why FEMA balked at ordering ventilators from the General Motors-Ventec agreement, the Times said (and Trump seemed to confirm in subsequent tweet), was that the number of ventilators it said it could produce for that money steadily shrank — from an initial run of 20,000 down to 7,500 or even just 5,000. This was due, in part, to the White House’s inability to nail down a number of ventilators it wants, but it was also, the Times said, “an apparent recognition that auto transmissions and ventilators had very little in common.”

But that doesn’t mean they shouldn’t try.

“Anything industry can do to help us accelerate production of ventilators will be welcome,” Frieden said.

The good news is that America doesn’t have a shortage yet. While many predictions say we will run out of hospital beds and lifesaving equipment at some point, the future has yet to be written. Do your part to flatten the curve and maybe this virus will spread slowly enough that our future won’t look like Italy’s present.

Update, March 27, 12:30 pm ET: This post has been updated to include new information about GM’s efforts to make ventilators as well as President Trump’s response.

Update, March 27, 4:50 pm ET: This post has been updated to include new information about Trump’s use of the DPA on GM.