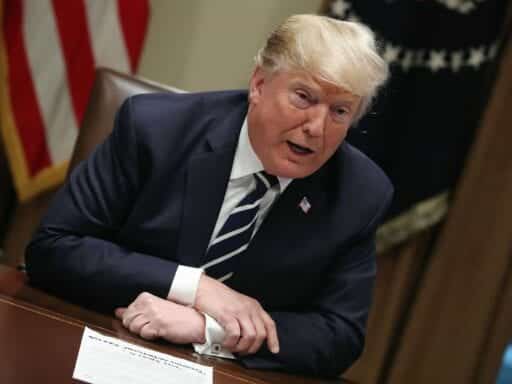 It’s not exactly plausible deniability, but they’ll take it.

When my son and his toddler friends misbehave and fight on the playground, the parents usually make the kids apologize even if it’s totally insincere just for the sake of establishing the precedent. In somewhat the same vein, President Donald Trump addressed the nation from the Oval Office on Tuesday to explain that he “misspoke” at his bizarre joint appearance with Vladimir Putin in Helsinki on Monday.

He says he actually never meant to cast doubt on the US intelligence community’s determination of Russia culpability for hacking the Democratic National Committee and Hillary Clinton campaign chair John Podesta’s email account.

It was all a simple misunderstanding, you see, in which Trump said “would” when he meant to say “wouldn’t.”

This makes absolutely no sense, but it may give congressional Republicans what they’ve been looking for ever since Trump left the podium in Helsinki: a way to avoid doing anything about the fact that the president is, for whatever reason, trying to cozy-up to Russia and disrupt the traditional American alliance system. It’s not exactly plausible deniability, since there’s nothing plausible about it. But it deniability.

To state the obvious, Trump very clearly did not make a would/wouldn’t gaffe here — the sentence makes no sense in context unless you take Trump to be exonerating Russia. (This server thing is nonsense, by the way.)

Look this makes no sense. Read the full sentence. pic.twitter.com/xJ46PCNlR2

And if Trump really did misspeak, the time to correct it would have been during Monday night’s Sean Hannity interview or the many intervening tweets.

Despite the best efforts of Trump allies to make this a narrow question of Trump’s sensitivity about the election issue, his pro-Russian stance during the press conference was considerably more wide-ranging. Asked whether Russia had done anything at all to contribute to the deterioration of US-Russia relations, Trump was not able to name any specific acts — not murdering hundreds of passengers on Malaysia Airlines Flight MH-17, not complicity in Bashar al-Assad’s war crimes in Syria, not the invasion of Crimea, nothing — other than special counsel Robert Mueller’s investigation.

Congressional Republicans want an out

Trump’s shameful performance on Monday in his meeting with Putin generated significant rhetorical pushback from congressional Republicans — but, as usual, zero action.

Nobody in the GOP caucus moved to disclose Trump’s tax returns so we could better understand what financial shenanigans undergird his unusual affection for Putin. Nobody suggested hearings at which former Trump administration officials could be compelled to reveal what they know. They were clearly uncomfortable with the line Trump took but also uncomfortable with the idea of actual confrontation.

And after Trump finished speaking, he passed the baton to Rep. Kevin Brady (R-TX), the chair of the House Ways and Means Committee.

Brady, rather than responding with incredulity to Trump’s absurd statement, simply lauded his leadership and the concept of “peace through strength” before going on to talk about tax cuts.

Brady is one of the smarter and more policy-savvy members of the House, and I wouldn’t dream of insulting his intelligence by suggesting that he actually found Trump’s presentation persuasive. But it was good enough for Brady to feel comfortable continuing to ignore the elephant (or, perhaps, bear) in the room and move on to the GOP’s overriding goal of helping rich people have more money.

That’s been the basic deal between Trump and the congressional party since Election Day. The message of Tuesday’s statement was that the deal still holds.

Clubhouse got a little less creepy thanks to a recent update
The climate crisis and the failure of economics
Trump’s White House is doing a bad job contact tracing its Covid-19 cluster
The pandemic hasn’t stopped Native Hawaiians’ fight to protect Maunakea
A year after his confirmation hearing, Brett Kavanaugh faces a new sexual misconduct allegation
It matters that police officers aren’t wearing masks