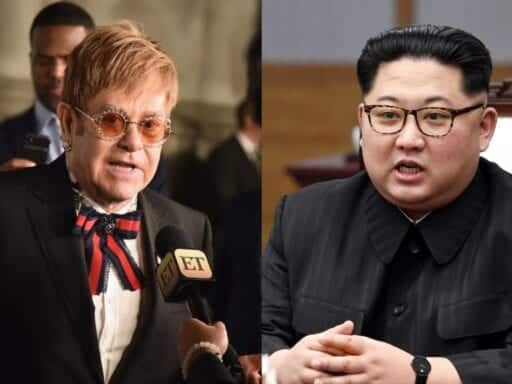 And this time, he brought Kim a gift: an Elton John CD featuring the hit song “Rocket Man,” personally signed by Trump.

South Korean news outlet Chosun Ilbo reported that Trump provided Pompeo a recording of the soft rock song, released on Elton John’s 1972 album “Honky Château,” to give Kim as a little inside joke.

The joke dates from last September, when Trump referred to Kim as “Rocket Man” in one of his tweets.

I spoke with President Moon of South Korea last night. Asked him how Rocket Man is doing. Long gas lines forming in North Korea. Too bad!

But the joke seems to have recently surfaced when the two met in Singapore last month, marking it the first time a sitting US president has met face-to-face with a North Korean leader.

“Kim mentioned that Trump referred to him as ‘rocket man’ when tensions ran high last year,” an anonymous diplomatic source in Washington told Chosun Ilbo. “Trump then asked Kim if he knew the song and Kim said no.”

Along with the CD, Pompeo also gifted Kim a letter from Trump, the Chosun Ilbo report said.

According to NBC News, Pompeo laughed when questioned about the report, giving a vague response that “neither confirmed nor denied” that Trump had ordered him to bring the CD. The State Department did not immediately respond to a request for comment.

It’s more than a little odd for Trump to joke with a dictator about his nuclear and missile arsenal — and even more bizarre that Trump has grown so friendly with a brutal leader who deliberately starves his people and executes his family members at will.

But hey, remember when the two were threatening to bomb each other and comparing each other’s nuclear buttons a mere six months ago? If this is what it takes to avert a full-blown war, then so be it.

The president’s affinity for Elton John can be traced to his 2016 campaign days. At his campaign rallies, songs like “Rocket Man” and “Tiny Dancer” were frequently played. After Trump won the 2016 presidential election, then-White House transitional team member Anthony Scaramucci said Elton John himself would perform at the inauguration at the National Mall. But the British singer’s representative swiftly denied those claims.

Trump also just mentioned the singer yesterday at a rally in Great Falls, Montana, telling the crowd, “I have broken more Elton John [attendance] records. He seems to have a lot of records. And I, by the way, I don’t have a musical instrument. I don’t have a guitar or an organ.”

Nonetheless the musician seems unenthusiastic about the president being a devoted fan.

In response to reports of Trump playing his songs at campaign rallies, Elton John told the Guardian, “I don’t really want my music to be involved in anything to do with an American election campaign. I’m British.”

“I’ve met Donald Trump, he was very nice to me, it’s nothing personal, his political views are his own, mine are very different. I’m not a Republican in a million years,” John continued. The musician’s distancing himself from the president might also explain why Trump signed the Elton John CD himself — instead of, you know, Elton John.

Trump didn’t respond to the musician’s comments at the time, but it doesn’t seem like Trump really cares anyway.

These are the Trump associates who’ve pleaded guilty in the Mueller probe
The big lesson from South Korea’s coronavirus response
Lockdown lifted in Wuhan, America’s largest single-day death toll: Wednesday’s coronavirus news
Do Americans support defunding police? It depends how you ask the question.
The mind-bendy weirdness of the number zero, explained
There’s a surprisingly rich debate about how to define death