Trump goes after Iran on Twitter: “YOU WILL SUFFER CONSEQUENCES” 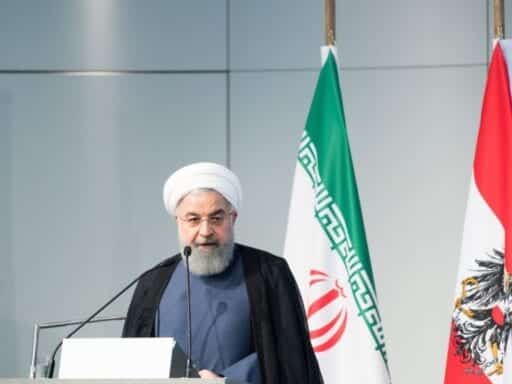 Trump warns Iran to “be cautious” in an unsettling all-caps tweet.

President Donald Trump late Sunday threatened Iran in a tweet, warning Iranian President Hassan Rouhani of “consequences the likes of which few throughout history have ever suffered before.”

The tweet capped off what was one of Trump’s worst weeks in foreign policy since becoming president and is a marker of escalating tensions between Washington and Tehran. Trump withdrew the United States from the Iran nuclear deal in May, and in June, the administration said it would impose sanctions on all Iranian oil importers by the fall. Officials have since moderated that demand.

Trump’s Sunday tweet, which seemed to arrive almost out of nowhere, was an all-caps declaration of potential dire consequences for Iran. “We are no longer a country that will stand your demented words of violence [and] death,” Trump tweeted. “Be cautious!”

“Do not play with the lion’s tail or else you will regret it,” he said.

Rouhani’s speech was itself reportedly a reaction to a wave of speeches and online communications the Trump administration had launched to destabilize Iran and pressure it to end its nuclear program.

Prior to Trump’s Sunday tweet, Secretary of State Mike Pompeo delivered remarks at the Ronald Reagan Library in Simi Valley, California, and there, he took aim at the Iranian regime. “The level of corruption and wealth among regime leaders shows that Iran is run by something that resembles the mafia more than a government,” Pompeo said.

Iran’s state-owned news agency IRNA brushed aside Trump’s tweet and described it as a “passive reaction” to Rouhani’s remarks, according to the Associated Press. It also said Trump was copying Iranian Foreign Minister Mohammad Javad Zarif, who in the past warned the West to “never threaten an Iranian.”

Trump used to talk about Obama attacking Iran as a distraction

The timing of Trump’s Iran threat is curious, as it lands after a week of criticisms of his performance at the summit with Russian President Vladimir Putin in Helsinki. Before arriving at the White House, Trump said on multiple occasions he believed President Barack Obama would initiate conflict with Iran to shift attention away from other weaknesses.

@BarackObama will attack Iran in the not too distant future because it will help him win the election. If the… (cont) https://t.co/WEJd30pR

Remember what I previously said–Obama will someday attack Iran in order to show how tough he is.

I predict that President Obama will at some point attack Iran in order to save face!

Remember that I predicted a long time ago that President Obama will attack Iran because of his inability to negotiate properly-not skilled!

Trump’s tweeted threat to Iran has echoes of his treatment of North Korea. Last year, he warned Pyongyang that if there were any more threats against the US, they would be met with “fire and fury like the world has never seen.” He also went after the regime on Twitter.

North Korean Leader Kim Jong Un just stated that the “Nuclear Button is on his desk at all times.” Will someone from his depleted and food starved regime please inform him that I too have a Nuclear Button, but it is a much bigger & more powerful one than his, and my Button works!

Trump could be attempting the same tactic with Iran, but since he already pulled out of the Iran deal, what he’s trying to get out of his rhetoric is unclear. On Monday morning, he celebrated that North Korea hasn’t launched a rocket in months on Twitter.

Trump says he won’t commit to leaving office if he loses the election because of a “ballot scam”
Epistocracy: a political theorist’s case for letting only the informed vote
Game of Thrones’ Missandei controversy, explained
Here are some goats wreaking havoc on a Boise neighborhood
3 winners and 2 losers from the Nevada caucuses
The new Elena Ferrante novel is a bleak portrait of teen girl self-hatred