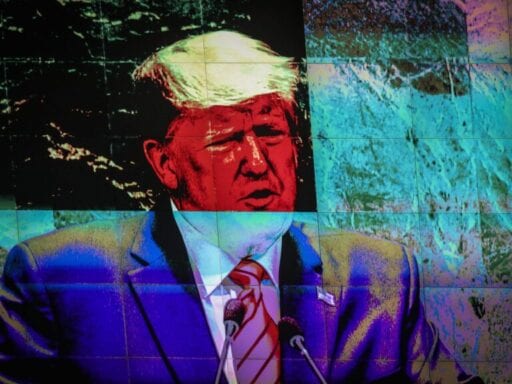 But the world seems to be over Trump’s nationalistic schtick.

UNITED NATIONS, New York — In his third annual speech to the United Nations General Assembly, President Donald Trump delivered a clear message in favor of nationalism and national sovereignty and against globalism.

But three years into Trump’s presidency, that kind of rhetoric is no longer as shocking as it once was. Most of the world has heard it from him before.

Trump, in an oddly subdued speech in New York on Tuesday, reprised his case that all nations should exert their sovereignty, protect their borders, and reject any mutual and international cooperation that doesn’t put their country’s own interests first. For Trump, it’s “America First;” for everyone else it’s “[Insert Country Here] First.”

“If you want democracy, hold on to your sovereignty,” Trump said. “And if you want peace, love your nation.”

Trump touted the “great” new trade deals he’s working on and lambasted China’s trade practices. He criticized the Iranian regime for its “bloodlust.” He tried to elevate his stalled diplomacy with North Korea. He condemned the socialist regime of Nicolás Maduro in Venezuela. He denounced illegal immigration and even made time to complain about perceived censorship of conservative viewpoints by social media companies and to attack social justice advocates.

It was classic Trump — only without the enthusiasm he usually displays when discussing these pet topics. If anything, Trump seemed bored by his own speech.

There were two rare but notable exceptions: Trump’s stern notice to China that the US is closely watching how it handles the unrest in Hong Kong, and his call to end the criminalization of homosexuality around the world.

The rest, though, was standard Trump fare, and few of the world leaders gathered to hear him speak seemed surprised or rattled by his words. He couldn’t even manage to garner any of last year’s surprised laughs.

The world knows by now who Trump is.

Trump’s schtick isn’t shocking anymore. But it shows just how much of an outlier the US is.

“The future does not belong to globalists; it belongs to patriots,” Trump said at the start of his speech.

It seemed like a throwaway line but it was actually a clear articulation of what Trump and leaders of his ilk have been arguing for the past few years: Populist nationalism is the future and multinational cooperation and mutual trust is the past — even if that’s the very vision the United Nations is trying to promote and protect.

And that message has permeated. Brazilian President Jair Bolsonaro, who spoke shortly before Trump, cited the US president’s defense of the sanctity of national sovereignty to push back against worldwide criticism of Bolsonaro’s handling of the Amazon fires. “They even called into question that which we hold as a most sacred value, our sovereignty,” Bolsonaro said at one point.

Trump was sandwiched between a slew of authoritarians and wanna-be authoritarians (Bolsonaro before and Egypt’s Abdel Fattah al-Sisi and then Turkey’s Recep Tayyip Erdoğan afterward), and while the US president paid lip service to democracy, his defense of it didn’t fit with his nationalistic rhetoric.

Trump and some of these other speeches stood in stark contrast to that of UN Secretary-General António Guterres, who addressed the crowd before the world leaders began to take the stage and warned of the “disquiet” currently plaguing the world.

He was mostly referring to the world’s problems — armed conflicts, increasing inequality, the threat of climate change. But Guterres’s argument is that nations need to band together to address these challenges and to promote the rights of all citizens, no matter their homeland. Guterres believes the forum to do so is the United Nations.

Trump’s argument is, as it always has been, that every country needs to look after itself.