Trump had 5 clear chances to condemn Putin. He declined them all. 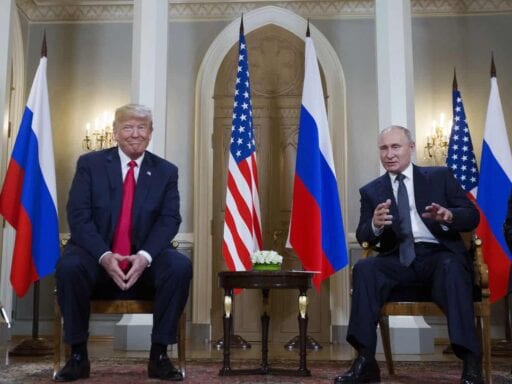 Trump sided with Russia again and again at a Helsinki press conference with the two leaders.

Trump and Putin held a joint press conference after their much-anticipated summit in Helsinki, Finland, on Monday, where reporters pressed both leaders on Russian election interference.

Putin denied Russia had interfered at all in the US elections, saying that “the Russian state has never interfered and is not going to interfere in internal American affairs, including [the] election process.” This, in itself, was not surprising — Putin has insisted before that his government didn’t wage propaganda campaigns and cyberattacks against America, despite the conclusions of the US intelligence community and Mueller’s recent indictments.

But Trump, who has resisted pushing Putin publicly on the issue, did nothing to challenge the Russian leader’s lie. He deflected — and instead attacked US law enforcement, the special counsel probe, Peter Strzok, and Democrats.

Here are five times that Trump had the opportunity to hold Russia accountable, and refused.

Trump set the bar low in his opening statement

Trump gave a vague statement at the beginning of the press conference saying he had “addressed directly with President Putin the issue of Russian interference in our elections” during their one-on-one meeting earlier that day.

He added that they had “spent a great deal of time talking about it. President Putin may very well want to address it and very strongly, because he feels strongly about it. He has an interesting idea.”

A reporter from Reuters brought up Trump’s recent tweet, in which he condemned “U.S. foolishness” for poor relations with Russia. The reporter asked Trump, point-blank, if he held Russia accountable for anything, and if so, what.

We’re getting together and we have a chance to do some great things, whether it’s nuclear proliferation in terms of stopping, have to do it. Ultimately, that’s probably the most important thing that we can be working on.

I do feel that we have both made some mistakes. I think that the probe is a disaster for our country. I think it’s kept us apart. It’s kept us separated.

There was no collusion at all. Everybody knows it. People are being brought out to the fore. Virtually, none of it related to the campaign. They will have to try really hard to find something that did relate to the campaign. That was a clean campaign.

I beat Hillary Clinton easily and, frankly, we beat her and I’m not even saying from the standpoint, we won that race. It’s a shame there could be a cloud over it. People know that. People understand it. The main thing — we discussed this also — is zero collusion.

A reporter asked Putin why Americans should believe him. Trump answered instead.

A reporter later asked Putin why Americans (and Trump) should believe his denials that Russia didn’t interfere in the 2016 US presidential election. He followed up by asking if Putin would consider extraditing the 12 Russian intelligence officers whom Mueller indicted on Friday. Trump responded instead.

He first spoke about how he won the Electoral College by “a lot,” saying, “that was a well-fought battle. We did a great job.” He then had this to say:

But to the average reader out there, they are saying, maybe that does. It doesn’t. Even the people involved, some perhaps told mis-stories. In one case, the FBI said there was no lie. There was no lie. Somebody else said there was. We ran a brilliant campaign. And that’s why I’m president. Thank you.

Trump refused to say he believes US intelligence officials over Putin

Another reporter tried to drill down into the election interference question, asking if Trump believed Putin’s denial of election hacking, or if he believed US intelligence agencies’ evidence. The reporter then asked directly: “Would you now, with the whole world watching, tell President Putin — would you denounce what happened in 2016 and would you warn him to never do it again?”

Trump responded by bashing US law enforcement and delivering a rant repeating a bogus right-wing conspiracy theory about a Democratic staffer’s supposed involvement:

So let me just say that we have two thoughts. You have groups that are wondering why the FBI never took the server, why haven’t they taken the server. Why was the FBI told to leave the office of the Democratic National Committee? I’ve been wondering that. I’ve been asking that for months and months, and I’ve been tweeting it out and calling it out on social media.

I have President Putin, he just said it’s not Russia. I will say this. I don’t see any reason why it would be, but I really do want to see the server. But I have — I have confidence in both parties. I really believe that this will probably go on for a while, but I don’t think it can go on without finding out what happened to the server.

What happened to the servers of the Pakistani gentleman that worked on the DNC? Where are those servers? They’re missing. Where are they? What happened to Hillary Clinton’s emails? 33,000 emails gone, just gone. I think in Russia they wouldn’t be gone so easily. I think it’s a disgrace that we can’t get Hillary Clinton’s 33,000 emails. So I have great confidence in my intelligence people, but I will tell you that President Putin was extremely strong and powerful in his denial today.

The Russian president said he’d heard the rumors but claimed that he “didn’t even know that [Trump] was in Moscow,” referring to Trump’s 2013 trip to Moscow for the Miss Universe pageant.

But then Trump jumped in to defend himself — and used the opportunity to again denounce the Mueller investigation rather than shift any blame to Russia.

“I have to say if they had it, it would have been out long ago,” Trump said, referring to the possibility of Russia having compromising information on him. “And if anybody watched Peter Strzok testify over the last couple of days, and I was in Brussels watching it, it was a disgrace to the FBI. It was a disgrace to our country. And you would say that was a total witch hunt. Thank you very much, everybody.”

Madeline Ngo contributed to this article.

Trump promotes Putin’s take on a “far-fetched” impeachment process
How Biden — or Trump — could win 270 electoral votes
Why meatpacking plants have become coronavirus hot spots
The political power of preexisting conditions, explained
“This is clear rigging”: candidates dispute Pakistan’s election as Imran Khan claims victory
Trump was supposed to change the GOP. But the GOP changed him.