Trump has repeatedly attacked the NFL. That hasn’t stopped players from protesting. 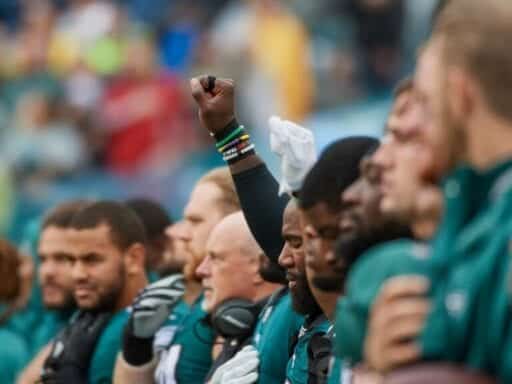 On Thursday, three members of the Philadelphia Eagles remained off the field as the national anthem played.

For the past several months, the NFL and the owners of its 32 teams have been locked in a debate about how to handle players protesting racial injustice before games. The tension is only exacerbated by criticism from President Donald Trump, who regularly slams the protests as unpatriotic and unnecessary. But on Thursday evening, several players continued their protest, once again calling attention to systemic racism and racial inequity.

Philadelphia Eagles safety Malcolm Jenkins and cornerback De’Vante Bausby both stood in the team’s tunnel as the national anthem played, while Eagles defensive end Michael Bennett stayed in the locker room before the team’s game versus the New England Patriots.

Shortly before the anthem, Jenkins appeared on the field in a shirt with the phrase, “You Aren’t Listening,” a phrase that first appeared in handmade posters Jenkins showed reporters in June. At the time, Jenkins said he wanted to call attention to the fact that the meaning of the protest, which aims to bring awareness to racial disparities in America’s justice system, had been lost in attention to Trump’s ongoing criticism of the players.

Players with the Miami Dolphins, Philadelphia Eagles, and Seattle Seahawks also protested earlier this month, during the first week of the NFL preseason, as players and team owners continue to discuss a temporarily suspended NFL policy that would require players to either stand for the anthem or remain off the field if they plan to protest. That protest quickly drew the criticism of President Trump, who tweeted on August 10 that players were protesting “something that most of them are unable to define,” adding that players should “Be happy, be cool!” and stand for the anthem.

The latest protest comes as the future of the NFL’s anthem policy remains in question, as well as how Trump will inevitably weigh in. For the players themselves, their actions in recent weeks show they remain committed to their protest against racial injustice.

Talk of the NFL protests has been consumed by Trump. But that isn’t deterring the players.

In the two years since then-San Francisco 49ers quarterback Colin Kaepernick began sitting — and later kneeling — during the national anthem to protest police violence and systemic racism, the NFL protests have become a high-profile issue.

And as Vox’s Jane Coaston notes, the NFL protests have also become a political hot potato, with the protests serving as one of President Trump’s most favored culture war topics.

This began in 2016 as then-candidate Trump criticized Kaepernick. But it ramped up last year when the president began framing the protests as being about patriotism and the flag. And as this shift has happened, the focus has increasingly fallen less on the issues spurring the protests and more on what the president has to say about the NFL and its players.

This reached its apex in May, when the NFL announced a new policy that would require any players on the field to stand during the anthem. But that policy, which was intended to serve as a compromise, only fueled criticism of the league from both players and the president.

Trump took a range of positions on the new policy in recent months, going from praising the rule to arguing that it didn’t go far enough, only to later settle on the idea that the policy was actually “worse” because it allowed players to opt out of the anthem display entirely. He’s taken a similar tack with discussions of the protests themselves, at one point openly acknowledging that the protests are about racial injustice only to later claim that players weren’t protesting a “real issue.”

All the while, the systemic issues that players are protesting — including the continued police shootings of black men and women, racial disparities in the justice system, and other issues — have only increased in prominence.

“I’m tired of the narrative being about the anthem, about the White House or whatever,” Jenkins told ESPN in June. “The reason that we’re doing any of this is because we have these huge disparities in our criminal justice system; we have this issue of mass incarceration; we have issues of police brutality; our children and access to education and economic advancement is nonexistent in communities of color. And these things are systemic; there are ways that we can change them.”

Predictably, the players’ protests have continued to attract criticism. But if the players’ actions this week are any indication, the NFL protests probably won’t end anytime soon.

Trump to Republicans in Congress: never mind, wait on immigration until after the elections
Where does Weight Watchers fit into a “wellness” world?
Hurricane Lane weakens to a tropical storm as heavy winds and rain continue
Trump was on the receiving end of “lock him up” chants at the World Series
Rodham author Curtis Sittenfeld explains what it’s like to write in Hillary Clinton’s voice
The best $295 I ever spent: Spanish classes as a Latina in Trump’s America