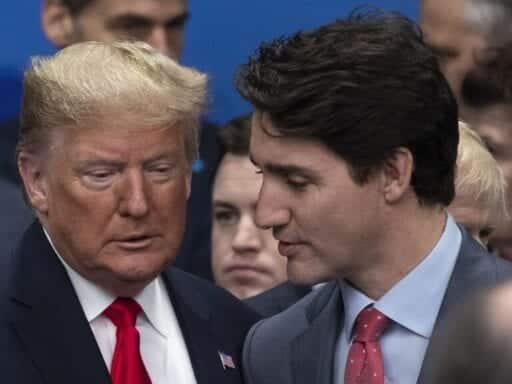 Share
Loading...
Trump and Trudeau together at the NATO summit at the Grove Hotel on Wednesday in Watford, England. | Photo by Dan Kitwood/Getty Images

A viral clip from the NATO summit appears to show Justin Trudeau and others joking about Trump.

President Donald Trump campaigned on claims that the rest of the world was “laughing at” the United States and its leaders, arguing he would get the world to take the US seriously. While almost everything he said along these lines had no basis in reality, Trump became the very thing he used to ridicule during the NATO anniversary celebration in London.

A video posted to Twitter by the Canadian Broadcast Corporation shows Prime Minister Justin Trudeau seemingly mocking Trump during a candid moment at a reception. And other world leaders — including French President Emmanuel Macron, British Prime Minister Boris Johnson, and Mark Rutte, prime minister of the Netherlands — appear to be in on the joke.

“He was late because he takes a 40 minute press conference at the top,” Trudeau is heard saying, apparently alluding to the lengthy and at times tense media availabilities Trump held with Macron, himself, and NATO Secretary General Jens Stoltenberg during the gathering.

“You just watch his team’s jaws drop to the floor,” Trudeau adds in the clip, while the other leaders look on with bemused expressions.

.@JustinTrudeau, @EmmanuelMacron, @BorisJohnson and other VIPs shared a few words at a Buckingham Palace reception Tuesday. No one mentions @realDonaldTrump by name, but they seem to be discussing his lengthy impromptu press conferences from earlier in the day. (Video: Host Pool) pic.twitter.com/dVgj48rpOP

Trump’s name is never mentioned in the clip, but even he seems to acknowledge that the conversation it depicts is about him. Asked about the video during a bilateral meeting with German Chancellor Angela Merkel on Wednesday, Trump dissed Trudeau as “two-faced,” but added, “He’s a nice guy.”

REPORTER: Have you seen the video of Prime Minster Trudeau talking about you?

Trump went on to characterize Trudeau’s sentiments as stemming from frustration over his efforts to get Canada to spend more on defense. But Trudeau addressed this specific concern during his bilateral with Trump, reminding him that “the president knows as well that Canada has been there for every NATO deployment.”

Following the bilateral with Merkel, Trump abruptly announced that a planned news conference at the end of the summit was being canceled, citing the fact that “we did so many over the past two days” — the very thing that seemed to rankle Trudeau.

….When today’s meetings are over, I will be heading back to Washington. We won’t be doing a press conference at the close of NATO because we did so many over the past two days. Safe travels to all!

The Trudeau footage is reminiscent of what happened at the G20 gathering in Japan last July, when cringeworthy footage of Ivanka Trump attempting to interact with world leaders who weren’t having it went viral.

Ivanka Trump appears to be trying to get involved in a talk among Macron, May, Trudeau and Lagarde (IMF head).
The video is released by French Presidential palace. pic.twitter.com/TJ0LULCzyQ

And, of course, Trump has been laughed at by world leaders before — in public. During last year’s United Nations General Assembly in New York City, Trump received an unexpected reaction when he boasted, preposterously, “My administration has accomplished more than almost any administration in the history of our country.”

WOW! The UN audience laughs at Trump after he claims, “my administration has accomplished more than almost any administration in the history of our country.” pic.twitter.com/tXg50ejQqy

The irony of all this is that it reflects how Trump is becoming the very thing he accused Obama of being — “a laughing stock to the entire World.”

We need a President who isn’t a laughing stock to the entire World. We need a truly great leader, a genius at strategy and winning. Respect!

But the spectacle of Trump’s performances at events like the NATO gathering in London — one in which he pushed disinformation about climate change, crudely insulted his domestic political rivals, echoed Putin talking points while making veiled threats against France, and wouldn’t even unconditionally commit to coming to the defense of fellow NATO members if they’re attacked militarily — would be funnier if the world wasn’t at stake.

Vox Sentences: #MeToo leader faces sexual assault allegations
Trump is bragging about his trade truce with China. But it’s unclear what he won.
In a polarized world, YouTube can not remain neutral
Facebook’s latest ripoff product is a Zoom clone called “Rooms”
It looks like Uber is getting into the small loan business for its drivers
Woody Allen’s strange, delayed new movie, explained