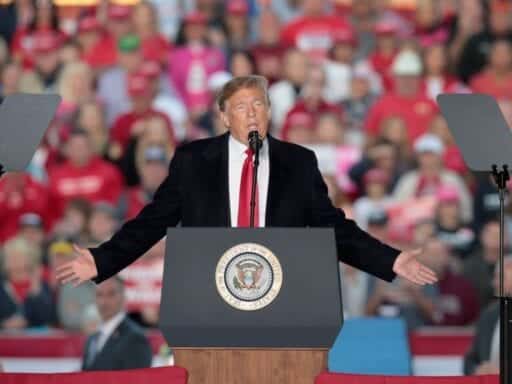 “We can’t allow people like this to become important,” the president told supporters after a gunman killed 11 people at the Tree of Life synagogue.

President Donald Trump on Saturday defended holding a campaign rally for Rep. Mike Bost (R-IL) just hours after a mass shooting in Pittsburgh by saying that “evil people” cannot dictate how we live our lives.

“We can’t make these sick, demented, evil people important… We can’t allow people like this to become important,” he told supporters at the Southern Illinois Airport. “And when we change all of our lives in order to accommodate them, it’s not acceptable.”

Saturday morning, a gunman, later identified by police as Robert Bowers, walked into the Tree of Life synagogue in Pittsburgh and killed 11 people. Six others — including four officers responding to the situation — were injured. The Anti-Defamation League says it’s likely the deadliest-ever attack on Jews in America.

Trump began his freewheeling speech by strongly condemning the incident, calling it “an assault on all of us,” and vowing to fight the “scourge of anti-Semitism.”

“We must stand with our Jewish brothers and sisters to defeat anti-Semitism, vanquish the forces of hate … Through the centuries, the Jews have endured terrible persecution. You know that. We’ve all read it. We’ve studied it. They’ve gone through a lot,” he said. “Those seeking [the Jewish people’s] destruction, we will seek their destruction.”

Those comments were in line with remarks Trump had made earlier in the day, when — after initially suggesting the attack wouldn’t have happened if the synagogue had armed security guards — he condemned the “wicked act of mass murder.”

That shooting made the president consider whether it would have been more appropriate to cancel the event in Illinois. “Frankly, this one, maybe I could have,” he told supporters.

After the terrorist attacks on 9/11, the NYSE did not reopen the following day. Trading remained closed for about a week before it was resumed. President Trump may be referring to the physical location of the stock exchange, a building which was open to maintenance crews the day after the attacks.

Democrats in Pennsylvania, including incumbent Gov. Tom Wolf, cancelled campaign events scheduled throughout the state Saturday. Several states away, Trump called for Americans to “renew the bonds of love and loyalty” that hold the country together, as he campaigned for Bost, who had a solid nine-point lead over his Democratic rival in a recent New York Times/Sienna College poll.

At one point, the president polled the audience about whether he should adopt a more staid tone to reflect the day’s tragic events.

“I’m going to tone it down. Is that okay?” he asked attendees. Loud boos from the audience consumed the hangar.

How to watch all 9 of the 2020 Oscars Best Picture nominees
Why Republican women in Congress might become rarer after the 2018 midterms
Democrats’ debate about automation missed the mark
Should America legalize all drugs? This story should give supporters pause.
Why the right to vote is not enshrined in the Constitution
Can the fire catastrophe make Australia’s government finally act on climate change?