Trump ignored CNN to take a Fox News question. Fox went along with it. 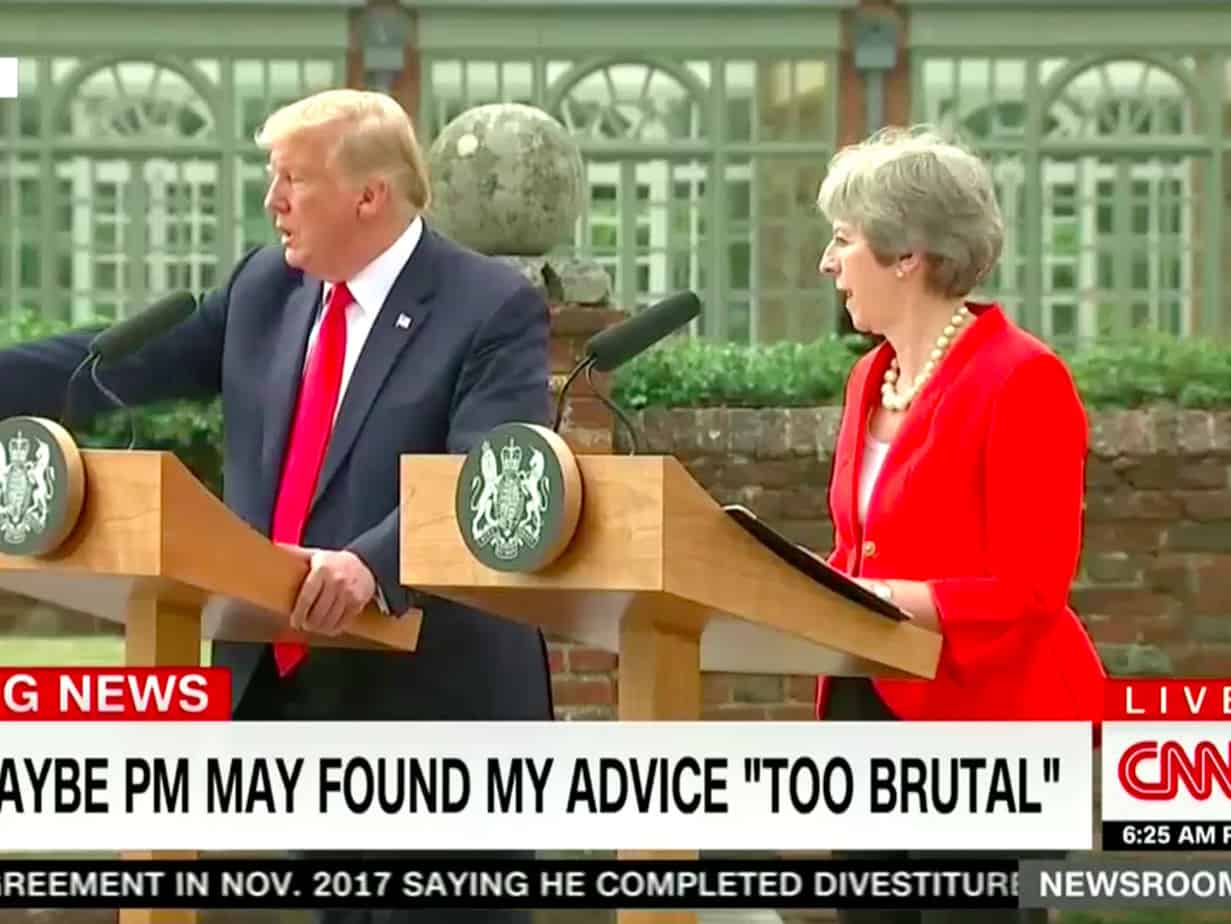 Press corps members used to stand up for each other. Today, it’s every network for itself.

During a joint press conference with UK Prime Minister Theresa May, Trump was as combative as always, including refusing to answer questions from CNN during the conference at the Chequers estate in England:

Roberts thanked Trump and dove into another question about America’s relationship with Russian President Vladimir Putin without missing a beat.

The appropriate response from Fox reporter at that moment? “Mr President, I must object. CNN is a real network.” Fine to then ask Q but to ignore and abet that false claim is journalistic malpractice.

Roberts released a statement later in the day defending NBC’s Kristen Welker and CNN, both of whom Trump accused of dishonesty, after the fact.

“I know [Kristen] Welker of NBC. She is honest as the day is long. For the President to call her dishonest is unfair,” Roberts said, according to the Washington Post’s Erik Wemple. “I also used to work at CNN. There are some fine journalists who work there and risk their lives to report on stories around the world. To issue a blanket condemnation of the network as ‘fake news’ is also unfair.”

Here is the statement from Fox News’s John Roberts, who was selected by Trump to ask a question after CNN’s Jim Acosta was dissed. pic.twitter.com/Wp4PDIP4xg

CNN’s Jake Tapper, among others, pointed out that in the past, other networks had come to Fox’s defense when it was criticized by a presidential administration.

“Old enough to remember when other networks came to the defense of Fox News WH correspondents during the Obama years. Such did not happen here,” Tapper tweeted. “Lesson for the kids out there: no one should ever try to do the right thing with the expectation it will ever be reciprocated.”

Old enough to remember when other networks came to the defense of Fox News WH correspondents during the Obama years. Such did not happen here.

Lesson for the kids out there: no one should ever try to do the right thing with the expectation it will ever be reciprocated. https://t.co/Ym7E94k2Wz

In 2009, the Obama administration was at odds with Fox News. Frustrated with the tone and slant of Fox’s coverage, Obama’s then-chief of staff, Rahm Emanuel, said the network was “not a news organization.” The administration declined invitations to appear on Fox News Sunday.

By the standard of Trump’s current relationship with most media outlets, the feud was tame — Obama said they were “entirely devoted to attacking my administration,” but he didn’t constantly accuse them of being “fake news.” But journalists perceived it as an attack on the press and stood up for their own.

Tapper, in particular, stood up for Fox News in a disagreement with White House Press Secretary Robert Gibbs. Objecting to the Obama administration, Tapper directly questioned Gibbs’s treatment of his “sister network.” Here’s a transcript of that moment in 2009:

Tapper: But that’s a pretty sweeping declaration that they are “not a news organization.” How are they any different from, say —

Tapper: ABC. MSNBC. Univision. I mean how are they any different?

Gibbs: You and I should watch sometime around 9 o’clock tonight. Or 5 o’clock this afternoon.

Tapper: I’m not talking about their opinion programming or issues you have with certain reports. I’m talking about saying thousands of individuals who work for a media organization, do not work for a “news organization” — why is that appropriate for the White House to say?

It wasn’t just CNN — other news organizations criticized the Obama administration and stood up for Fox. Fox, on the other hand, seems to relish in the way Trump has placed its network on a pedestal.

9 charts that explain the coronavirus pandemic
The questions surrounding Trump’s trip to Walter Reed hospital, briefly explained
Pete Buttigieg’s candidacy meant a lot to LGBTQ Christians like me
Amy Coney Barrett’s Judiciary Committee hearing is still on, despite the Senate recess
How the US stole thousands of Native American children
Atlanta police shot and killed a 27-year-old black man outside a Wendy’s drive-through