Trump is already talking about another tax bill 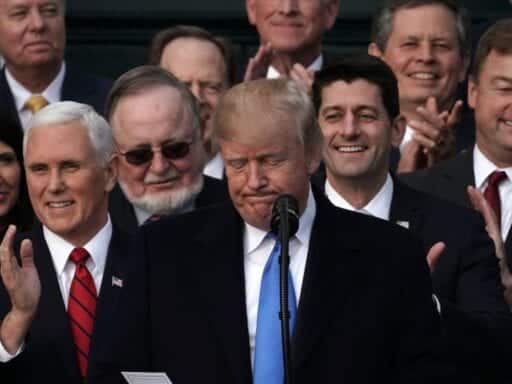 He might want to take a look at the polling on the first one.

The Republican tax cuts aren’t even a year old, nor are they particularly popular with voters. And already, President Donald Trump is talking about more of them.

In an interview with Fox News aired on Sunday, Trump promised a second tax cut plan would be on the way by October. He said the proposal would be aimed at the middle class — then offered an example of reducing the corporate tax rate further.

Here’s what Trump said in the interview with Fox Business host Maria Bartiromo:

One of the things we’re thinking about bringing the 21 percent [tax rate for corporations] down to 20. And then, for the most part, the rest of it would go to the middle class. It is a great stimulus.

Beyond the promise to reduce the corporate rate — which December’s tax bill already cut to 21 percent from 35 percent — Trump didn’t offer specifics on what this new potential legislation might do. Damian Paletta at the Washington Post pointed out that Republicans have floated the idea of making the tax cuts passed last year for families and individuals permanent. Right now, they expire in 2025.

The GOP bill cut taxes for most Americans, including the middle class, but it heavily benefits the wealthy and corporations. According to estimates from the Center on Budget and Policy Priorities, the top fifth of earners get 70 percent of the bill’s benefits, and the top 1 percent get 34 percent. The new tax treatment for “pass-through” entities — companies organized as sole proprietorships, partnerships, LLCs, or S corporations — will mean an estimated $17 billion in tax savings for millionaires in 2018. American corporations are showering their shareholders with stock buybacks this year, thanks in part to their tax savings.

If Trump thinks another tax cut will be a winning issue in the midterms, he might want to take a look at the polls.

Trump is holding out the prospect of another tax bill as the 2018 midterm elections approach, perhaps believing the issue will help Republicans win. But voters haven’t been particularly impressed with 2017’s $1.5-trillion cuts.

In February, a Politico-Morning Consult poll found that most Americans weren’t noticing a tax cut in their paychecks. A Monmouth University poll from June found that the GOP’s tax bill is actually becoming less popular, with 34 percent of Americans saying they approve of it while 41 percent disapprove. That’s down from the same poll in January, when 44 percent of Americans said they approved of the bill and 44 percent did not.

Republicans have struggled to sell the tax cuts to voters now that they’ve passed. (Remember Paul Ryan’s tweet bragging about the public school employee seeing another $1.50 in her paycheck?) They appear to be turning to other messages — particularly, immigration — to motivate voters.

But it looks like Trump doesn’t need to be sold on the tax cuts, or a second round of them. Corporations probably wouldn’t need much convincing either: The Post estimates that additional 1 percent decrease to the corporate tax rate would result in an additional $100 billion in tax cuts over the next decade.