Trump is banning travelers from the UK to combat coronavirus. Domestic travel restrictions could come next. 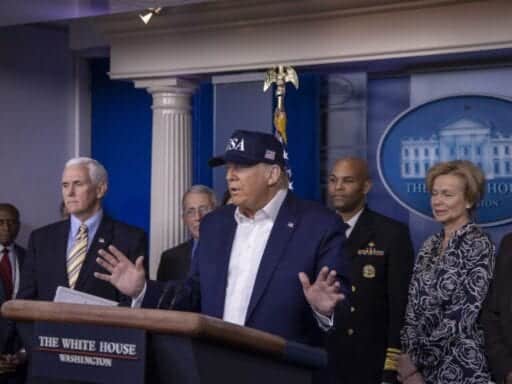 Trump is expanding his European travel ban to the UK starting Monday night.

President Donald Trump announced Saturday that he will expand his European travel ban to include the United Kingdom starting Monday night in effort to curb the spread of coronavirus. And he said he is weighing domestic travel restrictions as well.

Trump began barring entry for all travelers from Europe for 30 days on Friday. Americans returning from Europe who submitted to screenings and citizens of the UK and Ireland were initially exempt, however. He changed course on Saturday, announcing that the UK and Ireland be subject to the European restrictions starting on Monday at midnight ET, based on the recommendations of his public health advisers.

The announcement comes on the heels of Trump’s declaration of a national emergency on Friday — a move that will allow for $50 billion in disaster relief funds to be used to combat the coronavirus. And it also followed the passage of a sweeping House bill on Saturday morning that would offer certain workers access to paid leave should they become infected or need to administer care, provide free testing for the virus, and improve both existing unemployment insurance and food assistance programs.

Those measures came in response to a growing number of confirmed coronavirus cases in the US, and the UK is facing an even more marked increase. The number of deaths in the UK related to coronavirus doubled overnight to 21 total. And the number of confirmed cases in the UK climbed to 1,140. Prime Minister Boris Johnson is consequently expected to ban large gatherings in the UK in an abrupt reversal of strategy — previously, his government made the controversial argument that limiting social contact would not be effective to prevent the spread of the virus. Instead, it argued citizens should be allowed to become infected in hopes of building a broad immunity to the virus.

It isn’t clear whether this policy triggered the Trump administration’s decision, nor is it clear further travel bans will have much of an effect on limiting domestic coronavirus cases.

The time for travel bans has passed

Only a fraction of coronavirus cases in the US are coming from Europe at this point: Trevor Bedford, a scientist who studies viruses at the Fred Hutchinson Cancer Research Center, estimates that the number of new infections generated within the US is higher than the number of new infections introduced by Europeans daily by a factor of about 18 to one.

Preliminary research suggests that travel restrictions are limited in their effectiveness, and were most useful before community transmission became a factor. In the initial phase of the public health crisis, travel bans are believed to have temporarily delayed the spread of coronavirus by a few days. For the US, the small window in which the restrictions can be effective closed weeks ago.

What could be more effective is something Trump hinted at, and a practice that aided China: domestic travel restrictions. Trump didn’t elaborate on what areas of the US could face domestic travel restrictions, but he did recommend that the public avoid non-essential travel domestically. As of Saturday, hotspots of transmission that would seem likely targets for such a ban include Washington state, where there are 510 confirmed cases and 37 deaths, and New York state, where there are 524 confirmed cases and one death. There is already a containment zone in the city of New Rochelle, New York, and the Pentagon has restricted service members’ domestic travel.

”If you don’t have to travel I wouldn’t do it … we want this thing to end,” Trump said Saturday.

Trump also suggested that stores should consider shuttering to limit social contact, praising Apple’s move to close all of its stores outside of mainland China on Friday for at least the next two weeks.

Trump also announced on Saturday that he got tested for coronavirus. In recent weeks, he has come into contact with several people who have tested positive for coronavirus, including a Brazilian official, but has resisted being tested. The results of that test should be available in the coming days, but he said that for now, his body temperature is normal.

The administration also promised additional updates on efforts to conduct mass coronavirus testing through a private-public partnership at CVS, Walgreens, Walmart and other locations Sunday, Vice President Mike Pence told reporters. And Pence also promised more details about a website the administration claims will allow the public to do a risk assessment for infection.

A number of other administration officials also spoke at the conference, and many said once testing becomes more available, Americans should not let a negative test result shouldn’t give them false confidence about going about their lives as normal. Instead, officials said people still need to practice social distancing and regular hand-washing to prevent the spread of the virus.

“When you tell somebody it’s negative, yes, it’s reassuring, but the last thing we want is them so reassured that they stop practicing these critical practices that are going to protect all of us,” Deborah L. Birx, a physician who serves on the White House coronavirus task force, said. “This epidemic will be stopped at the community level.”

Mark Zuckerberg says he’s standing up for you. Yes, you.
Ted Cruz tweets out viral Beto O’Rourke video in a bizarre move
Your Echo is now sharing your internet with your neighbors. Here’s how to opt out.
Taiwan’s single-payer system is popular — but it might be in trouble
A new study on measles reveals a scary side effect: “immune-system amnesia”
Maria Butina, explained: the accused Russian spy who tried to sway US politics through the NRA