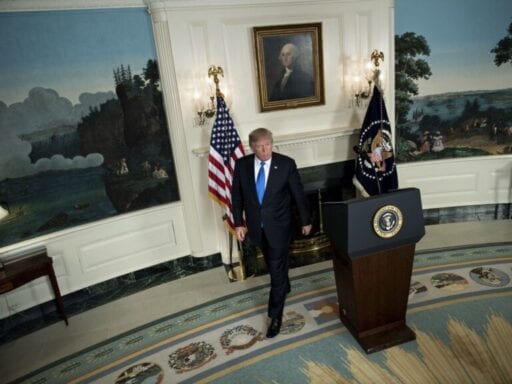 Trump claims an incorrect 2016 election map shows an impeachment inquiry is futile. It does not.

With polls indicating that support for impeachment is rising, President Donald Trump shared a map on Twitter on Tuesday meant to illustrate that he has a much broader base of support than his critics would suggest. The map, however, isn’t accurate.

It is part of a meme Trump shared that purportedly shows all of the counties he won in 2016, on which the words “Try to impeach this” are superimposed. And indeed, the map is mostly red. A closer look reveals that some counties Hillary Clinton won are shaded red, too. More importantly, though, the map means little as it does not account for population; in fact, much of the red area is sparsely inhabited.

The intended implication behind the map is clear: although lawmakers are investigating a number of alleged wrongdoings on the president’s part (including allegations he tried to coerce Ukraine into investigating Joe Biden by withholding military aid), Trump is saying he cannot be impeached because almost the entire country is behind him.

But the map is wrong. Some of the counties appear to be miscolored. Alaska, for instance, is completely red, which would suggest every borough in the state voted for the president. This isn’t the case, with Trump and Clinton splitting the state:

This tendency to promote the idea of Republicans having a broad base of support — and even to distort the strength of that support — is not new for Trump. It can be seen in his obsession with crowd sizes and surveys that inflate his polling numbers, but also in the maps he favors.

The tactic is likely to be as unsuccessful now as it was then for the simple reason that the president is incorrect about his base of support: In this case, the map he tweeted doesn’t show what he seems to think it does.

Republicans and those in Trump’s orbit have long been quick to use maps to demonstrate their supposed control over the majority of the country.

Sometimes they have been a bit too eager to do so, as when Eric Trump in a fundraising email shared a map from 538 that was a projection of how the 2016 election might turn out if only men voted.

Of course, both men and women voted, and the election instead turned out like this:

This more accurate map still shows a lot of GOP-supporting districts, and it is one Trump seemingly likes for that reason. So much so, as the New York Times reported, he has kept copies to hand to White House visitors as souvenirs.

And according to Fox News correspondent Trey Yingst, a similar district-based map was hung in the West Wing in 2017:

Spotted: A map to be hung somewhere in the West Wing pic.twitter.com/TpPPDyNFtE

While it is accurate, even this district map isn’t particularly useful for Trump’s point about his support today.

The president’s margin in the electoral college was strong — 304 votes to Clinton’s 227 — and as Time reported shortly after the election, Trump did win far more counties than his rival Hillary Clinton (2,649 to 503, with some adjustments for Alaska and Louisiana not using a county system). But Clinton won the popular vote by about 2.8 million votes, rather undermining the narrative of resounding victory.

In other words, it’s true that the GOP, and by association Trump, have some of the advantages suggested by the map the president tweeted — as is reflected in the party’s current control of the Senate — but support across the majority of US land doesn’t necessarily mean support among the majority of Americans.

Moreover, the 2018 midterm elections showed that Trump’s support is not the same as it was in 2016; a number of the congressional districts that he won during the presidential election were won by Democrats during the midterms, like Oklahoma’s 5th District, Virginia’s 7th, and South Carolina’s 1st.

And as far as impeachment is concerned, the counties outlined on the president’s map do not matter; congressional districts will.

Impeachment will happen in the House of Representatives, a chamber in which the size of a state’s delegation is directly tied to population, not to land mass. This means the red sections in Trump’s map do not mean a preponderance of votes against impeachment; while the map lacks state lines, much of the red mass in the northwest sends fewer delegates to the House than the thin blue line on California’s coast.

All of Wyoming, for instance, is represented by one person: Rep. Liz Cheney, a Republican and Trump ally who could be reasonably assumed to vote against impeachment. But the city of Los Angeles and its surrounding areas send more than 15 congresspeople to the House, a delegation that contains some of the president’s fiercest pro-impeachment critics, like Rep. Maxine Waters.

This means that the president may have fewer allies in fighting impeachment than his map suggests, an idea borne out by the number of representatives who support an impeachment inquiry. By the New York Times’ count, 223 House Democrats support such an inquiry (meaning only 12 do not). They are joined by former Republican and current independent Rep. Justin Amash of Michigan, and Republican Rep. Mark Amodei (who has made it clear he is not calling for impeachment, just an investigation into the whistleblower’s allegations).

Counting Amash and Amodei, 225 — or 51 percent — of the House supports some sort of inquiry. While support for an inquiry or one’s party affiliation does not necessary equate with support for impeachment, it is clear that 51 percent of Trump’s map isn’t blue. Essentially, much like crowd size or with certain polls, the president is once again attempting to show he is mostly supported when that isn’t actually the case.

Why Facebook banned news in Australia
Vox’s guide to the 2020 presidential candidates
Home, sweet, home?
Climate got more time in the Democrats’ first 2020 debate than in all 2016 debates combined
What Chuck Schumer can learn from Harry Reid
Quarantine has changed us — and it’s not all bad