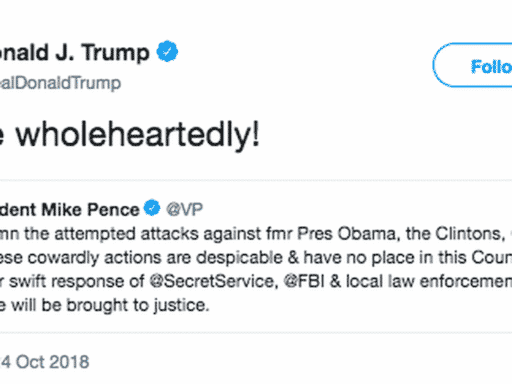 Here is President Donald Trump’s first statement on the bombs sent (according to law enforcement) to Bill and Hillary Clinton, Barack Obama, George Soros, and the New York offices of CNN:

That’s because Trump — on Twitter, obviously — was quote-tweeting a message from Vice President Mike Pence. Pence (or whoever is operating his account) put out an actual condemnation of the attempted attacks, calling it “despicable” and promising that “those responsible will be brought to justice.”

Trump (or whoever is operating his account) literally tagged the president’s name onto his vice president’s statement rather than doing the work himself.

A traditional, nonpartisan function of the president is serving as “Comforter-in-Chief” — responding to national tragedies with stern words for those responsible (if any) and warm words for the victims.

It’s one of the many parts of the presidency in which Donald Trump often seems either uninterested or comically inept. Whether it’s his refusal to unequivocally condemn the (lethal) violence of far-right elements in Charlottesville in 2017 or asking, during an on-site briefing about response to Hurricane Florence, how the site of one of his golf courses was doing, Trump has simply not hit the studiously nonpartisan, uniter-not-divider tone that his predecessors tend to reach for in such moments.

Instead, that duty has fallen to Pence.

When Hurricane Harvey hit Texas in 2017, Pence’s visit was carefully planned so as not to upstage the president — because the victim-hugging, brush-clearing work he was doing was a lot more compelling as a political visit than Trump’s was.

After Charlottesville, he was willing to call out white supremacists by name. Early in the Trump presidency, when a handful of high-profile anti-Semitic attacks was met with a lacking response from Trump, Pence visited a vandalized Jewish cemetery in Missouri to help clean up the damage.

It’s simply accepted, at this point, that there are times when you have to call VP Pence to do a president’s job. When Sen. John McCain died in August, both Trump and Pence sent tweets of condolences to his family — but Trump vetoed sending an official statement of praise for McCain, reportedly initially refused to order flags to fly at half-mast in his honor, and sat with arms folded when asked questions about McCain during a press spray. He was pointedly not invited to McCain’s funeral. Instead, speaking on behalf of the administration was Pence.

Jeopardy host Alex Trebek has died after 36 years of hosting the show
2 high-stakes ballot measures could boost wages for nearly 1 million workers
Where the 1960s “psychedelic” look came from
The many ways Muslim prisoners are denied religious rights in prison
Exit polls suggest significant polarization about the pandemic and its economic fallout
Regulators are trying to get Musk to run his tweets by lawyers. It’s not working.