Trump is following through on his big China trade war threat 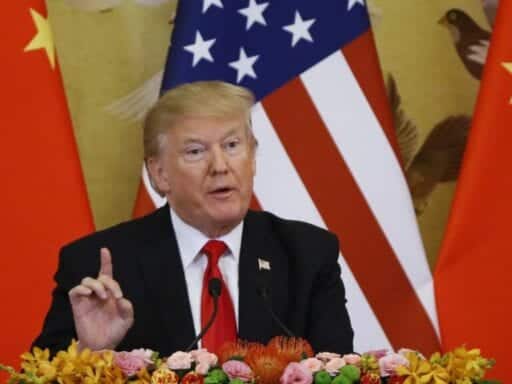 There’s no end in sight for one of the biggest trade wars ever.

Another day, another escalation in President Donald Trump’s ongoing trade war with China.

On Tuesday, the US Treasury Department announced that Trump will impose 25 percent tariffs on $16 billion worth of Chinese goods. The tariffs will hit multiple industries and target around 280 electronic, plastic, and chemical products, as well as motorcycles and railway cars.

The new penalties will go into effect on August 23. In June, Trump said he would place tariffs on a total of $50 billion in Chinese goods. The first round of tariffs, targeting $34 billion worth of Chinese products, went into effect on July 6.

Last Friday, China said it would impose its own tariffs on $60 billion of US products, although it’s unclear when Beijing will officially move forward with its plan. “Any unilateral threat or blackmail will only lead to intensification of conflicts and damage to the interests of all parties,” the Chinese State Council, a government body, said in a statement.

The Trump administration’s announcement on Tuesday is just the latest blow in what the Chinese Ministry of Commerce in July called “the biggest trade war in economic history so far.” The president’s stated reason for doing all this is to lower America’s roughly $300 billion trade deficit with China.

In March, Trump started the trade feud when he threatened to impose tariffs on China. He claimed that China forces American companies to spill US technology secrets if they want to do business with, or in, the country.

At this point, it’s unclear how either side will step back from the brink. That’s not good, because having the world’s top two economies fight each other on the economic battlefield could potentially end very badly for all involved.

Watching Skyscraper is like watching someone play a video game starring The Rock
DIY vape juice mixing is on the rise in the face of a federal vaping crackdown
Here’s the full list of 2020 Emmy nominees
Kris Kobach’s campaign is accused of hiring white nationalists. Trump just endorsed him.
Trump’s expanded travel ban just went into effect for 6 new countries
Trump refuses to say the QAnon conspiracy theory is false