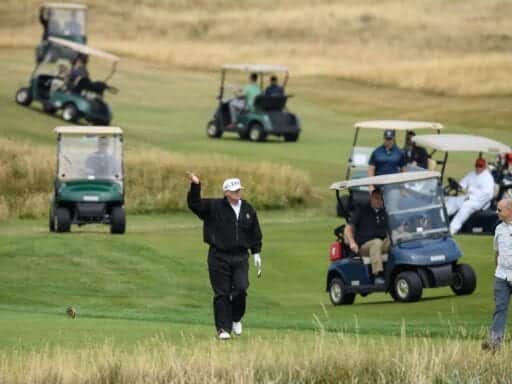 The president would like you to know how ‘incredible” Turnberry is.

President Donald Trump is taking advantage of the down time between his visit with UK Prime Minister Theresa May and his Helsinki summit with Russian President Vladimir Putin to spend some time at — and get some free advertising for — his Turnberry golf resort in Scotland.

He’s touted the property, which has yet to turn a profit after Trump bought it in 2014 for some $60 million, multiple times in the last few days. That puts him in murky territory, ethics-wise.

Trump arrived at Turnberry on Friday evening after mentioning it during a press conference with May earlier in the day. In an interview with British tabloid The Sun, he called the property “magical.”

The president then tweeted about the golf course on Saturday morning, saying he might get in a round, as the “weather is beautiful, and this place is incredible!”

I have arrived in Scotland and will be at Trump Turnberry for two days of meetings, calls and hopefully, some golf – my primary form of exercise! The weather is beautiful, and this place is incredible! Tomorrow I go to Helsinki for a Monday meeting with Vladimir Putin.

It marks a rare occasion that the Trump, who often criticized Barack Obama for golfing while he was president, has actually admitted to spending time on the golf course since his inauguration. He’s spent 169 days at one of his properties since becoming president, including many at his golf resorts, but his aides generally refuse to say what he is doing on the golf course.

The ethics of Trump getting free media for Turnberry are questionable

The New York Times on Saturday reported on Trump’s use of his Turnberry trip to promote it and noted that move has alarmed ethics experts. Norm Eisen, the chairman of watchdog group Citizens for Responsibility and Ethics in Washington, called the stunt a sort of “forced subsidy of an infomercial for his properties.”

Trump separated himself from the Trump Organization, a sprawling conglomerate of hundreds of businesses, when he became president, but he hasn’t divested from it, as ethics experts say would be necessary for him to really be free of any potential conflicts. His two adult sons run the company, but Trump continues to receive reports on the organization as a whole’s profits or losses. One of his sons, Eric Trump, is at Turnberry this weekend, according to the Times.

Both the Times and McClatchy in a separate report point out that Turnberry has not been a winning investment for Trump. McClatchy notes that the Trump Organization lost $23 million on the Scottish golf resorts — Turnberry and Trump International Golf Links in Aberdeen — in the last year it reported data to the UK government. That fact didn’t appear to make it onto Trump’s American financial disclosures, where he reported making money on them. There could be a multitude of explanations as to why:

Still, experts say there could be several reasons the numbers differ — the governments are asking for different information, such as gross revenue versus net revenue, some of the numbers accounted for depreciation while others didn’t or Trump failed to list all business-related debt on his U.S. form.

Kathleen Clark, an ethics lawyer at Washington University’s law school, told McClatchy Trump isn’t checking off all the boxes when it comes to laying out his financial ties on his disclosure forms. “People are supposed to list their personal income. However, I think consensus is that Trump hasn’t done that,” she said.

Trump does these kinds of things a lot

To be sure, this isn’t the only time Trump has used free media attention to plug his businesses — or that he’s been elusive about his wealth.

For example, in September 2016, then-candidate Trump teased that he would finally address his latest thoughts on the “birther” conspiracy theory at a press conference at his newly opened hotel in Washington, DC. He spent most of the conference touting the hotel and at the very end of it said a few sentences about now believing Obama was, in fact, born in the United States. During a press conference to address racist violence in Charlottesville, Virginia last year, Trump brought up his winery, which is located nearby.

How much those and other assets actually total is unclear — Trump has for years inflated his net worth and feuded with Forbes to get the magazine to increase its estimates. But that Trump is getting some free advertising in for Turnberry, and that he might be playing fast and loose with the accounting surrounding it, isn’t exactly a surprise.

Under Amazon, Whole Foods prices were expected to decrease. Instead, they’re rising.
How one California county is criminalizing bad grades
Steve Mnuchin: “We are looking at sending checks to Americans immediately”
The Trump administration’s new plan to privatize Fannie Mae and Freddie Mac, explained
What happens if a presidential candidate dies?
Odd Job: The comedian’s therapist