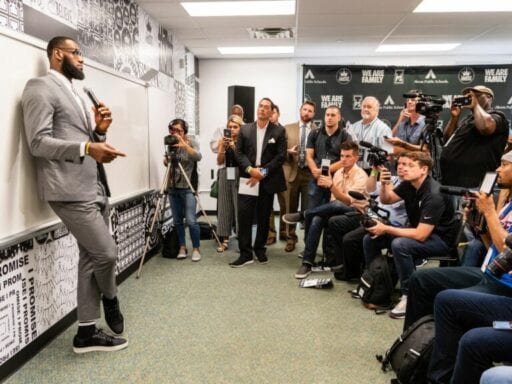 It’s days after the NBA star launched a school for at-risk youth in his hometown.

President Donald Trump yet again stoked his culture war by going after a black athlete Friday. This time, he took aim at NBA star LeBron James, who on Monday sat down with CNN’s Don Lemon to discuss his new I Promise School for at-risk youth in Akron, Ohio.

“Lebron James was just interviewed by the dumbest man on television, Don Lemon. He made Lebron look smart, which isn’t easy to do. I like Mike!” Trump tweeted, seemingly weighing in on whether James’ greatness has surpassed that of retired NBA star Michael Jordan.

Lebron James was just interviewed by the dumbest man on television, Don Lemon. He made Lebron look smart, which isn’t easy to do. I like Mike!

While the interview originally aired on Monday, CNN re-aired it on Friday. Trump apparently tuned in from Bedminster, New Jersey, where he’s currently on vacation.

James discussed multiple topics during his sit-down with Lemon, including politics and race. He said the president is dividing the country over race — and using sports to do it.

“He’s dividing us,” James said. “And what I’ve noticed over the past few months [is] he’s kind of used sport to kind of divide us, and that’s something that I can’t relate to, because I know that sport was the first time I ever was around someone white, and I got an opportunity to see them and learn about them, and they got an opportunity to learn about me, and we became very good friends.”

James also talked about his own activism, which he said began with the murder of Trayvon Martin, an unarmed 17-year-old black teenager, in 2012.

“From that point on, I knew that my voice and my platform had to be used for more than just sports,” he said.

Trump has attacked multiple black figures, including athletes, during his tenure. He has frequently criticized black NFL players for peacefully protesting during the national anthem ahead of football games. He called for the NFL to suspend Oakland Raiders player Marshawn Lynch for sitting during the anthem in November, and he has consistently attacked former NFL quarterback Colin Kaepernick.

At an Alabama rally last September, he said NFL owners should “get that son of the bitch off the field right now” if anyone protests during the anthem.

Marshawn Lynch of the NFL’s Oakland Raiders stands for the Mexican Anthem and sits down to boos for our National Anthem. Great disrespect! Next time NFL should suspend him for remainder of season. Attendance and ratings way down.

Trump also attacked Golden State Warriors player Steph Curry for declining to go to the White House after his team won the NBA championship in 2017.

Going to the White House is considered a great honor for a championship team.Stephen Curry is hesitating,therefore invitation is withdrawn!

James, whose then-team, the Cleveland Cavaliers, lost the tournament to the Warriors that year, defended Curry on Twitter and fired off his now-famous “U bum” tweet at Trump.

U bum @StephenCurry30 already said he ain’t going! So therefore ain’t no invite. Going to White House was a great honor until you showed up!

Lemon in his sit-down with James asked about Trump’s criticism of black athletes and other public figures.

“It’s all wrong,” James said. He later continued, “I believe [Trump] uses anything that’s popular to try to negate people from thinking about the positive things they can actually be doing and try to just get our minds not to be as sharp as possible right then.”

The president has a history of insulting the intelligence of black figures, as he did with Lemon and James on Friday. Trump has on multiple occasions referred to Rep. Maxine Waters (D-CA) as “low IQ.” And he tweeted that someone should “please inform” Jay-Z of his policies after the rapper in January gave a thoughtful assessment of Trump’s “shithole countries” remarks, describing them as “disappointing” and “hurtful” in an interview with CNN’s Van Jones.

Somebody please inform Jay-Z that because of my policies, Black Unemployment has just been reported to be at the LOWEST RATE EVER RECORDED!

The context of all of this: James is opening up a school for at-risk kids

James on Monday, the day the interview originally aired, opened the I Promise School in his hometown of Akron, Ohio. The school, put together by James’ philanthropic Family Foundation and the Akron Public Schools system, will serve low-income and at-risk children.

The school will have longer school days, a non-traditional school year, and more access for students during down time. SBNation’s Christian D’Andrea has a full explainer of the school and what makes it unique here.

”We want every kid that walks through this school to be inspired, to come … away with something, something where they can give back,” James told Lemon. “For kids, in general, all they want to know is that someone cares. And when they walk through that door, I hope they know that someone cares.”

Why Facebook failed its civil rights audit
Beyond family separation: Trump’s ongoing war on asylum, explained
Trump ally David Pecker cuts immunity deal with prosecutors
Why so many Covid-19 variants are showing up now
Kamala Harris was the Democrat you could imagine taking on Trump
The White House reportedly tried to poach a German company working on a coronavirus vaccine