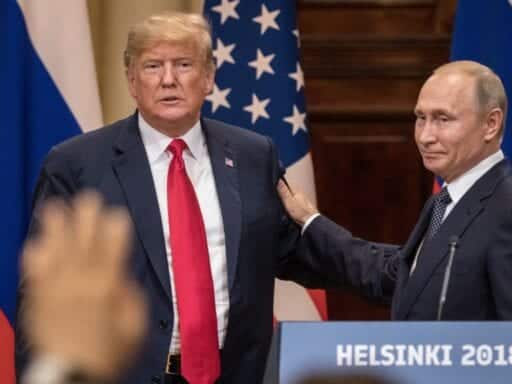 The US president had originally invited the Russian leader to come to Washington, DC, this fall.

Vladimir Putin’s potential trip to Washington, DC, has been postponed.

National Security Adviser John Bolton said Wednesday that the prospective meeting with the Russian leader will be pushed from this fall to sometime in 2019.

“The president believes that the next bilateral meeting with President Putin should take place after the Russia witch hunt is over, so we’ve agreed that it will be after the first of the year,” Bolton said, referring to special counsel Robert Mueller’s investigation.

While Bolton referring to the Mueller investigation using Trump’s terminology of “Russia witch hunt” is remarkable, the delay in this second Trump-Putin meeting isn’t a total surprise.

Putin has been evasive about whether he would accept Trump’s invitation to come to the White House so soon after their one-on-one summit in Helsinki last week. Instead, some of Putin’s aides suggested the two leaders could meet up some other time, like on the sidelines of the G20 summit, which takes place in Argentina in late November and December.

“There are other options (to meet) which our leaders can look at,” Kremlin aide Yuri Ushakov said, according to Reuters. “Maybe there will be other international events which Trump and Putin will take part in.”

Trump’s decision to invite Putin to Washington in the fall after their big summit was something of a head-scratcher in the first place. The two leaders had just met for about two hours for a private sit-down — with just translators present — and it’s still unclear exactly what they discussed, or what the summit achieved.

Trump has offered vague pronouncements about Russia helping with North Korea, and the general need for the two nuclear powers to get along — but any tangible policy decisions are still murky.

Trump had previously said he was looking forward to a second Putin meeting “so that we can start implementing some of the many things discussed, including stopping terrorism, security for Israel, nuclear … proliferation, cyber attacks, trade, Ukraine, Middle East peace, North Korea and more.”

Russia has also mentioned pursuing agreements discussed “in the sphere of international security” — but again, few details have been offered by either side.

Secretary of State Mike Pompeo is testifying on Capitol Hill Wednesday, and is likely to be grilled on just this subject: what Trump and Putin talked about, or possibly agreed to, in private. He’ll likely also have to defend Trump’s statements during the press conference in Helsinki, in which the president failed to condemn Russia for its interference in the 2016 election.

Though Trump has since walked his statements back (sort of), the overall tone of the Helsinki press conference — and his subsequent comments about the Kremlin and its election meddling — indicate that Trump is still sowing doubts about Russia having targeted the US.

It’s anyone’s guess when Mueller’s investigation will actually wrap up (members of the president’s legal team have tried and failed to predict its end several times), and there’s no date penciled in for when a Trump-Putin meeting in the White House might occur.

And there are still plenty of unanswered questions about the need for — and appropriateness of — such a visit in the first place.

Though the Trump administration has been tougher on Russia than Trump’s rhetoric indicates, it’s still concerning that the president would welcome a leader to the Oval Office who’s still actively waging cyberattacks against the US, something Trump’s intelligence officials have said repeatedly.

Plus, two meetings in just a few months? That would be coming on a little strong even if Russia were a close ally — and it’s not.

Stories from a Lost Year
What we know about a reported hunger strike by fathers in immigration detention
How a year of publishing protests rocked the industry
America needs to think more about the costs of policing
What Biden wants to do on immigration, briefly explained
A historic Second Amendment showdown in the Supreme Court dies with a whimper