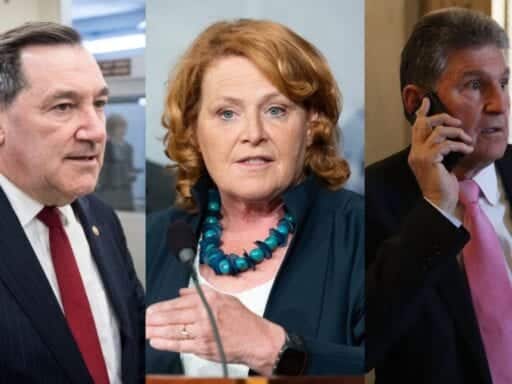 In the looming battle over President Donald Trump’s pick of Judge Brett Kavanaugh to the US Supreme Court, there’s a big question: Can Senate Minority Leader Chuck Schumer keep his Democratic caucus united to vote against the new nominee?

The most closely watched Democratic votes will be the three red-state Democrats who voted for Justice Neil Gorsuch’s confirmation in 2017: Sens. Joe Manchin of West Virginia, Heidi Heitkamp of North Dakota, and Joe Donnelly of Indiana.

All three are facing tough reelection battles in states that Trump won overwhelmingly in 2016, so they’re eager to prove they are working with the president and Senate Republicans. But a vote for a Trump Supreme Court pick risks infuriating the Democratic base in all three states and alienating left-leaning voters. Progressive groups are already planning to lobby moderate Republicans and Democrats aggressively on the issue.

Based on their public statements after Trump’s pick was announced, Heitkamp, Manchin, and Donnelly are keeping their thoughts close to the vest, saying they want to meet Trump’s nominee before making a decision.

We know that Trump is already trying to pressure them: All three were invited to Monday’s Supreme Court announcement at the White House but either declined or were unable to make it. (Sen. Dianne Feinstein, Democrat from California and ranking member of the Senate Judiciary Committee was also invited.)

In a statement to reporters, Donnelly said he first wanted to meet Kavanaugh in a setting where he could ask questions about the person’s “experience and perspectives.”

NEW: @SenDonnelly was invited to WH for SCOTUS but said no. “While I appreciate the invitation frm the White House to attend this evening’s announcement, I declined so that I can meet first with the nominee in a setting where we can discuss his or her experience and perspectives”

Manchin, in a tweet, said something similar. Notably, he mentioned his interest in talking about health care, an issue Manchin cares a lot about and has clashed with Trump on in the past. Health care is expected to be one of the hottest issues during Senate confirmation hearings, given the numerous legal challenges to the Affordable Care Act.

I appreciate the President inviting me to attend tonight’s announcement at the WH. I look forward to meeting the nominee in a setting where we can discuss his or her experience, judicial philosophy & perspective on access to healthcare for WVians with pre-existing conditions.

It’s worth pointing out that Heitkamp, Donnelly, and Manchin stuck with the Democratic caucus on crucial votes last year, including steep GOP tax cuts and the failed Republican attempt to repeal the Affordable Care Act. This vote could be even more crucial, as a Supreme Court justice will make decisions on a wide array of issues.

There are a few more red-state senators who are also facing tough 2018 reelections, but they’re not being watched as closely as Heitkamp, Manchin, and Donnelly because they voted against Gorsuch.

As for Sen. Claire McCaskill (D-MO) and Sen. Jon Tester (D-MT), who represent similarly deep-red states, they voted against Gorsuch last year and have generally been more likely to vote against the Trump agenda than the senators detailed above. Sen. Doug Jones (D-AL), in another very red state, will also face scrutiny in the first Supreme Court vote he’ll cast since being elected last year — though unlike the other Democrats mentioned here, he’s not up for reelection until 2020.

Overall, betting on partisanship is generally a good call for today’s polarized Senate. But this is an unusually momentous vote, with consequences that could last for a generation. Individual senators have enormous leverage here — and enormous responsibility, too.