Trump is still trying to collect citizenship data for redistricting 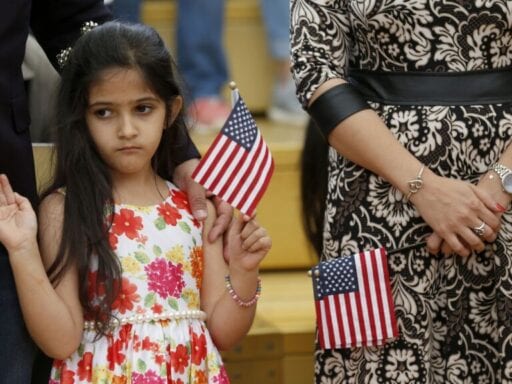 He doesn’t need a question on the 2020 census to determine the citizenship of the US population.

The Trump administration may have lost its bid to include a citizenship question on the 2020 census at the Supreme Court in June, but it’s still trying to collect citizenship data to use in redistricting and advantage Republican electoral maps.

The Census Bureau announced Tuesday that it has asked states to voluntarily turn over driver’s license records, which typically include citizenship data, to determine the citizenship status of the US population.

The move came at the direction of Commerce Secretary Wilbur Ross, who quietly instructed the Census Bureau in July to estimate citizenship data that “states may use in redistricting,” according to an administrative filing first reported by NPR.

The administration was not so transparent about its motivations for collecting the data in court, where it argued that the data would instead aid the Department of Justice’s enforcement of the prohibitions against racial discrimination in voting.

That rationale, the Supreme Court ruled in June, was only a “pretext — essentially a lie offered after the fact to justify adding the question — rather than a real reason for making the decision,” as Dara Lind wrote for Vox. Had the administration decided to continue pursuing the citizenship question, it would have had to race to support its decision with more valid reasoning to print the census forms on time.

President Donald Trump ultimately decided against doing so, instead issuing an executive order in July that instructed the Census Bureau to estimate citizenship data using enhanced state administrative records. The executive order also authorizes the Bureau to collect more data from US Immigration and Customs Enforcement, US Customs and Border Protection and US Citizenship and Immigration Services in an attempt to identify the citizenship status of more people.

States currently draw electoral maps based on total population, breaking up equally sized districts. But Trump suggested when announcing the executive order that citizenship data could be used to instead draw electoral districts in 2021 based on where eligible voters live, as legislators in Texas, Arizona, Missouri, and Nebraska have already sought.

“Some states may want to draw state and local legislative districts, based upon the voter-eligible population,” he said.

Social scientists have argued that doing so would likely hand more political power to rural, Republican areas, and take it away from Democratic, metropolitan areas, where foreign-born populations have traditionally settled.

States already share some administrative records, stripped of all personal identifiable information, with the Census Bureau that include birthdates, addresses, race, whether the person is of Hispanic origin and their citizenship status, the agency said. But they haven’t previously handed over files associated with driver’s licenses, which can include citizenship status.

Advocates from the American Civil Liberties Union, which argued the case against the citizenship question at the Supreme Court, have urged the states not to comply. Some states have already refused to do so, including Maine and Illinois.

Dale Ho, director of the ACLU’s Voting Rights Project, said in a statement that the use of states’ Department of Motor Vehicles data is concerning because it has proven “highly unreliable due to poor database protocols and stale citizenship data,” which could lead to inaccuracies in the Bureau’s ultimate estimates.

Julia Gelatt, a senior researcher at the Migration Policy Institute, said that inaccuracies could also arise if people have common names, write their names differently on various government forms, or move often. In those cases, it’s hard for the Census Bureau to find a match between census data and administrative data.

“Even if they have lots of great [administrative] data with citizenship, there’s still a tough matching process,” she said.

Given the potential inaccuracies in the data and the dramatic implications for redistricting, Ho said that states should reject the administration’s attempt to harvest their administrative data as a “scheme motivated by an unconstitutional discriminatory purpose to dilute the political power of communities of color.”

“The Census Bureau should drop this latest distraction and instead focus on the important work of ensuring a full and accurate count,” he said.