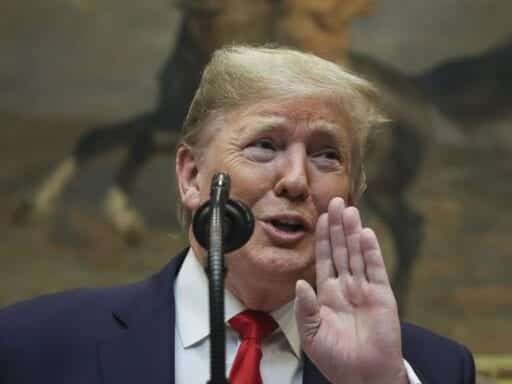 On Twitter, he called the trend “good news” from his administration.

The cancer death rate in the US just took the biggest year-on-year tumble ever — falling 2.2 percent from 2016 to 2017, the American Cancer Society reported Wednesday.

By Thursday, guess who was taking credit for curbing cancer deaths?

Yes, President Donald Trump, who, if you’ll recall, only took office in 2017:

U.S. Cancer Death Rate Lowest In Recorded History! A lot of good news coming out of this Administration.

In reality, the good news about cancer has been part of a decades-long trend decline. From a peak in 1991, cancer mortality has fallen “continuously through 2017,” the American Cancer Society reported,” resulting in an overall decline of 29%,” or an estimated 2.9 million fewer cancer deaths.

You can see that cancer death curve in the chart below:

This consistent drop is remarkable — especially since it’s occurring at a time when overall mortality is trending up. But while the news of yet another year-on-year decline in cancer death is great — it’s been great every year since the early 1990s, when Trump was merely a real estate mogul and fixture on the New York socialite scene.

So what is driving the trend? Part of the story is that there have been huge advances in early detection and treatment of four major cancers — lung, breast, prostate, and colorectal. And that’s helped make these cancers more survivable.

But the other big story has to do with smoking. Much of the increase in cancer deaths over the last century was driven by increases in smoking — which is still the leading cause of preventable disease and death in the US. So when smoking rates declined, a drop in the cancer death rate followed.

“These [trends] reflect the increasing and still increasing awareness about the health hazards of smoking,” Rebecca Siegel, a researcher with the American Cancer Society, told Vox in 2018, “as well as public health policies against smoking that have reduced smoking in public places.” (You can read a great Twitter thread from oncologist Vinay Prasad on why some of the buzz about new cancer treatment breakthroughs driving the decline might be exaggerated.)

In other cancers, the gains haven’t been as dramatic — or there have been reversals. The rate of liver cancer incidence is rising faster than that for any other cancer — a trend the American Cancer Society attributes to the high rate of undiagnosed hepatitis C among baby boomers. The great progress against colorectal cancer is also slowing, a trend that may be explained, at least in part, by the obesity epidemic.

The improvements in cancer death rates are not unique to the US. The largest study of cancer survival trends, published in 2018 in Lancet, pulled data from cancer registries in 71 countries covering 67 percent of the world’s population from 2000 to 2014. They too found cancer survival is increasing in many countries, even for some of the most deadly cancers, such as liver and lung. Trump can’t take credit for those either.

Stacey Abrams breaks down the politics of her Supreme Court thriller
8 states that experts worry are the new Covid-19 hot spots
Childish Gambino’s “This Is America” wins Song of the Year at the Grammys
“It may be that I never go back to the grading system”
Robots aren’t taking warehouse employees’ jobs, they’re making their work harder
Donald Trump is inciting violence